Does an extra four gears and two turbos make up for a lack in capacity? We hit Kroonland to find out.

Having tested the Ford Everest in 2.2-litre manual form back in January 2017, we came back wholly disappointed. The engine produced almost no power unless valves were dancing on the bonnet. The extreme turbo lag meant that pulling away from traffic lights smoothly was difficult and a light flywheel resulted in a vehicle that was easy to stall off-road and frustrating to drive. Unfortunately, during our testing the traction control system on that vehicle, which allows you to input current terrain, also went into limp mode – overall then, it wasn’t completely sorted. 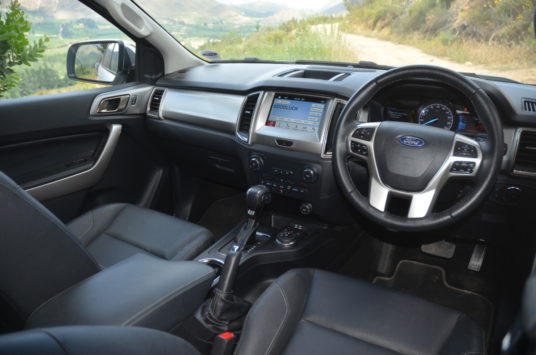 Despite its shortfalls in the powertrain and electronics department, the Everest’s interior was, and still is, best in class. What’s more, thanks to the Watts link rear-end, it handled better on-road than its competitors too.

So here we are two years later, to test the most recent offering with the new 2.0-litre bi-turbo engine, 10-speed automatic gearbox, and an updated traction control system. Ford may have just struck gold. Admittedly, our current XLT test vehicle is a near top-of-the-range model, boasting a very impressive 157kW but just like every other highly-boosted small capacity diesel it will suffer from turbo lag, and that’s where that ingenious gearbox comes in. With 10 speeds to choose from and an extremely widespread of ratios, the box has the ability to keep an engine with a narrow power band on the boil at all times. The result is both decent performance and improving fuel consumption, with our test runs consistently turning in around 9.0-9.3 litres/100km.

We also found that, due to first gear being so short, many off-road situations that would normally require low-range can be done in high, though for extreme scenarios low range is still available at the touch of a button.
Our test route involved extremely steep climbs on a loose, rocky surface at Kroonland 4×4 trail. The loose, steep, and rocky surface was a perfect test for the updated traction control system, which despite being worked very hard never gave up as the previous generation did. 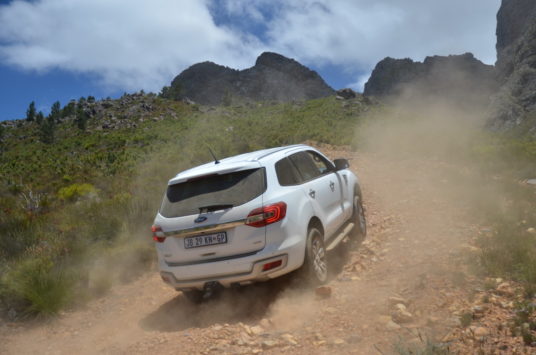 By parking the vehicle on a loose axle twister up a steep incline, engaging rock mode and four-wheel drive with the diff-lock disengaged, the Everest needed about 1800rpm for the system to activate. In situations like switchbacks where traction is an issue, the TC system worked effectively enough to negate the use of the rear locker. However, when it comes to more extreme climbs, the locker was still necessary to reduce wheelspin. It is something you want to have in the off-road armoury.

Though the traction control system is effective, the Everest only offers ‘average at best’ wheel articulation. It scored 393 points on our RTI ramp, a rating behind that of the Toyota Fortuner and Isuzu Mu-X.
As in all engineering problems, everything is a compromise, and while the Everest may not have the best suspension flex around, it does offer the best on-road drive in its class by a decent margin. This is thanks to a very sophisticated and well-sorted rear suspension system with new spring rates and improved anti-roll bars. The Watts Link rear-end is the same you’ll get on the new Ranger Raptor and it helps reduce body roll without increasing spring rates, which effectively means the Everest still offers superb ride quality both over small high-frequency bumps and on big hits.

As before, the Everest’s interior boasts some best-in-class features including the Sync 3 infotainment system. Compared to some rivals this system is simply years ahead. Including Apple Car Play and Android auto, the ability to sync a phone and play music is relatively effortless, intuitive, and powerful. We also applaud the option of Tracks4Africa on the Navigation system too. If we had one gripe, it was that the graphics and ‘look and feel’ of the interface are stuck in 2010, as one commentator would have it. 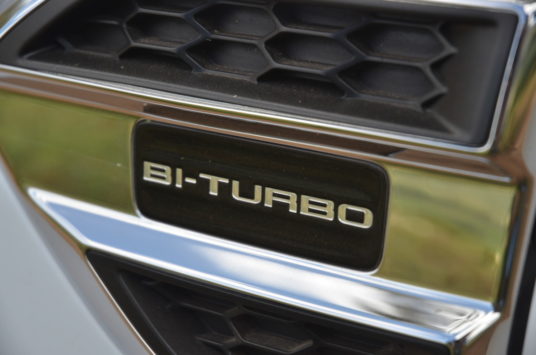 Seven leather-clad seats are extremely plush, as you’d expect from an American brand, and the rear seats fold completely flat – offering a cave-like load space. The third row is also useable, though our six-foot tester said he wouldn’t want to be back there for too long. The new 2.0-litre bi-turbo engine and multi-ratio gearbox is a clear improvement over both the old 2.2-litre and 3.2-litre turbodiesel options, adding to a package that offers high-tech features such as 4×4 terrain response, a superb interior, and a comfortable ride on- and off-road. We found the new-spec XLT model to offer a sweet spot in the range in terms of performance and features for price, though if you are still of the opinion that displacement is king, the 3.2 remains an option in the range.