It seems that every other day a new soft-roader is launched and it’s pretty much the same story: striking looks and plenty of gadgets, but basically a ruse. When you get down to it, they are station wagons in off-roader frocks falsely claiming off-road capability.
Most of them are okay for gravel roads, but what if you want to take on a few Grade 2 and 3 trails, or get safely through a full day’s off-roading in sandy conditions? Say hello to the Compass Trailhawk, Jeep’s attempt at setting themselves apart from the rest of the soft-roader fraternity. It’s one of the only vehicles in the compact SUV segment (unless you consider the Jimny in the sector) that is fitted with low-range, Jeep’s Selec-Terrain™ system, and decent approach and departure angles. On paper the Trailhawk is a genuinely capable off-roader. 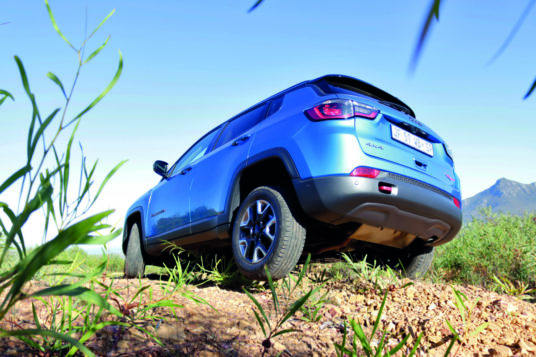 Powered by one of the coolest-named engines, the Tigershark, this 2.4-litre, naturally-aspirated petrol engine has 129kW and 229Nm on tap, giving the Compass enough power in most on- and off-road situations. It’s an engine that needs to rev to deliver its best, which is unusual for a non-turbo engine, but once on the boil, it’s peppy enough. You would think being coupled to a nine-speed ZF-sourced auto box would smooth things out a lot, but the calibration felt less than stellar. We found ourselves self-shifting on a few occasions when progress was bogged by the auto’s too-high ‘eco-sensitive’ gear choice.
The low-range gearbox has a crawl ratio of 20:1 (the Wrangler Rubicon boasts a maximum 77.2:1 ratio, for reference) and the four-wheel-drive system can send all the power to one wheel if required. Assisting the low-range gearbox is Selec-Terrain™, Jeep’s programmed modes defining throttle response and traction control intrusiveness. It brings with it selectable off-road modes for Snow, Sand, Mud, Rock, and Auto. Rock mode is exclusive to Trailhawk-badged Jeep models, while Auto permits drive to the rear axle to be disconnected for improved economy on the road.
After using the vehicle as my commuter for a few days, we took the Jeep to a rocky access road to test its off-road capabilities and assess how the various systems behaved. Our expectations were surpassed when the Compass gamely bombed up and down a few steep climbs with loose surfaces and climbed a few rock steps without excessive wheelspin – needing in most cases no more than a good nudge of the accelerator pedal.
Wheel articulation, as expected, was not massive, but the 4WD systems are designed to overcome this. With one wheel hanging in the air and another wheel not far behind, the traction control kicked in to damp wheel spin, sent torque to where it was needed and it crawled up and over hilly sections with minimal drama. Most of its competitors would not be able to do the same. It must be mentioned, though, that the diffs can take a second to respond. By no means are they slow, but not as fast as you would perhaps expect? 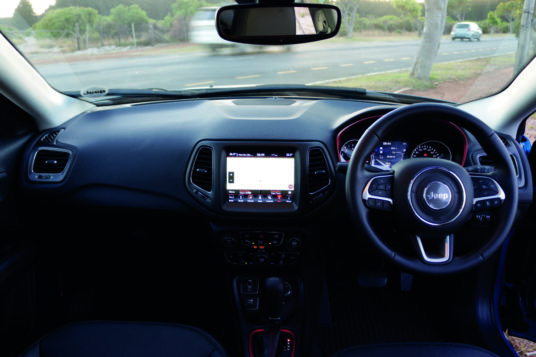 Although a short test, it showed us enough to conclude that we would be comfortable taking the Trailhawk out on a light to moderate 4×4 trail.
More desirable features that set the Trailhawk apart from its competitors are hill descent control, underbody protection in the form of skid plates, and bright red recovery points (two in the front, one in the rear) that contrasted nicely with the Hydro Blue paint job of our test vehicle.
As to sheet metal, our view is that the Jeep’s exterior is quirky enough to not be boring, but is not over-designed like some of its Asian competitors.
On my 40km commute to the office, with the 9-speed automatic gearbox and adaptive cruise control set to just under the speed limit, I managed to get about 7.5 litres/100km. Once off-road though, economy will easily shoot over the 10 litres/100km mark. A smaller turbocharged engine would benefit it immensely in all situations.
The interior is better appointed than many rivals at this price point, with plenty of gadgets and two high-definition displays. It lacks a bit in the quality of some of the minor controls (such as the control stalks on the steering column), making it obvious that some parts-bin sharing has taken place at the behest of the parent company’s accountants. Another unwelcome oversight is that quite a few vehicle controls (including HVAC settings) are hidden within menus on the main display. The loss of traditional buttons, a cost-saving trend echoed in other modern vehicles, means the driver has to take their eyes off the road to make minor adjustments. At least, with the Compass, your attention is drawn away from these little niggles by the panoramic sunroof, snug leather-clad seats, and a stunning 506 Watt Beats sound system. 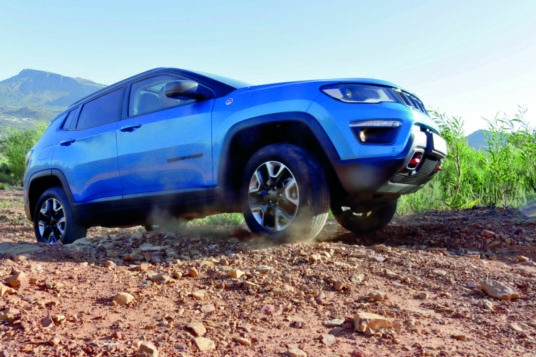 Overall, we really like the Compass Trailhawk. It offers a great package to people who want off-road capability, but do not want the size, heft, and price of a large SUV.