The Amarok is a cleverly-engineered pickup. From launch in 2010, it was a step or two ahead of the rivals in terms of technology, if not ability. Back then, the flagship version used a 120kW 2.0-litre turbodiesel, which was a very different approach to that of its rivals. “The body is too wide, there’s not enough lugging power, the 6-speed gearbox is notchy,” said the doubters, “and where is the 3.0-litre V6 that it needs?” Even so, the little 2.0-litre proved reliable, capable, and able to take on anything the rivals managed in standard form. VW might have been too quick to pre-empt the major downsizing trend with its 2.0-litre turbo motor (which was long established in the T5 Transporter), in line with emerging emissions regulations and a more ecological zeitgeist. It was brilliant on long gravel roads, and pretty much on par in the truly rugged stuff, so it was a surprise the company took another six years to release the 3.0-litre V6 to the public. The basic formula was excellent and, furthermore, VW did not want to steal the thunder from its ground-breaking addition in 2012 – the option of an 8-speed ZF auto gearbox coupled to a version of the 4Motion system with a Torsen centre differential (and 60:40 rear:front torque split) to enable permanent 4WD and, boldly, no low-range transfer box. 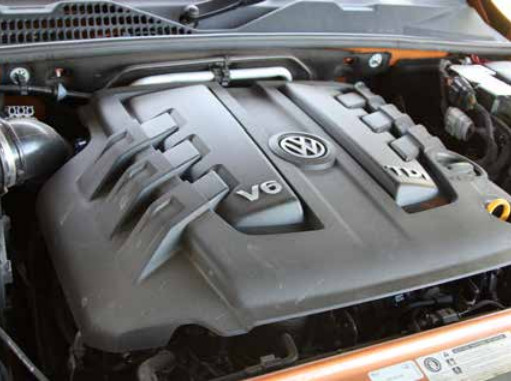 Those doubters were again put on the back foot in the 2017 model year, with the introduction of a 3.0-litre V6 which had done duty in VW Group vehicles from the Touareg to various Audi models. Coupling it to that slick 8-speed gearbox was a revelation in the bakkie world: a diesel that was sophisticated, smooth, powerful from low revs, and very easy at the pumps. Which brings us to 2019 and the burnt orange, look-at-me Canyon Edition of the V6 flagship, cleverly decked-out with signature graphics, grille, side steps, sports bar, and dual-trim seats with orange stitching. And strangely, 17-inch tyres. In our test phase with the Canyon, on the open road we got a consistent 8.4 to 8.6 litres/100km. On our off-road test at Grabouw 4×4 (which provided a direct comparison with the 132kW 4-cylinder 2.0-litre tested recently), the V6 returned 9.4 l/100km. This was not bad, though would be hard to repeat in a real-world travel scenario given the bakkie was unladen and running highway-spec Continental Cross Contact LX tyres sized at 245/65 R17. These looked wimpish in the generous wheel arches and were expressly not grippy enough on loose terrain but, on the upside, provided a nicely-compliant ride. Not only does the V6 accelerate and overtake with emphatic confidence, but it also corners and deals with bumps and craggy roads with SUV-like confidence. It is stiffer and more jittery unloaded than, say, a coil-sprung Navara, so benefits from the addition of a canopy and mild loading. The Canyon edition with its smaller wheels is, in theory, better off-road, given more compliant sidewalls but in fact goes LESS far up our RTI (Ramp Travel Index) ramp than a standard V6 with its 18-inch wheel/tyre combination. Our advice is, as ever, to fit a hardier set of all-terrain tyres. As to ground clearance, the Amarok is not the best but in fact a 5-10mm variance is less significant than the ability to find traction (which is more often a function of tyre choice). 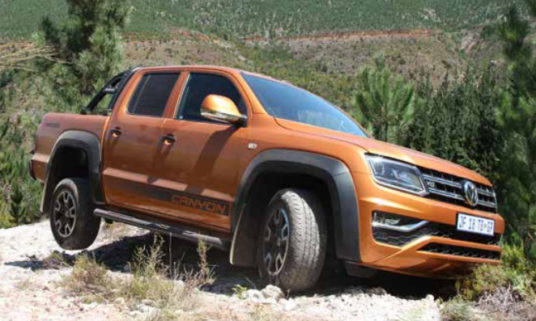 The gearbox is incredible. Leave it be, for seamless shifts up and down. It doesn’t hammer through to a too-low gear on steep downhills after you dab the brakes, for example. It shifts up crisply, keeping the V6 on song, and downshifts smartly when you want to overtake. Also, when using the manual override, especially off-road, it holds the gear you have selected. Frankly, this is brilliant programming, a pleasure to use, and it makes the most of a wide ratio spread that (says VW) obviates the need for a two-speed transfer case. This might be true for milder 4×4 trails, such as the logging tracks of Grabouw 4×4 that we again used for testing. Here, the traction control of the V6 proved quicker to engage than that of the 132kW 2.0-litre Dark Label Edition, probably as it required less throttle. Cross axles were no problem either and, when there was wheel scrabbling, a quick stop to engage the rear diff lock solidly engaged the rear wheels, and it hauled out of a few holes with no sweat. That said, Ford’s having kept a low-range transfer case even coupled to its 10-speed auto has given their Ranger the technological edge. It is useful to be able to properly crawl over more technical rocky sections. The Amarok makes do with the programming of its off-road button. What one notices is that it re-calibrates gearbox settings, so gears are held longer for shifts only at higher RPMs, while the accelerator is less sensitive. It’s hard to assess traction control differences, though we have in the past put the Off-Road ABS braking calibration to the test – when engaged it stops far quicker when hoofing it on gravel. The interior is a treat, though some might find the orange detailing on the seats and trim too much. By my aesthetic yardstick, it is still far and away the most pleasing bakkie interior to live with on a daily basis. The cabin is generously proportioned, there is plenty of room in the footwell for bigger feet, and the seats are broad and firm in a rather German tradition based on a bigger median user. It’s a very wide bakkie (nearly 150mm wider than most of the others) and this translates to comfort upfront and, importantly, in the rear seats as well. The infotainment system is proper VW: excellent graphics, seamless integration, and the right amount of buttons for quick access – none of this business of essential stuff buried deep in a touchscreen menu. 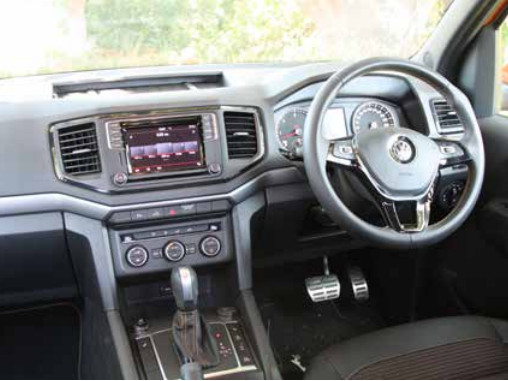 The look, touch, and feel is premium, the execution suitably bold and practical. Proper thought and integrated design have influenced this interior, with subtle but significant improvements since the 2010 launch. Sensibly, for example, there is a 12V GPS outlet atop the dash and just ahead of the gear shift lever, a generous tray for the typical working clutter of mobile phone, keys, wallet, and so on. Yes, the handbrake still contacts the lid of the centre console when pulled up hard, but that’s a small quibble. It may be a decade since launch, but the Amarok’s essential attributes are as fresh and relevant as ever. This is a brilliant vehicle that straddles two worlds with ease: the daily commute in comfort and the hard-working life as a load-carrier. As to off-roading ability, out the box, it is plenty capable. Add some aftermarket items to beef up that ability – think bigger tyres, underbody protection, and armoured bumpers, and you have a competent overlander that can run most places with ease. Just on the Canyon (and Dark Label) add-ons, we would ditch the low-slung side steps, which are there to keep granny and the kids happy when getting in and out at the mall but will be ruined when dropping into a mud hole in the Okavango. In my view, there is little to touch the Canyon, the last swansong special edition of the 165kW V6, before the 190kW version hits this market in the course of 2020. It will then have no output equal in the diesel market now that Mercedes has withdrawn its 350d X-Class. The next version of the Amarok due in 2022, or thereabouts, will be a collaboration with Ford, which makes sense in terms of R&D spend but may well dilute the Amarok’s brand identity. The message: grab one of these while you can; it’s a fine example of fitfor-purpose automotive excellence.