Words and pictures by Patrick Cruywagen

The first cold front of winter has arrived in KZN, and as I take the N2 away from Durban’s warm coast I can feel it. It is defi nitely here. During our fi rst leg stretch at Gingindlovu, the place where Piet Retief and his followers were killed by Dingaan, the icy wind cuts through me like a Zulu’s assegai. Locals tell us there’s snow on the Berg but fortunately we’re headed towards Thangami, which not only has a 4×4 trail but also natural hot water springs which bubble up out of the earth at a bone-warming 41° C. Sitting in a jacuzzi or wallowing in a mineral pool will surely off er some respite from this cold.

The Thangami Safari Spa is roughly 300 km from Durban; the last 30 km of this is on rural and gravel roads. From what we can see, the road builders have moved into the area so who knows how much longer this last section will be gravel. Still, it’s great to be in the countryside, making our way over green hill aft er green hill. 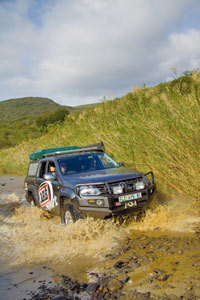 The angami is situated in the Thaka Zulu Game Reserve, so while enjoying the 4×4 routes and activities on offer, you also get to see nyala, zebra, giraffe, blue wildebeest, impala or grey duiker. Leopard spoor have been spotted in some of the more mountainous sections of the reserve, although no-one we talk to has actually seen the beast. Maybe we’d be lucky?

Before trying our hand at some of the more leisurely activities we go and drive the 4×4 trail. Th e map they give us at the start of the trail details four possible routes; they vary from eight – 20 km long, with the hardest and longest one taking up to four hours to drive. From the deck near the restaurant where you look down into the valley, you can survey where you’re about to go and drive.

Little more than 20 years ago this very same landscape looked very diff erent, as then it was a thriving farm. Th en on 28 September ’87, the mother of all fl oods hit this region, leaving 68 000 people homeless and 388 dead. Here at Thangami the mud slid down the hillside, threatening to make its way into the farmhouse. Farmlands became a sandy plain as Mother Nature buried equipment and arable land with mud. Over time there has been some healing but today the sandy soil is still unsuitable for agriculture, hence the establishment of a private nature reserve.

Grey clouds hover ominously above as we head out. Hopefully there’s not another fl ood on the way or we might be stuck here for a few days! Navigation is simple – at each intersection there’s a big red rock with a white number painted on it. Look up the number on the map and you can fi gure out exactly where you are. As this was the end of the rainy season the trail was very overgrown with lots of damage to the tracks. Staff had made an eff ort to clear most of the tracks for us except the toughest section, known by locals as G3; this was a great pity as we would’ve loved to have tested our vehicle on it.

The Black Mfolozi River runs through the reserve and there are fi ve places on the trail where you get to cross it. Th e two crossings we did weren’t too deep or hectic but I’m sure that during or aft er a prolonged bout of rain, they can change dramatically. We were later told that one of the crossings downstream was much deeper, and impossible to cross during the rainy season.

Some skittish zebra hared off upon spotting us as we made our way towards the caves found in the nearby hills. The washaways meant you had to concentrate and think about where you wanted to put your tyres – some had been repaired with rocks placed in the holes. We stopped at the famous mud pools which are said to contain 37 minerals, making it good for the skin. I put my hands into the cold mud which looked like melted chocolate. It was freezing cold, ideal for a summer cool down but no so during this cold winter snap. We decided our faces didn’t need a mud pack and moved on.

The hardest section of the trail we drove was one of the badly washed-away descents, but our Amarok easily negotiated this in low-range. One of the highlights of the trail has to be the mountain section where one climbs up towards several viewpoints. From here one can look back towards where you began. On the way down we passed a bush camp which is popular for those who don’t want to be pampered with facilities, the restaurant or hot showers. Some of the 4×4 clubs prefer this option. 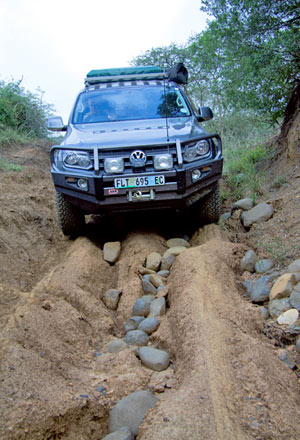 Back down in the valley we tried the short obstacle course near the mud pools. At last we found something we couldn’t climb as the Amarok’s nose hit the bottom of the incline before the tyres could get traction and start climbing. Reversing out left the bottom section of the bull-bar covered in sand, like the nose of a mole when it exits its hole. There was also a see-saw and a pole crossing, both of which were easily negotiated. If you are uncertain when attempting these obstacles get someone to guide you – not everyone has the knack of knowing exactly where their wheels are.

The trail is anything but a vehicle breaker. It has one or two sections which require concentration and good wheel placement but for the most part it’s a gentle nature drive. As for G3, the toughest section of the trail, we cannot comment.

On our way back towards our accommodation we stopped at the crocodile pools. On the day prior to our arrival staff had found a dead nyala trapped in a snare. They had kept it to feed to the crocs, a must-see activity if you’re visiting Thangami. I’m a croc fanatic, they fascinate me. There was a definite pecking order during the feed with the larger crocs having first option on which part of the nyala they wanted. If a young one managed to get more than his predetermined share then a larger croc would just muscle in and take it away.

With the trail driving out the way we decided to indulge in some of the other activities on offer. First up was the foefie slide, something I haven’t done for some time. After putting on a harness and clipping in, I was ready to go. Once off the platform I quickly picked up speed, the earth dropped away and the valley opened up below me.

I was flying across the valley, attached only to a cable. I looked down, and when I looked up again I was already on the other side.

How would I stop? The foefie slide’s ABS system kicked in, consisting of two guys pulling on a rope as you whizz past.

After this fast-paced fun it was time for something a little more sedate. While my driver and friend Bernie Williams went for a massage (his back was killing him) I opted to relax in one of the warm mineral pools. They say that this is where Shaka visited when he felt like a little spa treatment. The smell of sulphur fills your nostrils as you enter the water but after a while you hardly notice it anymore. I could get used to this; it was the perfect way to end a day behind the steering wheel of a 4×4.

Thangami has a shop and restaurant and so we opted to enjoy our last supper on the deck where we could look out over the valley and watch the rain. Suddenly the electricity went off, leaving us in the dark, but soon a big fire was made in the fireplace in the centre of the deck, suitably solving that problem.

I began to realise why Thangami is popular amongst people from the surrounding towns like Vryheid. It had been an eventful day filled with 4×4 trails, crocs, rain, mineral springs, mud baths, a foefie slide and a nice big fire. If I lived nearby I’d also be a frequent visitor.