Words and pictures by Andrew Middleton

Love is an inexplicable thing. It may grow on you over the years, have an immediate dazzling effect, or splutter to life unexpectedly. For Theo, it was the latter case; that first tug at his heart strings happened back in the late 70’s, when Theo was still at school. While most teenagers had idle thoughts of dates, cigarettes and underage drinking, but Theo always had a more adventurous inclination: that of the Land Cruiser kind.

Back then, on one of SA’s sepiatoned summer evenings, Theo got the chance to drive in his friend’s dad’s Cruiser: a new BJ45 with all the bells and whistles. Theo was instantly love-struck; it was this old Cruiser that sparked his lifelong affair with all things Land Cruiser. However, Theo had his heart set on the SWB.

Fast forward some thirty years on, and Theo’s Cruiser obsession was still going strong. By this stage, he’d owned several Cruisers of varying vintage, but at this time the photograph of an Olive Green BJ42 had caught his eye and he was determined to find one. Following six months of campfire banter and tedious internet searches, Theo finally found his perfect match.

The beige-coloured BJ42 in Adelaide (Australia) had seen better days, but as a striking bonus, it was the rare ‘Luxury’ LX model – the Holy Grail of Land Cruiser legends. It had power steering, aircon and various other nice-to-haves, so Theo tucked into his bank account for his future dream rig. Unfortunately, when the Cruiser finally arrived after eight months of importation procedures, it looked far rougher than expected.

Luckily, six of Theo’s close mates had already imported a variety of old Cruisers from Australia. Theo’s Cruiser was the seventh of the bunch to land on SA‘s shores, and no matter what the challenge, his mates from the ‘Legends Club’ were there to help out with valuable knowledge and experience. (Beyond that, when it came down to the hard physical work, it was every man for himself.) After lifting the dimpled body off its rusty perch, Theo set to work with the panel beating and rust removal, doing most of the work in his household garage. 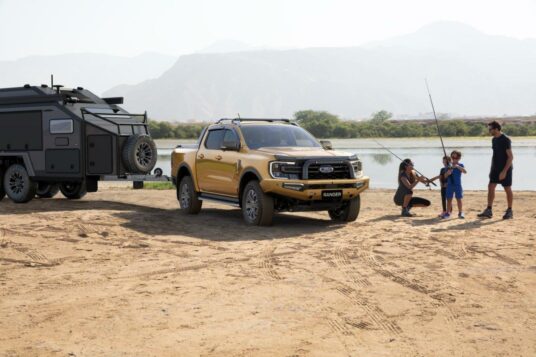