Coined in 1854, the term ‘Ethology’ refers to the study of the way in which an animal’s habits (its behaviour) are related to its structure and habitat.

It is important to note that there is no such thing as typical behaviour, because the typical animal is a mythical beast! However, patterns can be observed, hypotheses devised and tested, and a working interpretation of what an animal is doing obtained. This data can then be extrapolated, to create an accepted ‘normal’ behavioural model for that species.

Without doubt, every person who visits a game reserve hopes to spot an African lion (Panthera leo). The epitome of strength, power and majesty, the lion is known to the Zulu people as ingonyama, which means the master of all flesh. Another Zulu term for a lion is ibhubesi, which comes from the verb bhubeza meaning ‘to make the final decision’, supporting the belief that the lion is king of all beasts. It thus seems fitting to start this series with Shumba (‘Lion’ in the Shona language of northern Zimbabwe) – the greatest ruler of all.

Unusually among the large cats, lions are spectacularly sociable; they hunt together, raise their cubs in nursery groups and defend joint territories. The explanation for this lion sociality was long held to be co-operative hunting, but research published in the late 1990s by scientists from the University of Minnesota showed that lions do not hunt as co-operatively as was originally believed. In fact, lions hunt co-operatively only when they need to. If their best chance for a meal is a large and dangerous prey species such as a Cape buffalo, lions certainly do pull together. But, if the prey is relatively easy for a single lion to capture, the rest of the pride is more likely to ‘root for’ their hunting companion than to join in the hunt! The researchers found that the true hallmark of lions’ social behaviour is their joint defence of a territory, with the primary benefit of living in a group being their numerical advantage in territorial competition. 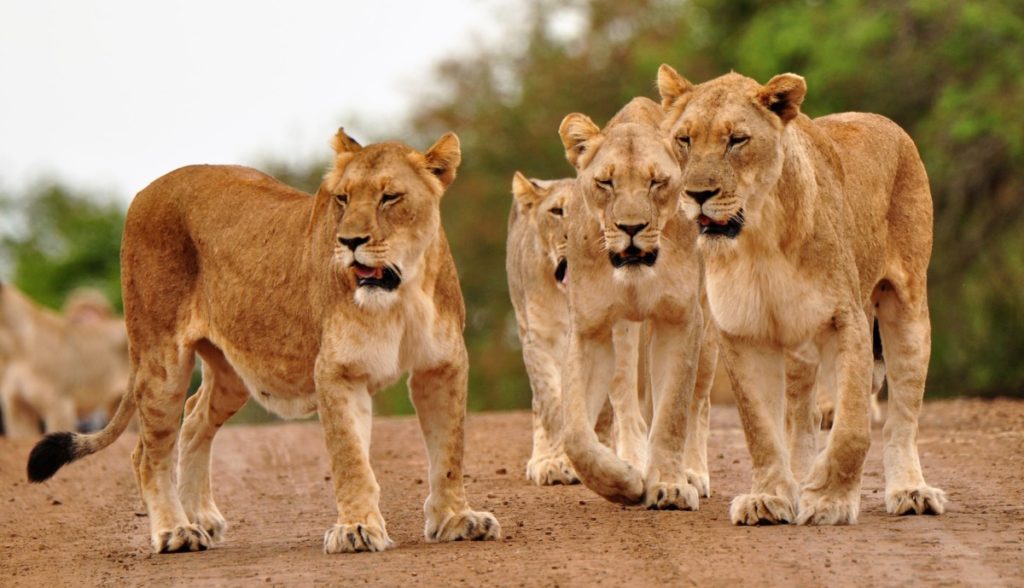 Aside from their sociality, the other behaviour that lions are well known for is sleeping, as the commonest lion-sighting is of a group of comatose cats lying under a shady tree! There are several reasons for this, and high amongst them is the fact that lions may get to eat only once every two or three days, and hence need to conserve energy between meals. They have stomachs that can distend to hold extremely large quantities of meat when necessary, and, given that they are capable of consuming up to 15% of their own body weight per day when they do eat, resting is a good way to make each meal last longer.

Lions are predominantly nocturnal, with a tendency to be active at sunrise and towards sunset. As the sun sets, they undergo a visible transformation, doubling in confidence, and truly becoming a king (or queen!) among beasts. During rainy periods, they are particularly active (irrespective of the time of day) and will often hunt during showers of rain when their prey cannot hear them. Contrary to popular belief, lions do not like hunting on moonlit nights, and are much more successful in securing a meal in dark sky conditions. Before the start of a hunt (or when returning from one) members of a pride participate in ‘contagious activities’ such as yawning, grooming or defecating, behaviours which, when started by one member, will often be followed by the rest.

Lions are best known for their extraordinary roar − a sound that splits the air and sends shivers down the spine. They do, however, have a whole range of sounds which they use in specific situations. A lioness will gather her cubs by softly calling; young cubs meow, and a pride will communicate via a low, growling contact call when members are in close proximity. Both males and females use their roar to communicate over distance; and, in the case of males, use roaring to make their presence known and to warn intruders to stay away. At an ear-splitting 114 decibels (a thunder clap may be 120 decibels) and in the right environmental conditions, a roar can be heard as far as 8km away. That, in and of itself, is enough to gain my ultimate respect and deference!