Home » To See the Elephant

Words and pictures by Chris Collard.

A brisk breeze whipped over the snow-capped peaks of the Ruby Mountains, descending on our camp and prompting us to stoke the fire and put another layer of fleece on. In the valley below, at the edge of the South Sump, coyotes patrolled in search of their nightly kill.

Behind us, to the west, the last light of day faded into a gradient of cobalt, indigo and sapphire. We were camped near Hastings Cutoff (eastern Nevada), one of the numerous pioneer trails of the mid-19th Century. Five days earlier, we’d pulled away from Fort Bridger (Wyoming) in a quest to follow a network of American emigrant trails to California.

As dusk gave way to inky blackness, constellations unmolested by any nearby urban sprawl peppered the cosmos. Our campfire’s dying flames withdrew to a bed of coals and we thought of the adventurous souls of the 1800s and what their lives must’ve been like.

My family didn’t come across the Great Plains in a covered wagon – it was actually a ’38 Plymouth – but I’ve long been intrigued by tales of dusty ox-drawn wagons, bearded mountain men and fortune hunters who ventured west in search of wealth and adventure; young families who piled all worldly possessions into wagons, carts and rucksacks, and sought out new beginnings in Oregon or the gold fields of California.

From Independence (Missouri) or Council Bluffs (Iowa), they set off in wagon trains or on foot, knowing not what the future would hold, but only that it promised a life better than the one from where they’d come.

Many books have been penned on the colourful past of the California and Oregon Trails; I’d read several, as well as hundreds of diary and journal entries from settlers of the 1840s and 50s. But I had yet to follow their wagon tracks and witness what their eyes had seen. 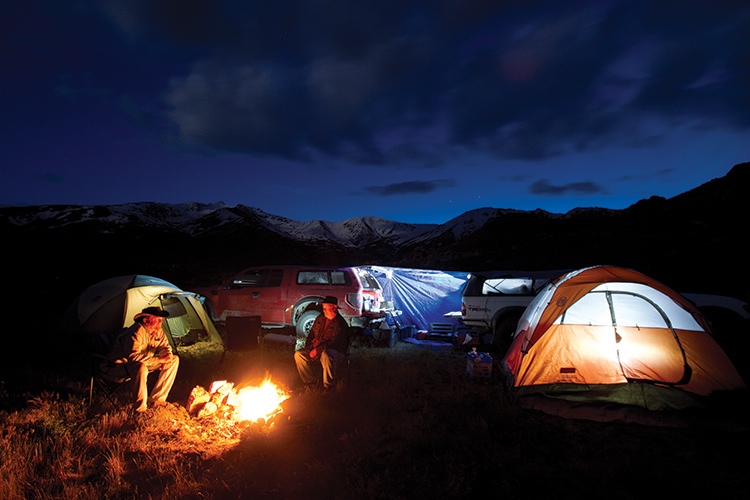 Friends, Matt and Kimber Hoey, shared my curiosity. Over a cold beer one night, we decided it was time to retrace the fading paths of our forefathers, and, perhaps, catch a glimpse of the elephant.

Our final destination would be Vina, a small town at the western base of the Northern Sierra Nevada in California. Vina was the site of Danish emigrant Pete Lassen’s ranch and extensive land holdings. Lassen, in an attempt to draw settlers to the region, concluded that the best way to do so was to become a guide, leading clients across a new, “shorter and easier,” path to California. His route would serve as an appropriate terminus for our 1 600-plus-kilometer overland trek.

As the crow flies, it’s only 992 km from Fort Bridger to Vina. Google Maps pegs the most direct route to be a 1 505 km journey, or a 15-hour drive – but we were more interested in a dirt-road passage from Wyoming to California. The important question was: how long would it take? The plan was to follow sections of the California Trail as best we could, then turn north-west at Lassen Meadows to the Applegate-Lassen Trail, and through the Black Rock Desert.

Back in the 1800s, the phrase “seeing the elephant” became synonymous with overland travel to the West. Seeing the elephant was symbolic, rather than tangible, and embodied an experience of overwhelming emotions – some good, some filled with anxiety, frustration and fear.

Would-be emigrants anticipated ‘seeing the elephant’ with excitement, although most of those who’d actually seen it, didn’t want to see it again. For many, it signified a turning point in their journey – they’d seen it, had enough, and turned around to head home.

After reading of this mythical creature (apparently our trip would not be complete without a sighting), we exerted due diligence to find it…even a track, or a dung drop or two.

The emigrants, like water, followed the path of least resistance, often along relatively flat river valleys. Unfortunately, when automobile travel increased in the early 20th Century, highway engineers followed many of the same routes. Fortunately, though, the West is peppered with mining camps and ghost towns – some living, some long forgotten. We’d use the highway’s encroachment to our advantage, exploring the hidden treasures of America’s Wild West.

With the demands of life’s obligations, we had an 11-day window of opportunity. If we ran out of time, the plan was to return home and finish the trek at a later date.

Fort Bridger, established in 1843 by Jim Bridger and Louis Vasquez as an emigrant supply depot, was a natural starting point for an overland trek to California. The depot was acquired by the Mormons in the early 1850s and later converted to a military post near the end of the decade. From inception, it was a hub for western expansion and used by the Pony Express, Overland Stage, and Union Pacific railroads. Today, Fort Bridger is well preserved and reconstructed, and forms part of the Wyoming State Park’s system. While most emigrant routes are well documented, they often pass through private land, or terminate at a fence or highway. Such is the case when leaving Fort Bridger.

Our first detour was to the once-bustling town of Piedmont, 24 km to the west along the Mormon Trail. In the 1860s, the nearby Utica Mountains were rich in timber and the town’s charcoal kilns became a key provider of fuel for mining smelters in Utah. A half-dozen decaying wooden structures remain, as well as three limestone kilns.

Northwards, through a maze of unmarked tracks and cattle gates, we searched for a place to cross Muddy Creek and pick up the Oregon-California Trail. Progress was slow; and, with one and a half thousand kilometres to cover, questions arose. After Matt had buried his Ford Raptor in a pool of mud, I’d stepped off a 2-foot ledge in search of a suitable crossing, but landed face first in a chilly abyss. Less than three hours into our trip, and we were off to a dubious start. 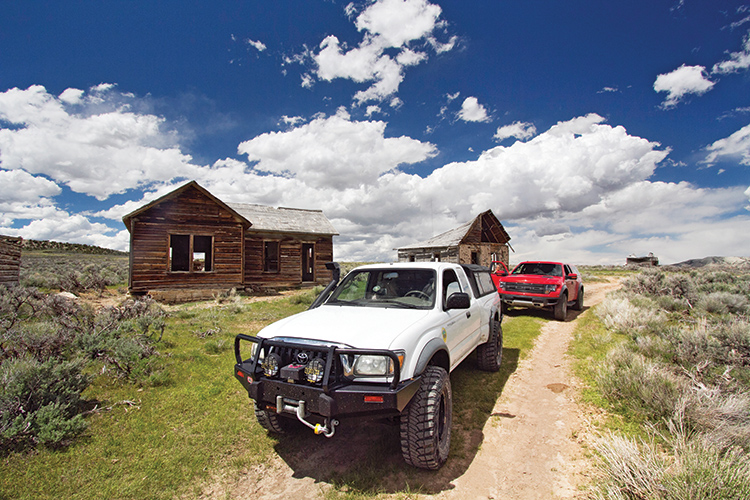 Once we were free from the mud and I’d dressed in clean clothes, the trail presented itself once more, and we drove roughly 50 km to our camp along Little Muddy Creek. We recuperated with a glass of wine around the campfire that night, and read quotes from early pioneers, envisioning their toils, their encounters with Indians, and their dreams of a better life in California.

Exiting Wyoming Territory, we passed the site of Smith’s Trading Post. If there’s one thing that can be guaranteed about an overland trip through the American West, it’s that an interesting story lies around every bend. In 1848, Pegleg Smith, who’s said to have amputated his own leg 20 years before, took a plough and farming tools from Salt Lake City to a small valley on Bear River. Though his farming efforts reaped limited rewards, the 1849 flood of emigrants through his land resulted in a profitable horse, cattle and mercantile business.

The region is woven with creeks, rivers and mountains, all of which were formidable obstacles for settlers. Their path was along the eastern edge of the river, which is now occupied by Highway 89. Admittedly, we were on a fair bit of pavement between Smith’s Trading Post and Lava Hot Springs (Idaho). However, at this point it appeared that we could negotiate dirt tracks through the Elkhorn Mountains, Pleasantview Hills and the Sublett Range.

In fact, if my maps served me correctly, we’d have a clean stretch of dirt all the way to California – save a detour to Salt Lake City airport to pick up my wife, Suzanne.

We erected our tents for the second night in an aspen grove in Pleasantview Hills – east of Jensen Pass. The odometer read 497 km.

With full tanks and fresh provisions, we continued north and west from Salt Lake City to Last Cut, the final obstacle and major excavation for the Union Pacific Railroad before reaching Promontory Point. We camped in a shallow aggregate pit below the cut, which was most likely a source of fill material for the elevated rail bed that threaded its way west across the Great Salt Lake Desert.