Toyota USA builds one-off trailer based on a Tacoma bed featuring a full kitchen, sleeping accommodation and even a bathroom.

The Toyota Tacoma is the choice of off-road and overland enthusiasts in the USA and has served as the basis of countless camper trucks and ultralight pickup campers. Toyota’s lore in overlanding runs deeper than any auto brand out there, with models like the Land Cruiser, 4Runner and Hilux leading expeditions around the world. In North America, the Tacoma midsize pickup reigns supreme. 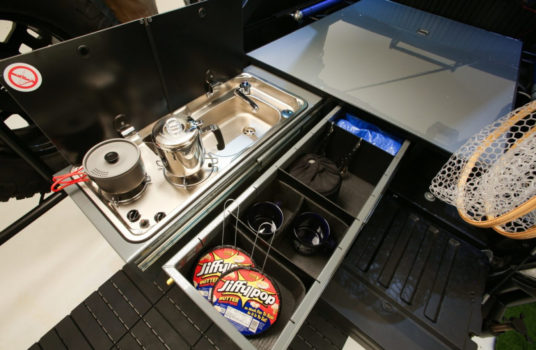 It was this popularity that led Toyota to the idea of creating a Tacoma trailer concept. Bob Kupina, senior program manager at Toyota Motor North America Research and Development, saw a homebuilt Tacoma trailer an overland expo. He liked the idea so much he went back and put a team together to work on an official Toyota version, eventually enlisting help from Motorsports Garage to bring the idea to life.

The team started by mounting a four-person Yakima roof-top tent on a handy scissor lift to give campers some extra height at camp. They filled out the bed itself with a kitchen box that puts a dual-burner stove and sink on one slide and a drawer with rearrangeable organizers on a second slide.

A basic pickup bed isn’t automatically towable. To make it so, Toyota attached a tongue, which doubles as a platform to support the second half of the trailer body. The dual-sided tongue storage box system packs a slide-out Dometic fridge/freezer on one side and a slide-out generator on the other. 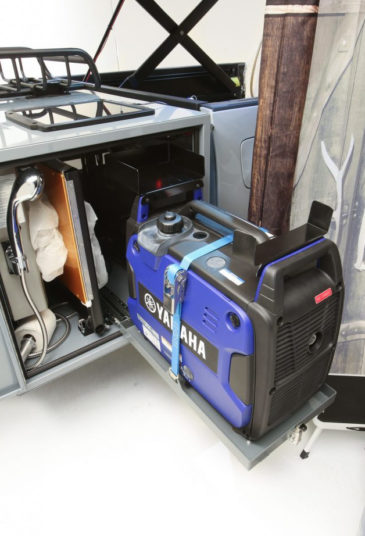 Also included on the generator side is a hot water heater connected to an outdoor shower sprayer. A shower pod hung from the side of the scissor lift drops a hunting-themed curtain down to create a private outdoor shower room and a simple camping toilet with a disposable bag secured below a seat can also be used inside the outdoor stall.
Completing the little base camp are a pair of awnings, Rigid LED area lights and Yakima SunBelt light strips. The lighting and electrical equipment rely on an onboard Optima Yellow Top battery for power, while water rides in 61-L fresh and 57-L gray tanks. 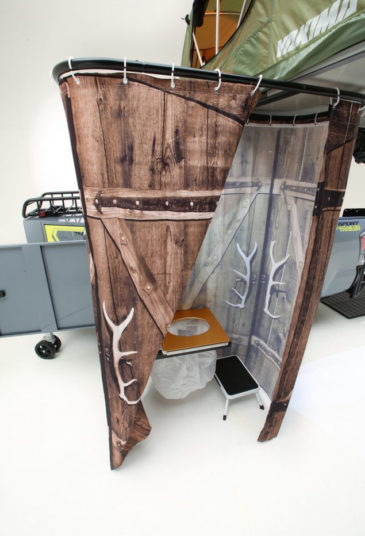 To turn the shower curtain design into a full-blown hook-and-bullet theme, the trailer team added in a fishing rod holder and partnered up with Bass Pro Shops and Cabela’s to outfit the trailer with fishing and camping gear. The gear suite includes fishing nets, tackle and poles; waders and wading boots; and cookware and dishes.
The one thing Toyota’s trailer appears to lack is extra storage space for additional gear, but by freeing up the color-matched Tacoma that photographs so nicely with it, it ensures there’s plenty of truck bed and roof space to handle that. The trailer rides on TRD-Pro wheels with General Grabber X3 285/70/17 tires. 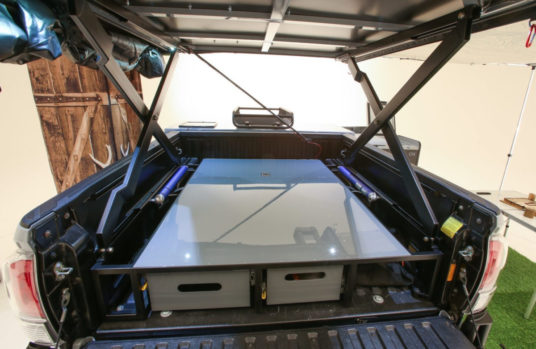