In the dark days of apartheid, banned daily Despatch editor Donald Woods made for the Tele Bridge border post on New Year’s Eve in 1977. Disguised as an Irish Catholic priest, Woods, with the help of an Australian diplomat and an ex-security-policeman, managed to cross the border successfully; and when his family joined him later, they all flew to London.

Although the resort appears to be run by a skeleton staff in summer, and a number of its facilities are closed during this time, guests will still be well looked after in centrally-heated and serviced accommodation.  And, although the main restaurant was closed when we were there, we found the coffee bar-cum-diner and pub more than adequate for our needs.

Perhaps the best thing about the whole deal is the excellent value on offer. Normal summer rates are R495 p.p.p.n, but additional specials offered from time to time can reduce that to a very low R395 p.p.p.n. Campsites with electricity are R150 p.p.p.n.

Apart from doing the “Extreme High Five” passes in a 4×4, on an adventure motorbike, on a mountain bike, or hiking them, there are several other summer activities: from trout fishing to bird- and alpine flower-watching.

I was ruminating about this daring escape and the exploits of other fugitives, the cattle rustlers who’ve operated on the tracks around Lesotho’s borders, as my co-pilot Harvey Tyson and I travelled the rutted mountain roads between Sterkspruit and Tele Bridge. We were en route to Lundin’s Nek to face the “SA’s Extreme High Five” passes challenge (as it is promoted by Tiffindell), and had decided to cram in another new pass on the way there.

Although we got lost a few times on this largely un-signposted road, we eventually did arrive at the Tele Bridge-Lundin’s Nek crossroads. There we celebrated our find, and Donald Woods’s courage, with a tot of fine Irish whisky.

Apart from the engaging driving and spectacular scenery along the roads that skirt Lesotho’s majestic mountain kingdom, it is historical anecdotes like these (another is the capture of the rebel Chief Moorosi) that add layers of intrigue to an adventure like ours.

But if it’s just driving and scenery you’re after, you certainly won’t be bored on the 14.5km Lundin’s Nek Pass (R393). As the website www.mountainpassessa.co.za describes it, this track has “101 bends, corners and curves, including four hairpins, several unbridged stream crossings and very steep, unguarded drop-offs”.

The website calls it one of the most underrated of SA’s big gravel passes, and we agreed. A few sections could well be classified as a Grade 1 4×4 challenge; but, if the pass were wet − or worse, had some snow or ice on it − it could be dangerous or even impossible to traverse.

Soon after we started our descent from Lundin Nek’s summit (2170m), we happened across a police post, a remnant of the past when cattle rustling was a far greater problem than it is today. Yet, however much it’s declined since the days when the Mosotho and Thembe clans traded regular blows over cattle theft and land usage, (hence the “Wartrail” name given to the region we were descending into) farmers still lose stock to cross-border raids.

After the policeman had kindly opened the gate for us and ushered us into the Wartrail region, we were soon surrounded by acres of downy green meadows and fat cattle – in stark contrast to the narrow, badly-eroded and poverty-stricken valleys we had come through.

It is little wonder that some of the 1820 settler families that later moved here from Grahamstown fell so in love with the place, and that it also became known as New England. The region is punctuated with signboards to English-sounding place names like Glen Lyon and Reedsdell, and the owners are often descendants of the original settler families. 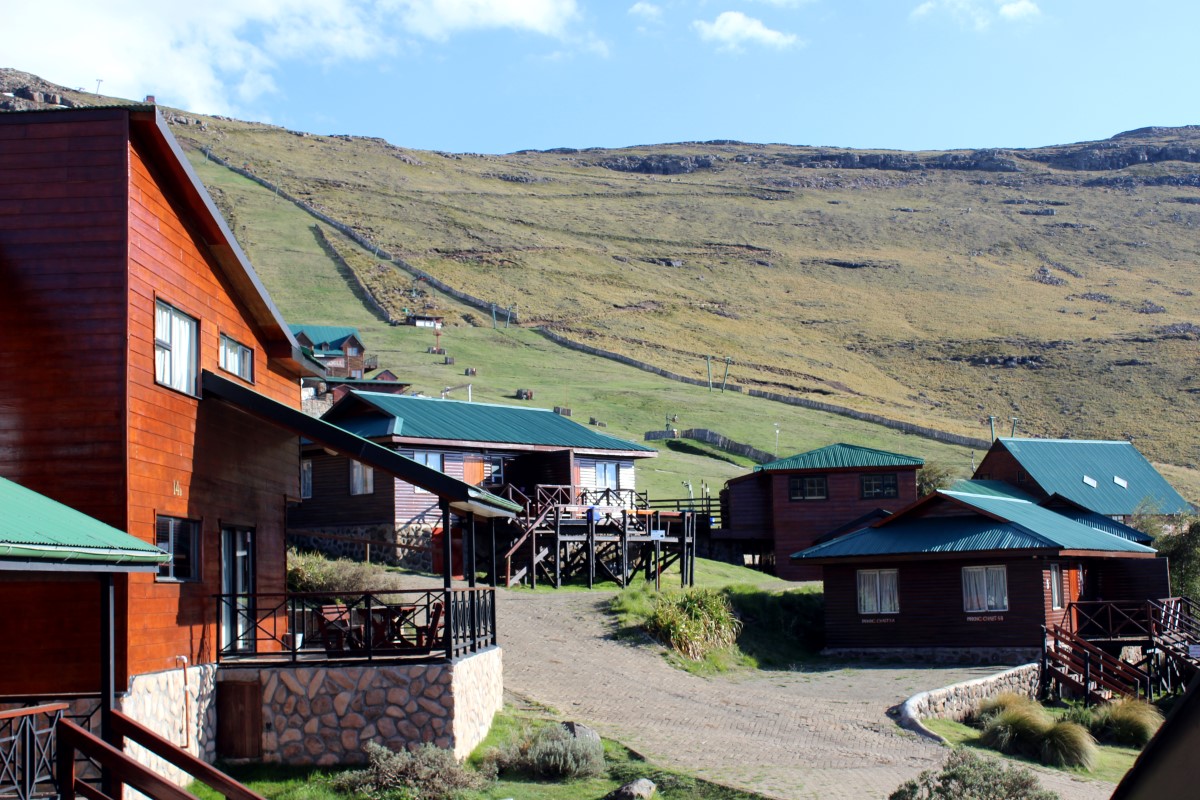 Our accommodation at Tiffindell was sumptuously comfortable.

Most maps I’d consulted did not show the turn-off to Tiffindell from the R393; but, thanks to the atlas in my dog-eared copy of Greg Beadle’s Bike – Tar and gravel adventures in South Africa which I use on my adventure motorbike trips, I figured it would come up about 12km from the Lundin’s Nek summit.

As we passed over quaint stone bridges and willow trees shading trout-rich waters, and past farms with even more quintessentially English-sounding names like Funnystone, Harvey prepared me for the first of our “Extreme High Five Passes”: Volunteershoek. Reading the notes from the Mountain Passes of South Africa website I’d compiled before setting off, he told me that we would be climbing 651 metres over 9.6km (height ASL: 2567 m*) which translated into an average gradient of 1:14; then casually added that the gradient over the first four kilometres was 1:5. (*SA’s High Five brochure labels the height as 2581m.) 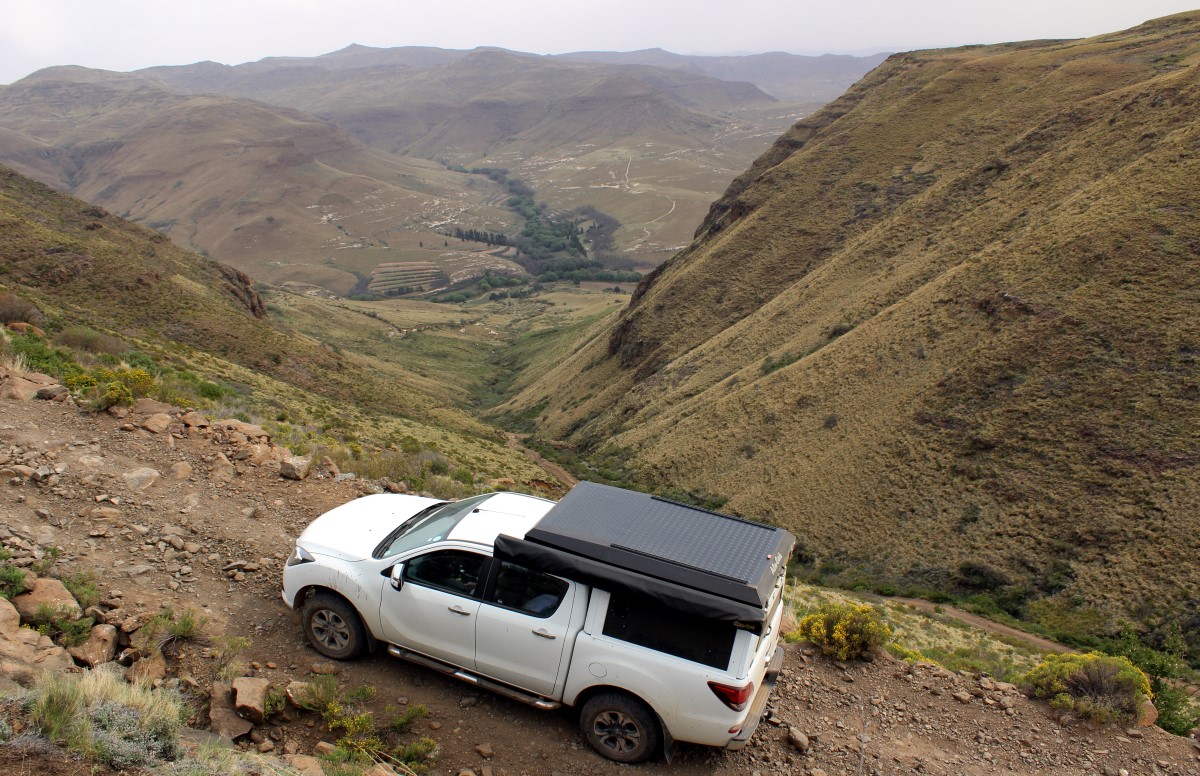 Volunteershoek was the first of our ‘Extreme High Five’ challenge.

With the signboard at the bottom of the pass declaring the way “Open”, I engaged low-range, wedged my foot against the kick-panel, and off we set. The first 500 metres was relatively tame, and the soft-edged scenery beguiled me into believing that the track ahead would be a doddle.

But when you leave the floor of the verdant valley behind, the going gets decidedly tougher; and, as with all dirt track passes, the difficulty factor depends largely on the weather. Pretty much as advertised, all but one of the first four kilometres demanded full concentration, and the views of the Wartrail Valley and its interesting rock formations, particularly Funnystone, were spectacular. 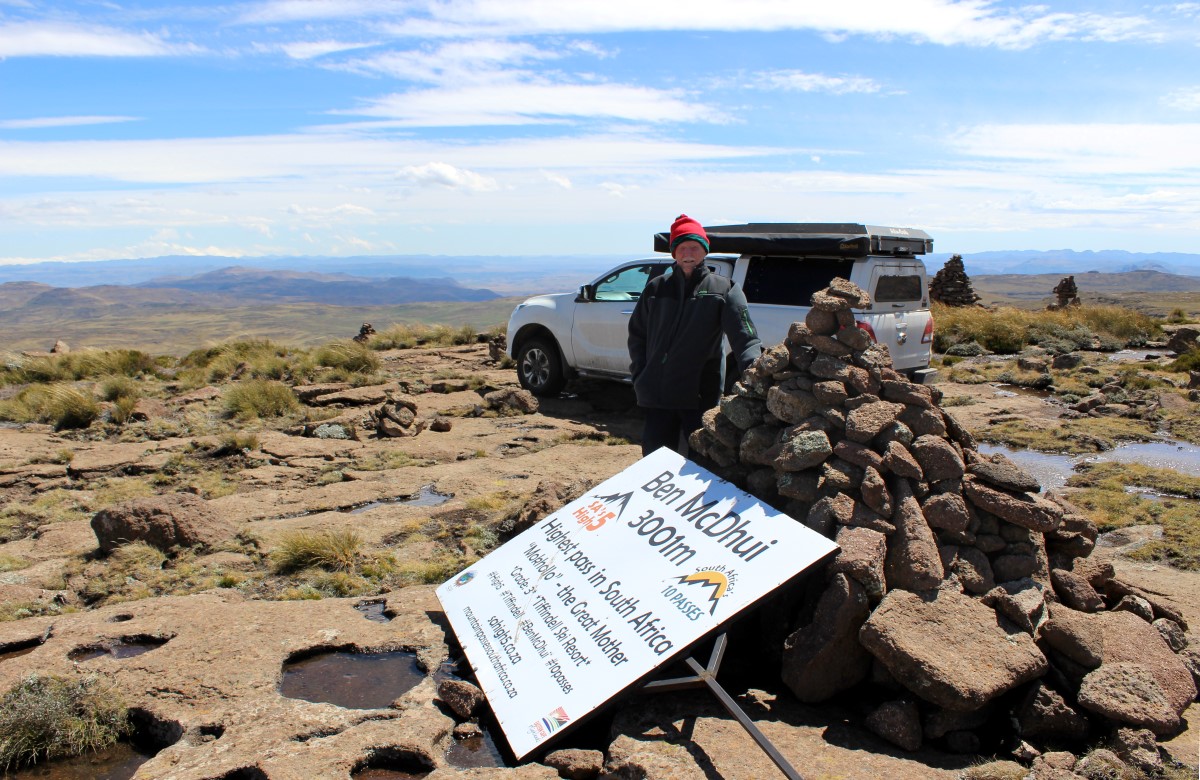 Reaching the 3001m peak of Ben McDhui is a spiritual experience. See the May edition of SA4x4 for the full story.

There is a good deal of conflicting information regarding heights and other claims made on various brochures and other sources I’d gathered, when compared to my trusted  authority in this regard, www.mountainpassessouthafrica.co.za, (MPSA) and I have pointed these out wherever possible. In the end, though, it makes little difference; it’s still a hell of a ride!

The majority of the serious climbs (gradients up to 1:5) start after the first kilometre, and end at around kilometre four. Graded as a 3, I believe that this is a 2 in the dry; but, of course, that would change in extreme weather conditions. * MPSA would say that it’s fifth highest.

The TT, as its affectionately known, is the longest of all the passes we did, and although there are a few challenging patches here and there, it offers no more than a Grade 2 challenge in good weather. But it’s an engaging drive, and offers spectacular views.

As mentioned in the main body of this article, we completed only part of this pass, so cannot comment on the accuracy of the grading along its whole length; but, from the views and driving that we did experience, we would concur that it’s certainly a ‘bucket- lister’. * MPSA says it is the 4th highest, after Ben McDhui, Sani Pass and the TT.

Because the steepest sections (1:3) have concrete tracks laid, this pass can actually be done in a normal sedan which has reasonable ground clearance. But, if the rain comes, you are going to need a 2×4 with diff lock at least; and, if things deteriorate, a 4×4. *Following on from the claim above, MPSA may claim this to be 6th highest.

Like all the other tracks in this collective, this one is rated as a Grade 3, but it’s the only one that (in the dry) deserves this grading, and maybe half a point more in places. Besides a series of tight hairpins and a few challenging surfaces, three quarters of it is quite easy (it climbs only 280 metres in about 4km); but it’s the last push to the summit which will challenge even experienced 4×4 enthusiasts. 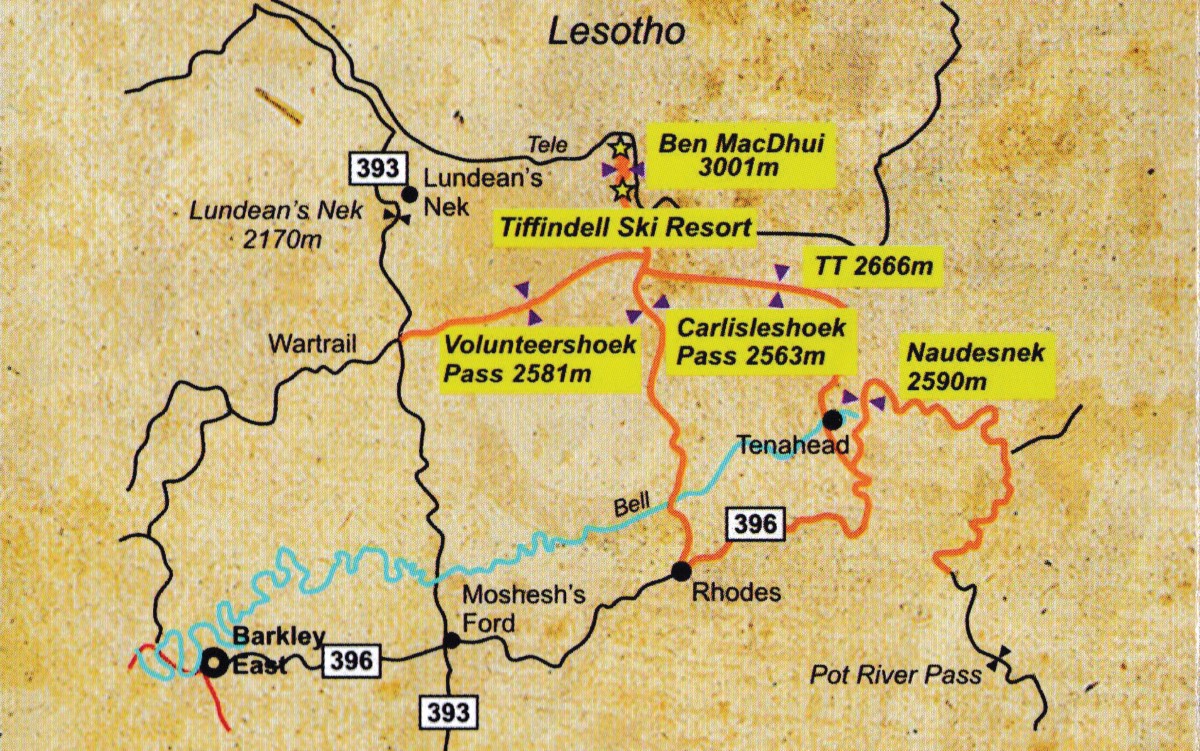 For the full story, be sure to grab a copy of the may issue of SA4x4 magazine!