Just inland of the Tsitsikamma lies a narrow, mystical valley, shielded from the elements by two monstrous mountain ranges. Where the Kouga Mountains clash with the Baviaanskloof, you’ll find an oasis of lush greenery along the otherwise arid outskirts of the Karoo, feeding off rainwater that fell far afield of the fertile valley.

Johan Kriek’s vision, of a fun, challenging event suitable for standard Defenders and all sorts of drivers, has resulted in an incredibly popular event. This year, the convoy consisted of 17 vehicles from all over the country, and all brought together by the love of Land Rovers. Johan revived the Trophy back in 2016, and having seen the success of the 2018 edition, there’s no doubt it’ll continue for years to come. Visit www.defendertrophy.com for more information.

The Baviaanskloof is so peculiar, in fact, that it forms part of the Cape Floral Region World Heritage Site. In all, the area is home to an incredible seven of the eight major biomes of South Africa: ranging from fynbos on one side all the way to savanna on the other. It’s no surprise, then, that organiser Johan Kriek saw it as the perfect setting for the 2018 running of the Cape Defender Trophy.

Armed with a solid Defender 110 hardtop from the kind fellows at Pon Steyn 4×4, also the Trophy’s main sponsor, I collected good ol’ Richard from his hamlet home and belted along the R62 and N9 towards the rendezvous point for the start of our epic trek. We’d be spending the night at Grootrivierpoort, at the east end of the valley, before making our way down to Patensie, the real starting line.

Grootrivierpoort provided all participants with the opportunity to get acquainted with one another, and with the nature of the challenge ahead. One by one, Defenders trickled into the picturesque campsite, until eventually we had all gathered around the fire, eager to down some chops and dops in anticipation of the long haul ahead.

Despite the name, the Defender Trophy isn’t a driving competition. Far from it, in fact! Anyone planning to pilot a rickety old Landy through the Baviaanskloof needs to be a competent off-roader, but the Trophy tests your mind far more than your donga-dodging.

At the start of each day, each team is given a quiz sheet with questions tied to specific GPS locations along the route. You really need to know your nature – and your Land Rover history! The quiz keeps things exciting during the long sections of tricky trails, and the promise of epic prizes keeps the competitive spirit fierce.


Participants ranged from thrill-seeking families, like Patrick Lawson and his two boys, to event sponsors taking a more hands-on approach, like Ryler Masterton of Masterton’s Coffee, and Arno Steyn and his Pon Steyn crew. There were some familiar faces, too! Justin Bean and Samantha Frost seemed pretty chuffed with the Ironman 4×4 gear they had won through our #SA4x4OverlandImages Instagram competition.

After a quick briefing from Johan and frantic plastering of sponsor stickers on our already-filthy vehicles, it was time to set off for Rooihoek Campsite − via Patensie and a large chunk of the Baviaanskloof Nature Reserve. After refuelling in the small town, we entered the reserve and prepared for our minds to be blown. We weren’t disappointed.

The day gave us lush, green valleys and Nguni cow-specked hilltops in equal measure, with plenty of photo opportunities around each bend. It’s quite tough to keep your eyes on the road when there’s such immense beauty in every direction! We were thankful, though, that the first day passed without incident, despite the state of the trail on the approach to the campsite.

Rooihoek, as the name suggests, lies on the banks of a particularly picturesque bend in the Kouga River. It’s maintained by Eastern Cape Parks, and features little more than well-worn stands and a couple of conspicuously door-less eco loos. What more could you ask for?

The river has carved its way through the mountains, and the freshwater is so fresh, in fact, that it makes a good bath after a long day of bundu-bashing. Just ask resident Defender Trophy maniac, Nick Smart!

The nature of the campsite meant that there would be no big campfire for the evening, but Richard and I did sit down for a fat chat with Len van der Merwe and Andre Fourie, two Noord-Kaapenaars who embody the spirit of the event – exploring new, exciting places with like-minded Landy lovers. It’s great people like them that make these gatherings worthwhile. As Richard says, other manufacturers must ‘itch with envy’ of the camaraderie found between Land Rover owners. 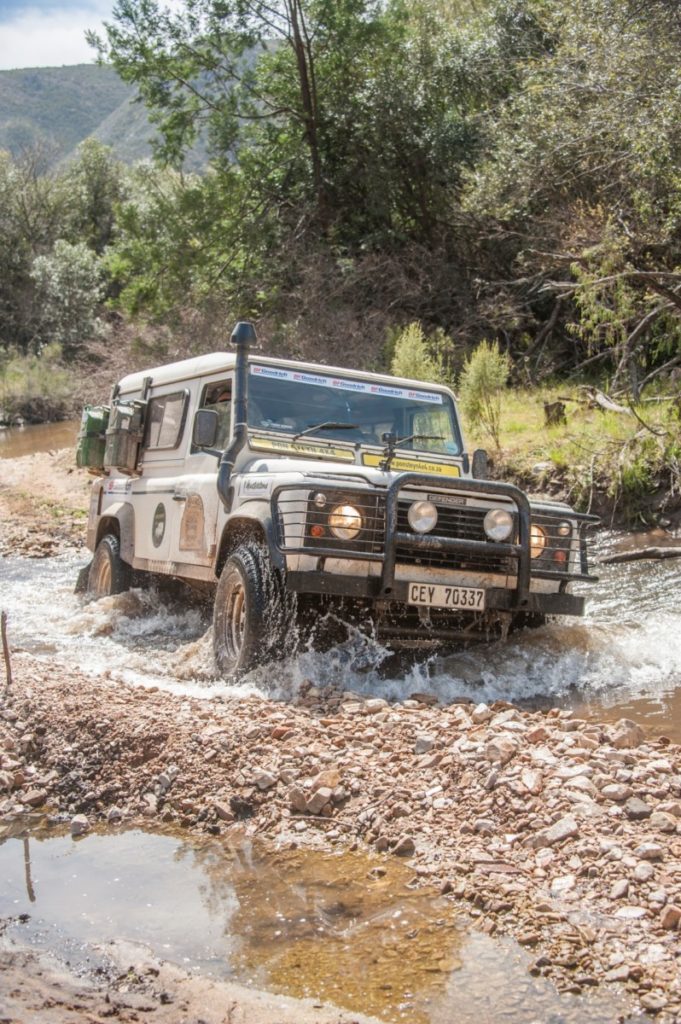 Richard and I shared a lovely old, two-door Defender 110 TDI. It has a solid wood panel installed in the back, which turned out to be the ideal bed for Rich. We used the space under the panel for storage, fishing the wanted things out with any stick we could find. The jerry tanks looked mean, but Johan’s planning meant that they were never required. Most important was that the Landy went like the wind, tearing up tar and gravel alike. Diff-lock was needed only once, and it did its job admirably. Defenders are tough old things to love, but once the bug has bitten, it’s an itch you never get rid of.

A big thanks to Pon Steyn Motors for lending us the vehicle. If you’re ever in Somerset West, pop in at the workshop and gape in awe at their collection of Land Rovers, Unimogs and military vehicles. Their service is also the best around, so give them a call if when your old chugger needs some repairs. Call 021 858 1740, or visit www.ponsteyn.co.za.

For the full adventure, be sure to grab a copy of the December issue of SA4x4 Magazine, on shelves now!