Ken and I needed to get back to the Kalahari – just one more time for him. Ken measures his time in months before he literally shuffles off this mortal coil. He has 18% lung capacity and needs to be hooked up to oxygen day and night. A walk of ten steps without being connected is the equivalent of a marathon for him.

Despite everything that weighed against him, he agreed to join. His friend Corlé would tag along to be his arms and legs; a hewer of wood and a carrier of water; a pitcher of tents and loader of vehicles… what could go wrong?

All I had to do was get the old Pajero fitted with a roof-rack that would hold the two 80kg oxygen bottles. This would be my inheritance from Ken (the rack, not the oxygen).

Afterwards, I’d fetch Ken and Corlé in Pietersburg. Oh, and one more thing – Marieke, a mysterious volunteer lady from Amsterdam, would be joining us. Oh well, Corlé would just have to look after her as well…

“Ken probably thinks I’m a moegoe,” Corlé muttered, giving us his reasons for not being able to join as we loaded the Pajero.

“You are a moegoe! How am I supposed to do all the work on the trip with an invalid and a woman who’s never been to the bush before?”

Before you vehemently agree with me, allow me to clear up some of the misconceptions that you might be sharing with me at this stage: Ken may be chairbound and leashed to a giant gas bottle ninety percent of the time, but he was also the one who heard – on the first hundred metres of the trip – that there was something wrong with the newly-fitted shocks and could tell us exactly how to fix it.

He could also establish (albeit from the manual) how to make the best use of a Pajero’s mysterious 4×4 capabilities, and could crawl up a 100-metre dune on sheer determination and no breath. 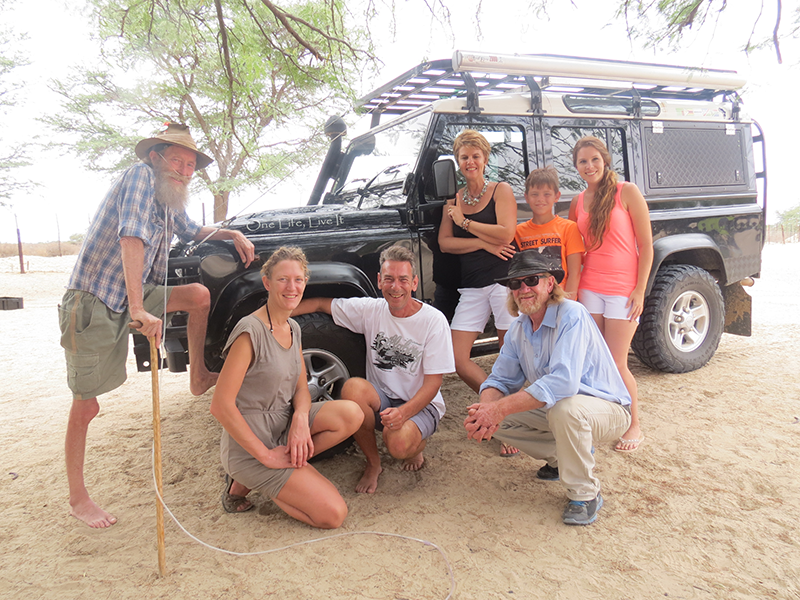