When the full moon is out in that triangle at the northern tip of Limpopo, just where the borders of South Africa, Botswana and Zimbabwe meet, it seems a signal is sent to all the skelm cigarette smugglers and rhino poachers in the region. Taking advantage of the extra light, they step up plans to cross borders, cut fences and carry out shameless animal massacres.

It’s easy to understand why. This is a region of massive game reserves and stretches of no-man’s land which adjoin the Mapungubwe National Park. It’s a sparsely populated landscape of wide river valleys and rocky outcrops, dotted with those magnificent upside-down trees, the baobab. But after years of incursions and severe animal losses, the owners of Mapesu Private Game Reserve are striking back.

This is why, on a recent Monday morning just prior to the full moon, a group of bush-mad 4×4 enthusiasts from SA4x4, Opposite Lock and Front Runner have made the six-hour drive from Gauteng to accompany the reserve’s Anti-Poaching Unit (APU) on their moonlit patrol. Ryno Cloete from Front Runner is driving a 130 Defender festooned with all sorts of camping gear, Pieter Swart from Opposite Lock has arrived in a dark grey Hilux bristling with body armour, a canopy and spotlights, while I have brought my usual fire-engine red Legend 45. I am accompanied by Dimitri Fogg of Beastly Adventures, who has agreed to drive and to cook while I take photographs. Little persuasion needed.

In previous discussions with Mapesu MD Johan Pfahl (who is also in charge of the four-star Mopane Bush Lodge within the reserve), he had indicated that he would like what he is calling the Poacher’s Moon Patrol to become a monthly event. The aim would be to have guests spend three to four nights enjoying the rich offerings of this 7 200 hectare reserve, with one of the nights dedicated to patrolling fences with the APU – up close to the fight against rhino poaching. 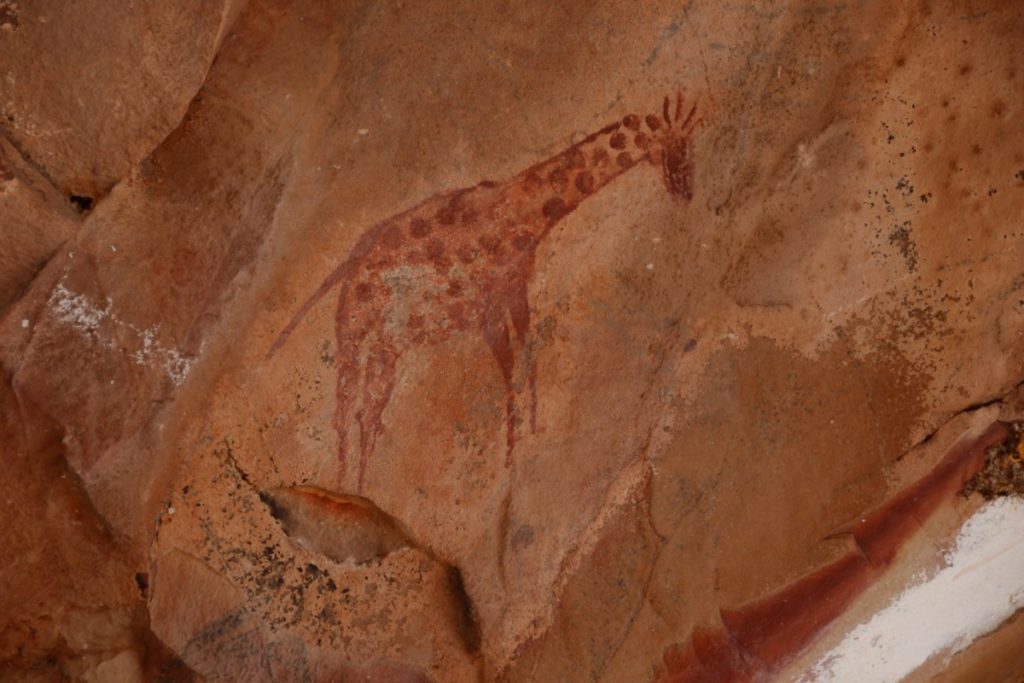 We are the first group to enjoy this privilege. But right now, while the sun is up, we’ve bundled into a Mapesu game-viewer and headed for the Greater Mapungubwe Transfrontier Conservation Area to look at the san paintings near Kaoxa Bush Camp, a national heritage site. There are hundreds of paintings dating back to between 10 000 and 12 000 BC, including depictions of locust and elephant, yet they look as clear as the day they were daubed onto the rocks. 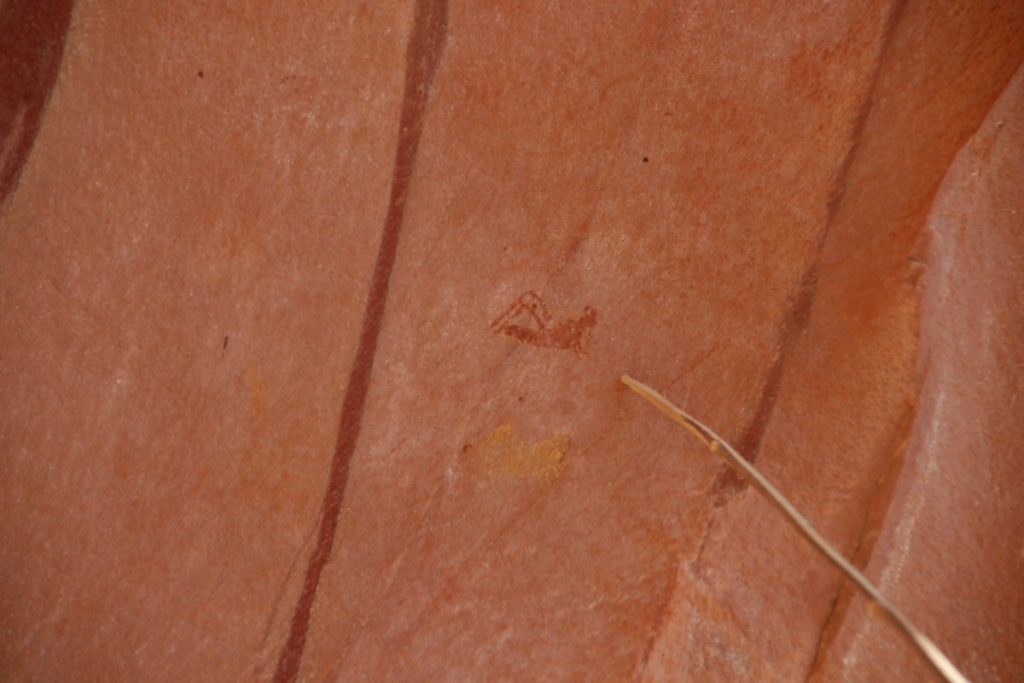 From Koaxa we drove back to Mapesu to book in to the wilderness camp where we had been luxuriously put up, in spacious canvas tents equipped with air-conditioning and a warm shower for the evening. The reserve also has 24 campsites for self-drive guests.

Sitting around the fire that night, with Dimitri hard at work on braai duties, Johan filled us in on the plans he had for our time at Mapesu. Little did we know how he would over-deliver.

Dawn was just breaking on the Tuesday when we hauled ourselves out of our tents and headed for a quick coffee and rusks at a point overlooking one of the many drinking holes. We watched the sun rise not far from a site on Mapesu that has its own San paintings and made our way there to have a look. The rock art is as clear as the examples at Koaxa and includes some beautiful images of elephants. 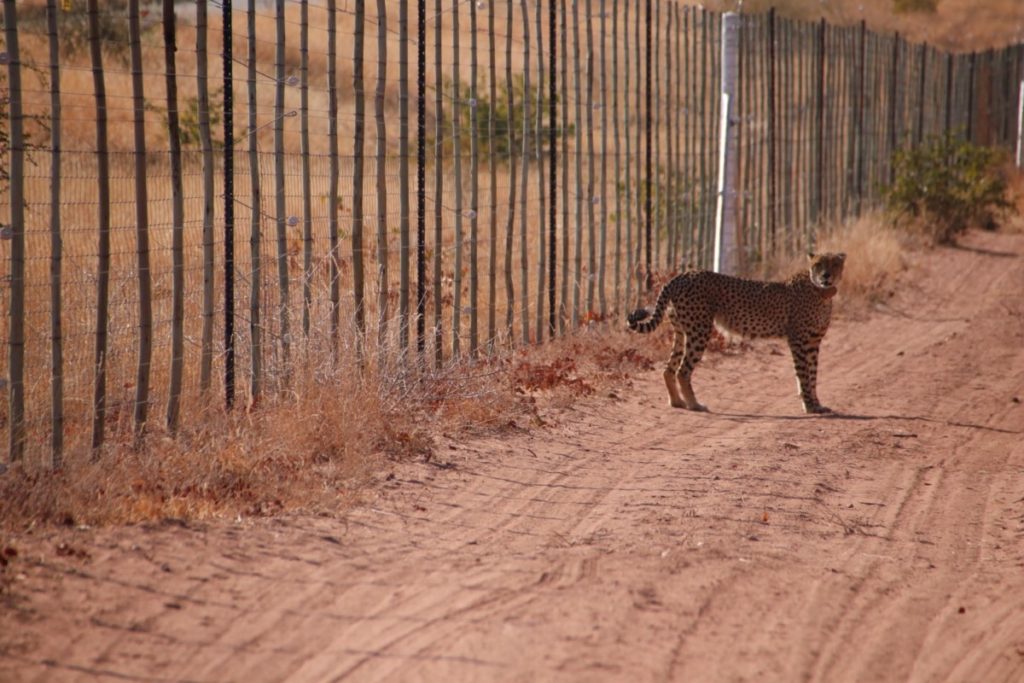 On our way back to the vehicle a call came in over the radio that one of the rangers had spotted a cheetah on the move. We quickly headed for the site and found the cheetah lazily walking in the road and every now and then slumping down for some R&R. 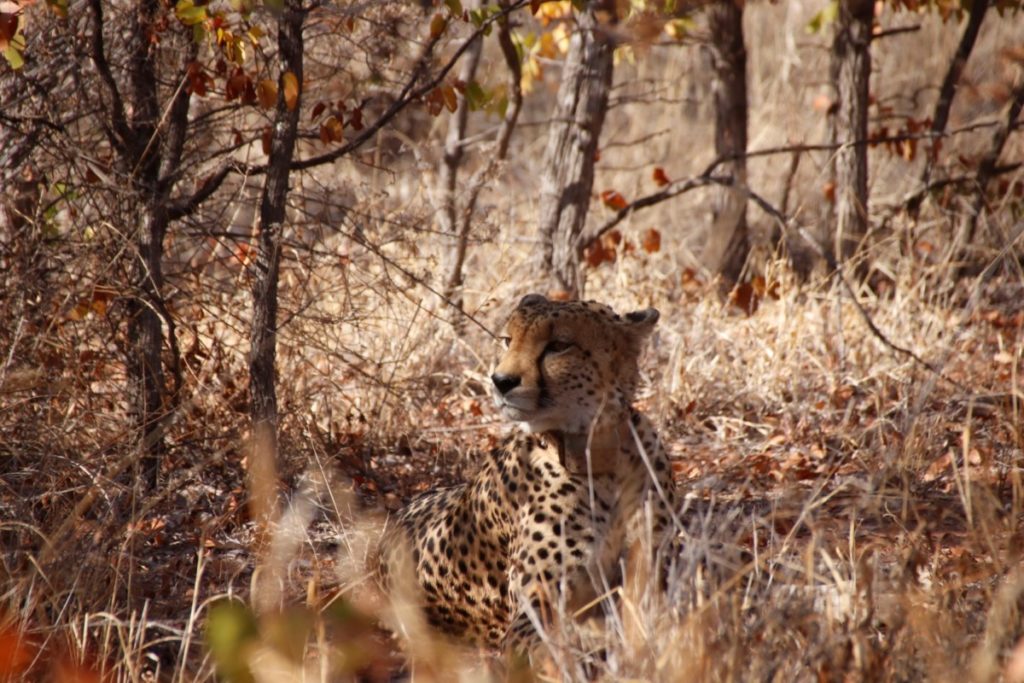 We spent as much time as we could until another call over the radio announced it was feeding time. I was puzzled until our ranger explained Mapesu had acquired five wild dogs the week before. They were being held in a boma to enable them to acclimatise to the smells and sounds of Mapesu. Sadly, one of the females had been killed two nights before, apparently after an encounter As we parked up outside the boma, one of the reserve vehicles arrived with an impala carcass. Just like my Bull Terrier and Labrador at home get excited at feeding time, the wild dogs yelped and jumped about, though they were extremely careful around Axel – who brought them their meal. I was astonished by the brute force of the dogs; in a matter of minutes the impala was ripped to pieces. 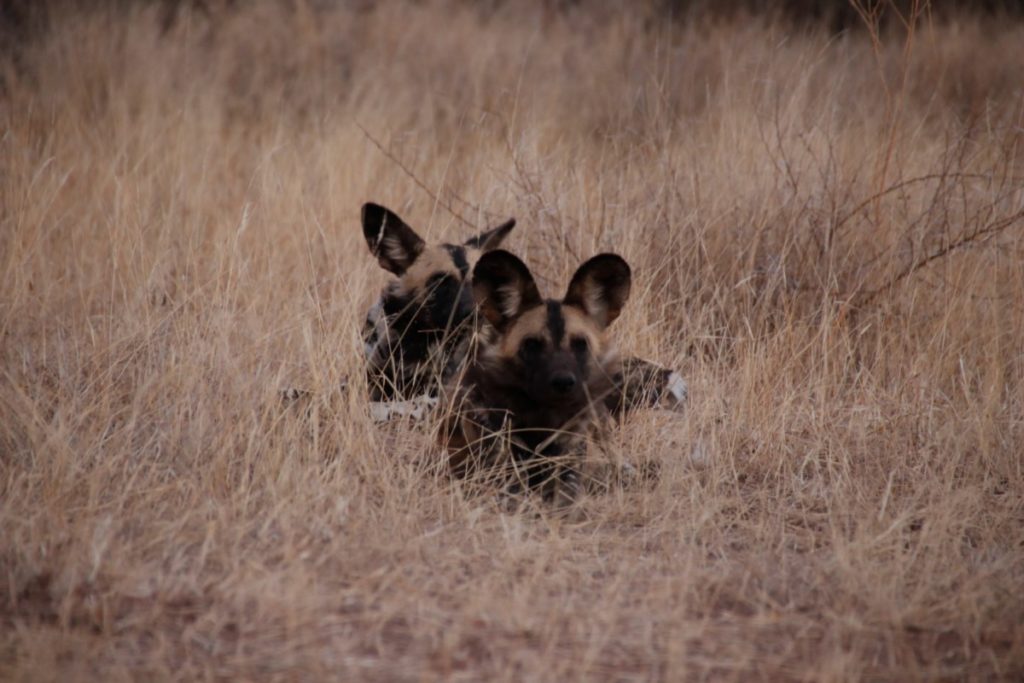 The area’s tremendous biodiversity is thanks largely to its varied habitat. Mapesu is situated within the mopane veld dominated by Colophospermum mopane (commonly called the mopane tree, butterfly tree or turpentine tree) on the Archaean Beit Bridge complex.

The reserve consists of undulating plains with a number of drainage lines and some hills (Limpopo Ridge Bushveld) in the East and South. There are plenty of waterholes (artificial, some solar-powered), including one natural dam/wallowing hole, creating wallowing spaces for rhino, buffalo, and elephant. The river from which the reserve gets its name, the Mapedu, runs through the property on a seasonal basis.

There are more than 49 species on the reserve. Elephant were introduced in 2016, cheetah in 2017, sable giraffe and buffalo in 2018, and this year, wild dog and rhino. Mapesu has aligned with the Endangered Wildlife Trust’s Cheetah Metapopulation Project, and offers a volunteer programme to help share conservation initiatives.

Reserve activities include: game drives, visits to nearby reserves (including the Mapungubwe National Park), and now the once-a-month planned Poacher’s Moon Patrol. 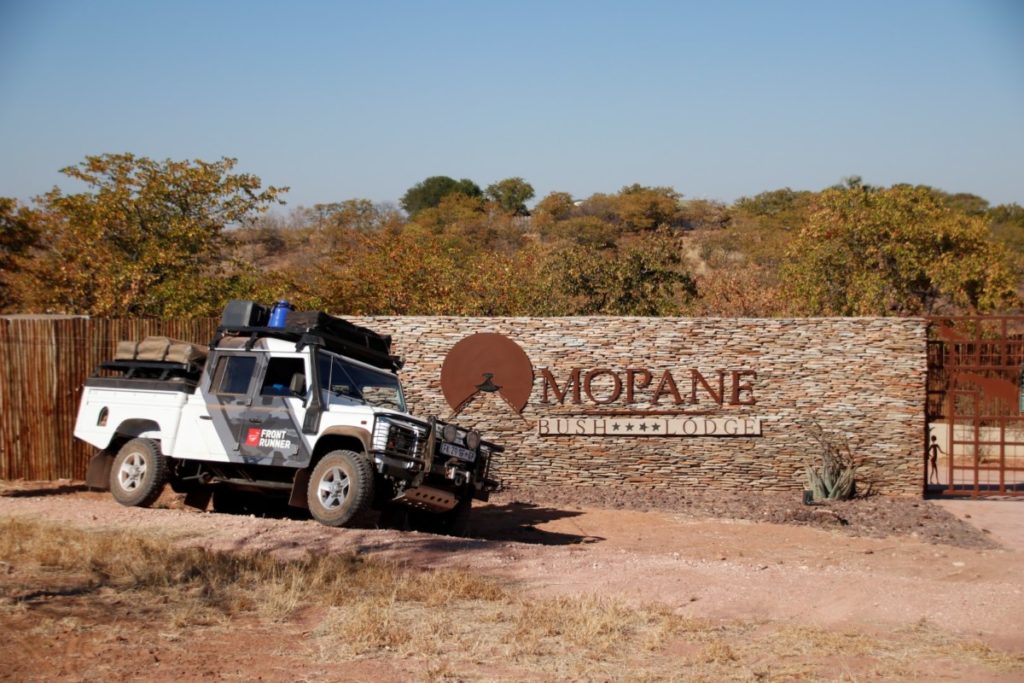 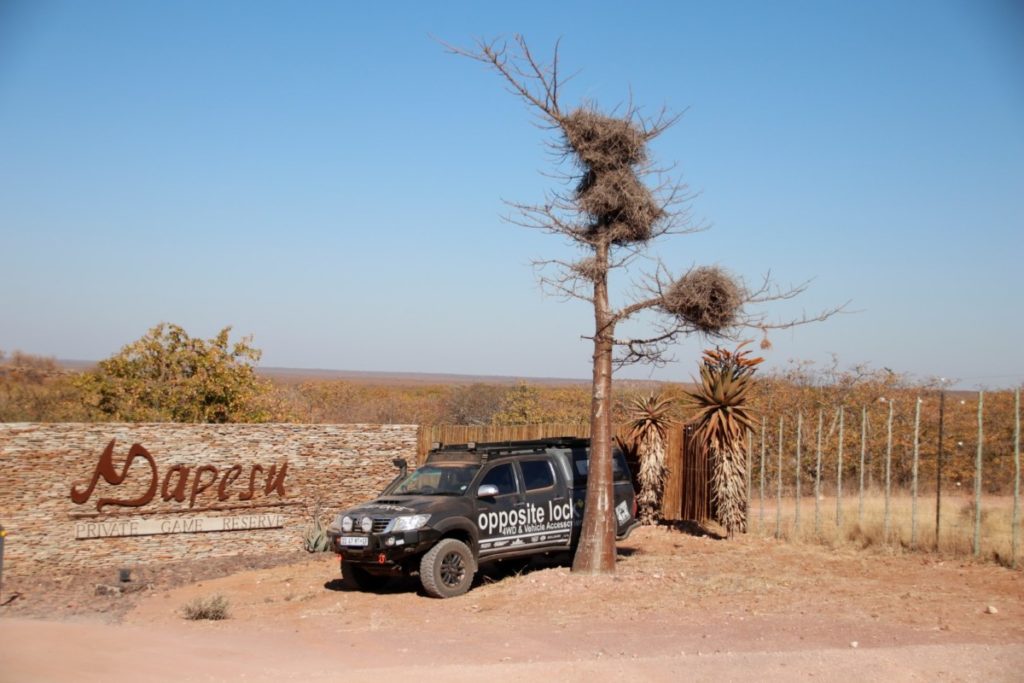 Apart from a host of third-party body armour, including a bull bar, rear protection bumper, canopy and all-terrain tyres, Pieter’s vehicle was fitted with a few dedicated Opposite Lock goodies…

For the full story, grab yourself a copy of the October issue of SA4x4 Magazine. 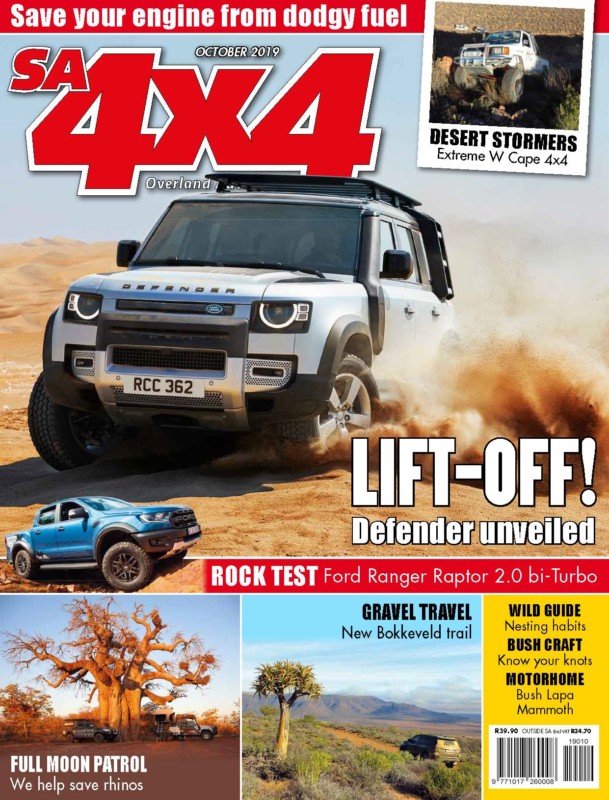