Researchers in the quest for life on other planets are no stranger to the Namib. The logic is that if it can survive here, it can survive on Mars, too. A world of bonedry river beds, fields of quartz crystal and sparkling mica dunes may sound Martian, but it’s right on our doorstep.

As I stand looking around in the middle of Namibia’s convection oven, the hot wind dries my skin and blasts the parched earth like a giant hairdryer. Get stuck under this blue sky, and you won’t last much more than a day. Charred 4×4 carcasses, beaten by the deep sand and heat, provide a stark reminder of where we are.

Luckily, we are here with Uri Adventures, about to put the new Land Cruiser 200 Series through its paces on the ‘Faces of the Namib’ tour. This five-day adventure sets out to demonstrate not only the brutality of the Namib, but its magnificence, too.

The tour, which starts in Solitaire and then slowly zigzags north east before ending in Walvis Bay, consists of four major terrains. These are river beds, rocks, dunes, and (at the end) almost 100km of beach driving. We’ve just refuelled at Solitaire’s pumps, and our convoy is itching to get going as we munch on sweet apple pie. This tiny pit stop is frequented by overseas and local tourists, who then fan, out on their respective self-drive journeys – but, luckily, they can’t follow our tracks.

Tyres must be deflated when we leave the C14 gravel highway and cross into the home turf of our guide, Danie van Ellewee − better known as ‘Jakkals’. The Namib Naukluft National park is for guides and their convoys only, and this is what makes it so special – you can’t just pull in with
your rented 4×4. Despite being one of the largest national parks in all of Africa, it’s a place few tourists or locals venture into. 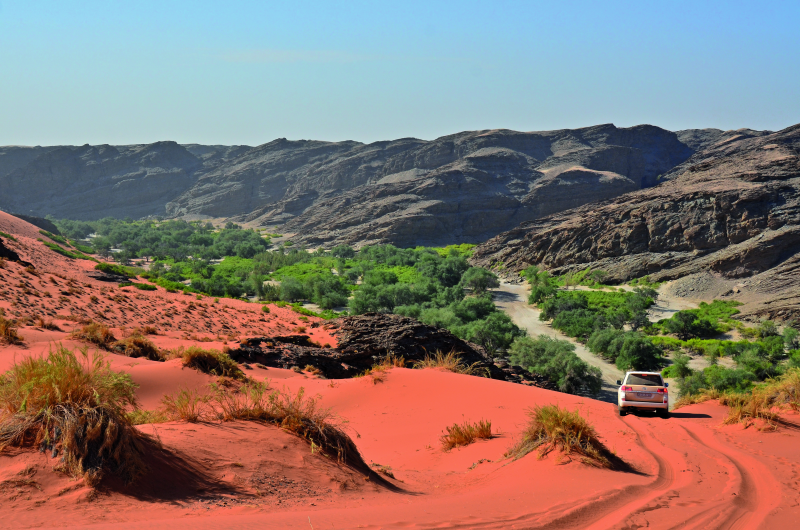