I last graced wonderful Namibia during my military service in the early 80s and that stay was confined to the northern towns of Oshakati and Ondangwa. Besides firing numerous 12.7mm Browning anti-aircraft rounds at no-one in particular, from the vantage point of the water tower I was confined to, there was little opportunity to take in the varied landscape that is the beating heart of this incredible country. So, when the offer came in from Marko Paape, manager of AFC (Accessory Fitment Centre) and supplier of Ironman 4×4 products for the Namibian dealer network, to join a 4×4 trip in the Erongo region, I jumped at the chance.

After a quick flight from Cape Town to Windhoek, I spent the night at the luxurious Arebbusch Travel Lodge before setting off the following morning on what would turn out to be an adventure filled with lots of laughs, some amazing sights and beautifully-arid surrounds – a photojournalist’s dream. 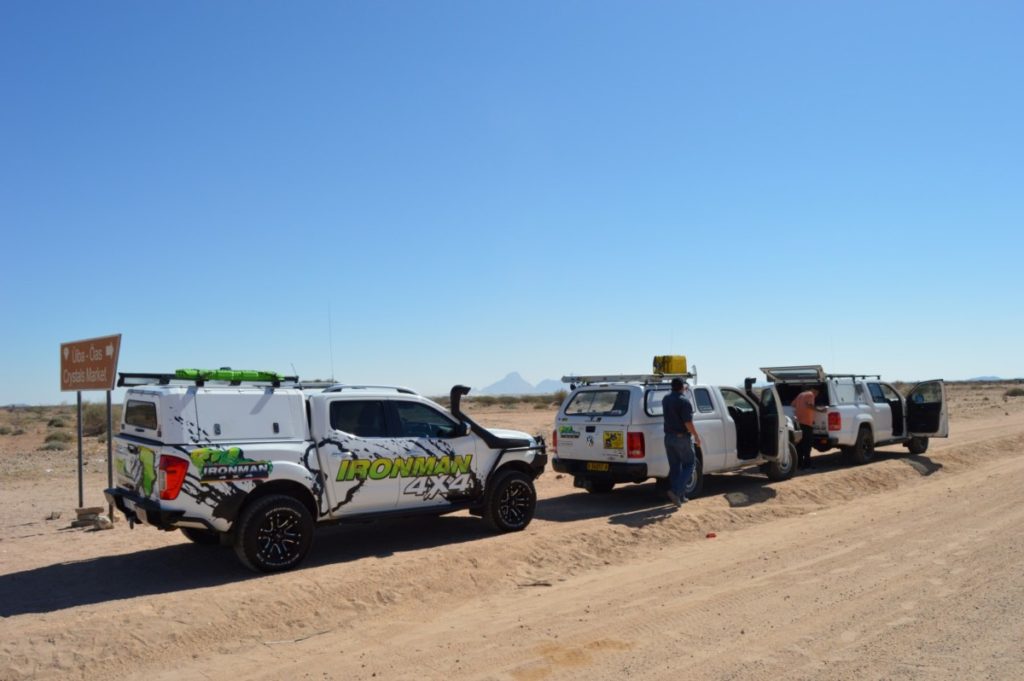 The day kicked off with a quick introduction from event organiser Marko Paape and a briefing from trip guide Johan ‘Muis’ von Wielligh, before all the participants and dealers piled into their vehicles. I would be driving with Deon Anderson of Ironman 4×4 South Africa, in the comfort of his fully kitted Nissan Navara 2.3-litre double cab. With aircons turned up, we all headed to the natural wonder of the Spitzkoppe for our first overnight stay. 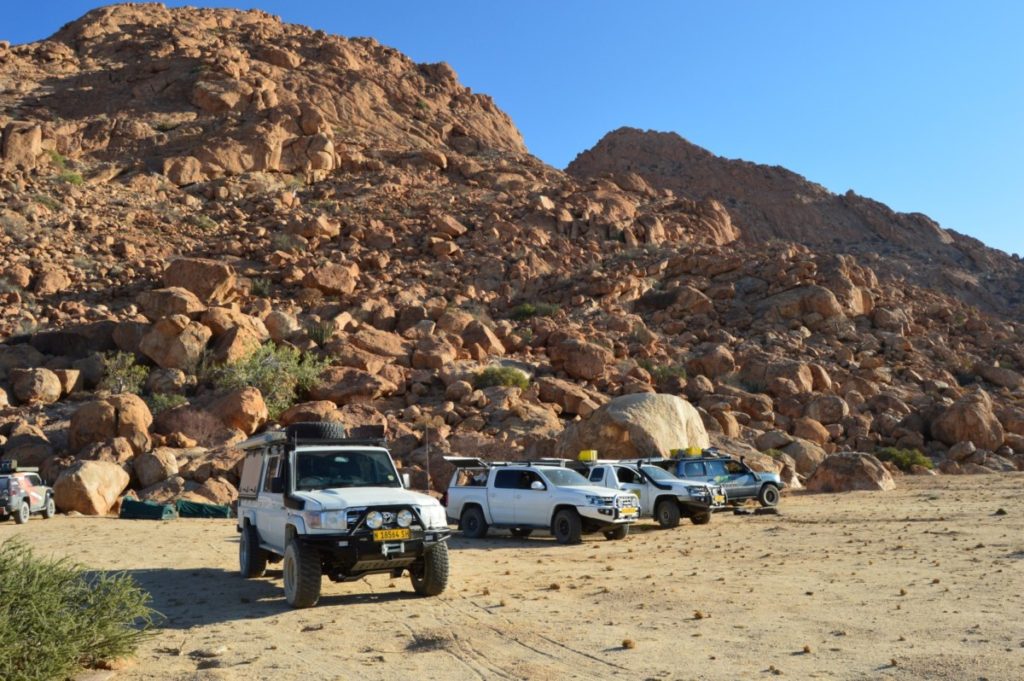 It’s approximately 280km from Windhoek to Spitzkoppe, most of which is spent on tarred B2 roadway which passes through Wilhelmstal, Karibib and Usakos before the dust road turnoff at the Uiba-Oas Crystal Markets. Once here, it is a short 40km drive to Spitzkoppe, which is known as the Matterhorn of Africa. Its majestic form rises 1 784 metres above the flat surrounding plains. No permits are required to drive to Spitzkoppe and the Omaruru riverbed but care should be taken to protect the environment when there. It is always suggested to drive in convoy, or at the very least with two vehicles, so that assistance is at hand in the case of a rollover or getting heavily stuck in the thick sand. 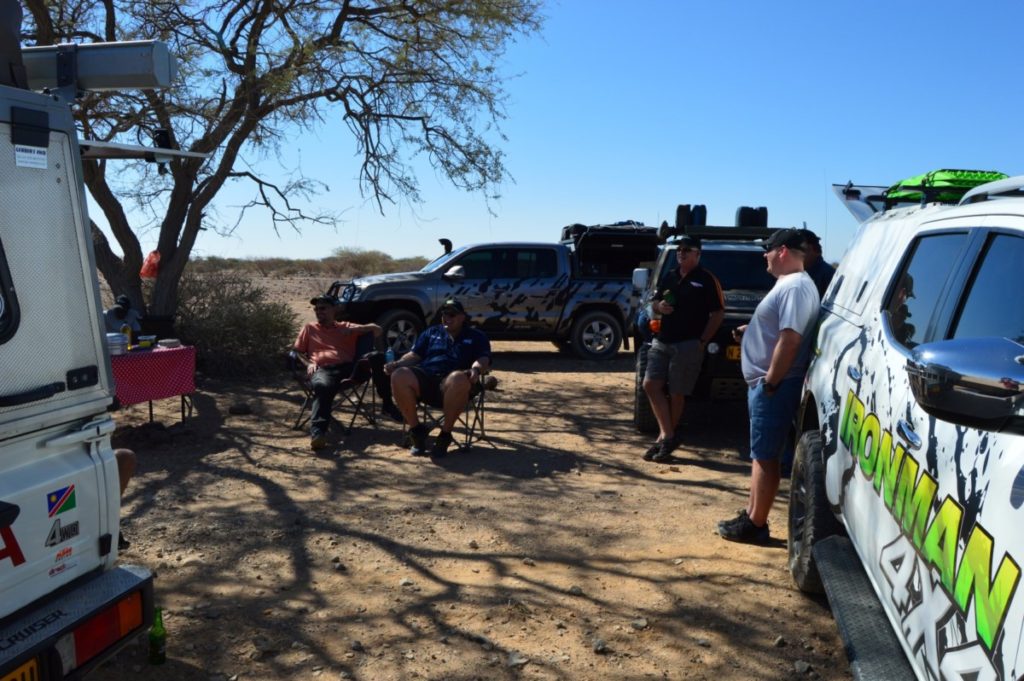 If you ever want to purchase quartz crystals, Desert Rose clusters, pink quartz and other naturally-faceted gems, then Namibia is the place to find them. I purchased a variety of crystals along the way to Spizkoppe from roadside vendors, who were much more reasonably priced than the Uiba-Oas Crystal Markets selling the same thing. The dust road to Spizkoppe is an easy drive and on arrival at the designated camp area next to a large koppie, we set up camp and took in the beautiful panorama that surrounded us. It is barren and arid country, yet it breathes with a beauty of own, full of life. If you look a little deeper by lifting up the corner of the fine dust carpet, there are bird species, dassies, aardvark, lion, rhino, buffalo, reptiles, antelope, some incredible plant life and mineralization that is other-worldly. The ground shimmers and glitters as the sunlight catches the fine facets of the gems that lie in abundance on the surface, wherever you go in Namibia. 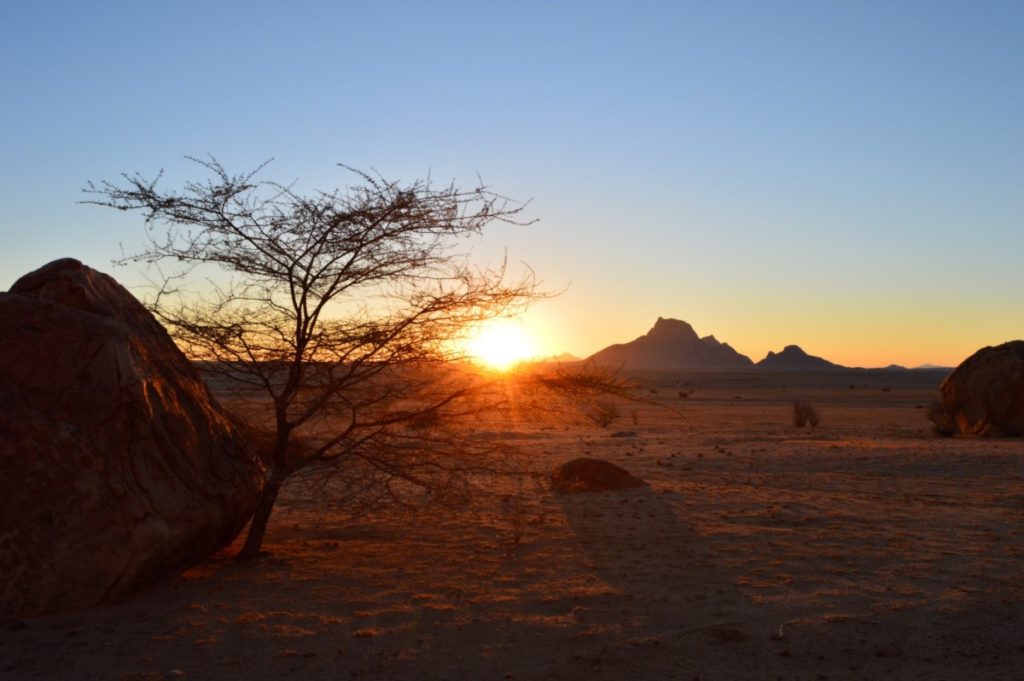 With our camp set up in Spitzkoppe, it was time to gather for a chat around the fire as ‘Muis’ went about taking out the large steaks that would form the tender foundation of a great outdoor dinner. As the sun set, the Milky Way and thousands of other stars blinked to life in the heavens above, accompanied by the crackle of the braai fire and the laughter that emanated from those relaxing in their comfy camping chairs. Johan ‘Muis’ our guide stood up during the evening to come clean that he had left the evening’s pudding on top of the fridge at home. A word of advice for other tour guides: never – ever – let on that you’ve left the pudding behind as you will never live it down, not for the entire trip. In his defence, Johan did remember to bring the custard that was going to smother the forgotten pudding. 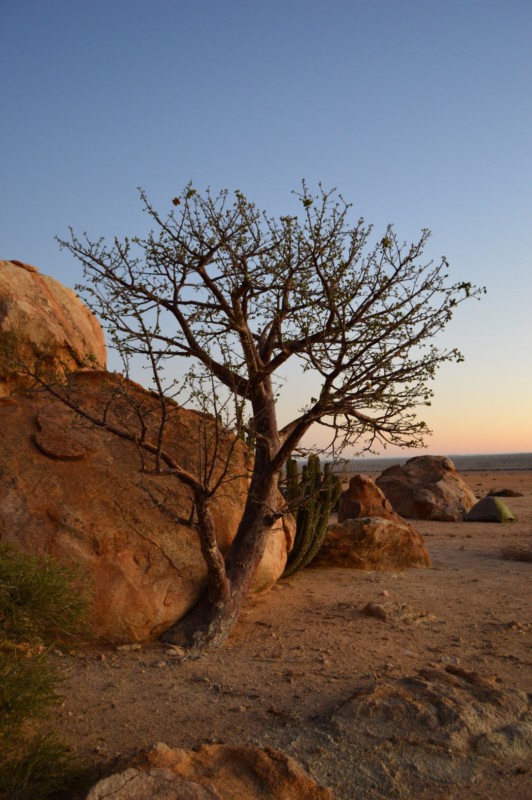 After a great dinner of steak with pepper sauce, fresh salad and potatoes smothered in butter, the stories and laughter continued under the blanket of stars. Expedition participant Stephan Ham from 4×4 And More online store then stood up and asked each of us the question: “Who are you and why are you here?” We all responded individually by telling our particular life stories and what had led up to us being part of this adventure through the wonderful Namibian wilderness.

I was up before sunrise to get my cameras out, and noticed the camp had remained free of animals in search of tidbits during the night (no tracks were evident), perhaps due to the high-decibel snoring emanating from quite a few of the tents. 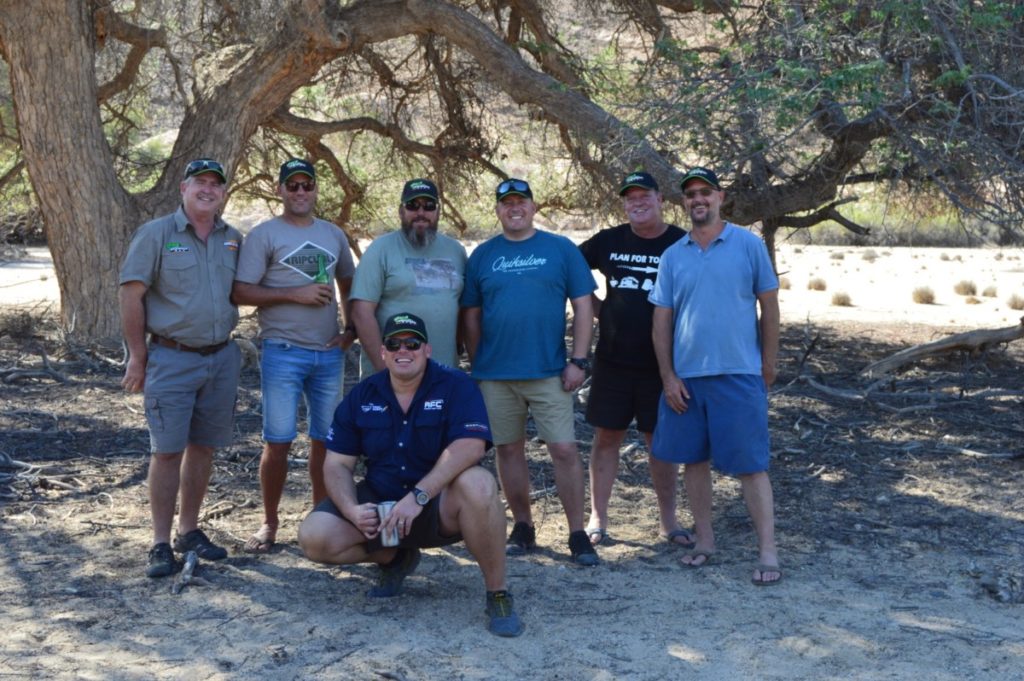 In the morning we wolfed down a quick breakfast and then it was off in a south westerly direction to where the 4×4 trail enters the Omaruru River at Lêwater for our next stop. The distance from our campsite at Spitzkoppe to the Omaruru River campsite at Skoenklip is about 80km, all of which is on dust roads and soft, thick sand when reaching the riverbed. During the drive, we passed an old granite quarry along the way, which still had huge granite blocks standing resolute and abandoned, cut from the mountainside. 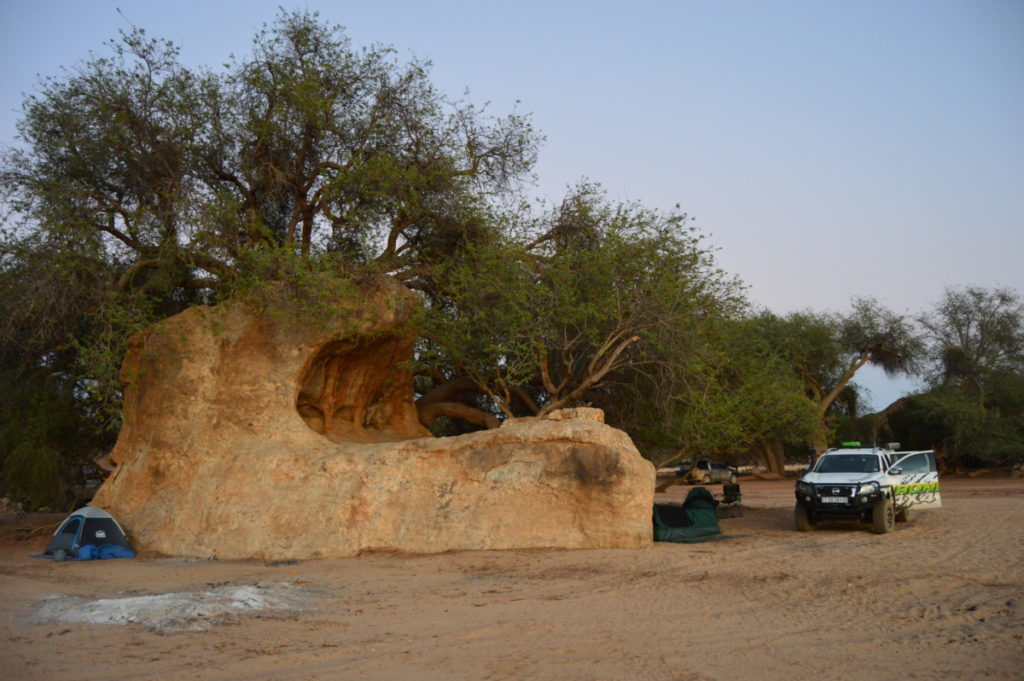 Before reaching the informal riverbed camp (set next to a huge shoe-shaped rock called Skoenklip in the middle of the dry river), we meandered up the dry Spitzkoppe riverbed, which leads into the Omaruru River for some sightseeing of the amazing geological rock formations, flora and fauna. The area also has numerous rock paintings. Here we also spotted the amazing Elephant’s Foot plant (Adenia pechuelii) which is native to Namibia.

Often during the trip, our guide ‘Muis’ would come on the radio and inform us about the sensitive area we were driving in, and ask us to follow in the tracks of the car in front to cause the least possible damage to the environment. It’s quite possible to minimise your impact on the environment. And, with regard to waste, you take out what you bring in, it’s that simple. Leave nothing behind. In fact, go the extra mile and pick up bits of waste that were left behind by others. 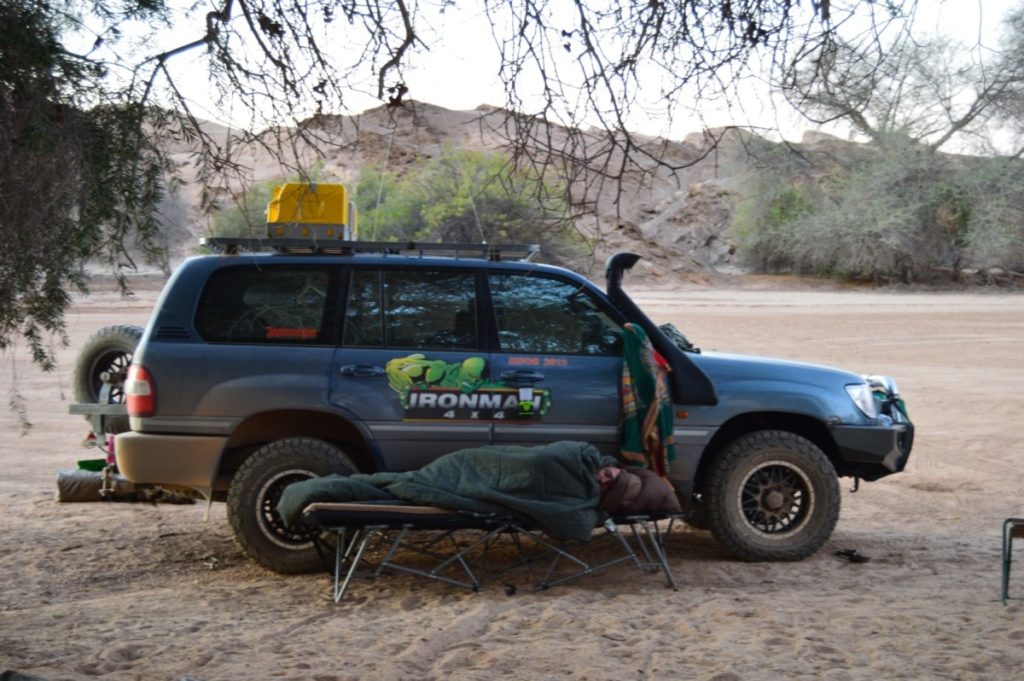 After setting up our campsite in the Omaruru River, it was time for a welcome shower in the collapsible shower cubicle set up next to Theuns’ vehicle. After a delicious braai and chats around the bonfire that followed, it was off to sleep under the stars. In the morning the fire was stoked and strong coffee sweetened with condensed milk, and rusks, made a welcome appearance. We then enjoyed a quick breakfast, packed up the camp before the heat of the day settled in, and began the scenic trip to our final destination. 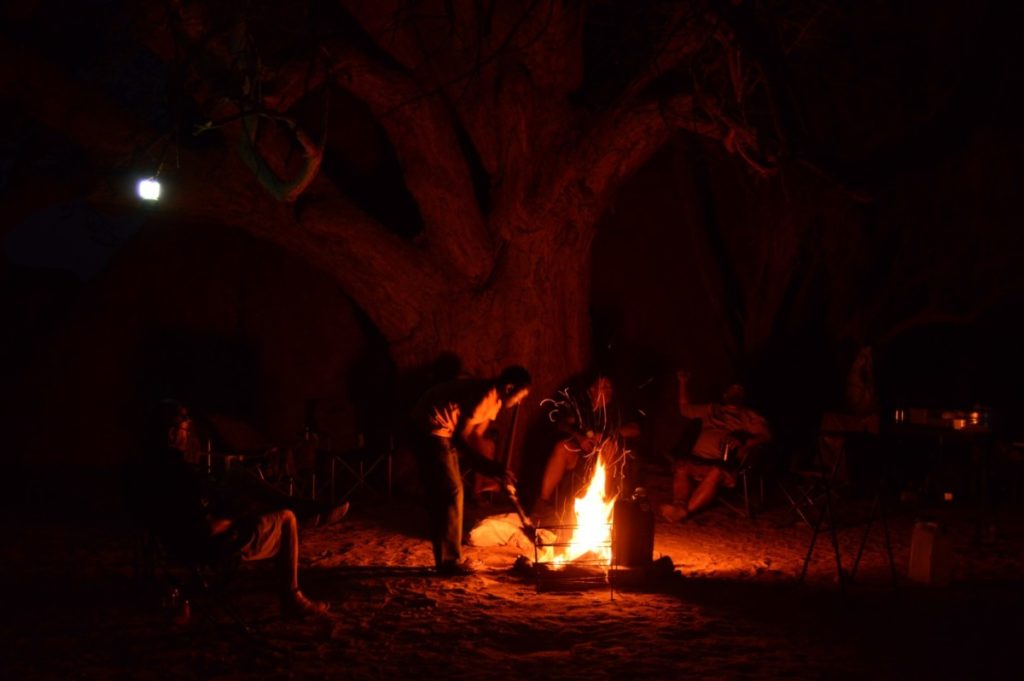 Although Namibia is in the stranglehold of a severe drought (the Omaruru River last flowed in 2011), be aware that heavy downpours inland can cause the river to flood unexpectedly. Favourable 4×4 travel to this area is after the rainy season, which ends in May. The large pieces of driftwood scattered about are evidence of the power of the water when it flows.

With an early start, we journeyed along the thick sand common to the Omaruru riverbed for about 100km till we reached the Omdel Dam where ephemeral floodwaters are stored. The riverbed, though dry for many years, is still populated with large trees which survive due to their deep root systems having the ability to derive the necessary underground moisture to survive. We stopped on top of the Omdel Dam wall for some sightseeing and photographs. When there is water in the dam, it is released during dry seasons into infiltration areas over natural underground fresh water reservoirs. There has not been water in the Omdel Dam for many years due to the severe drought. 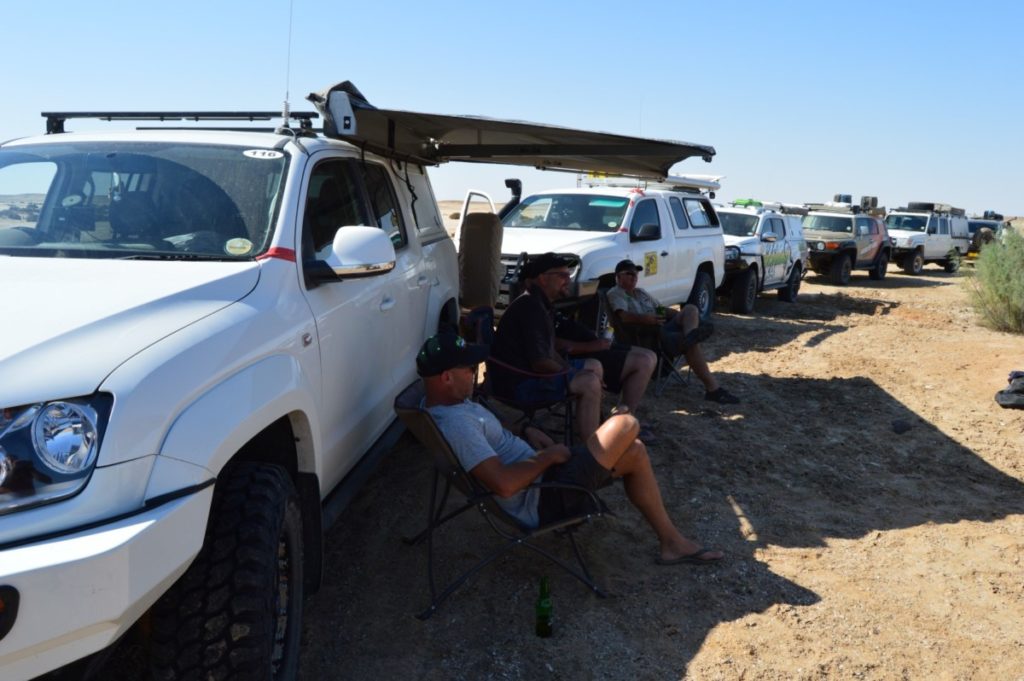 The look back along the parched riverbed drums home just how dry this area has been, last getting rain of any significance in 2011. I also heard on the radio that, this year, Namibia is experiencing the worst rainfall in the last 100 years.

For the rest of the adventure, get your hands on a copy of the August edition of SA4x4 Magazine.