I was sitting around a fire with my Dad one Sunday in March, when our general discussion moved to Botswana, a country that has crept into my heart over the last couple of years.

We were talking about the Zebra migration every September and October, when the game starts massing in its thousands in the Nxai and Makgadikgadi pans, and then, as if by some group signal, heads to Xhumaga (also known as Khumaga) on the banks of the Boteti River in search of greener grass.

We decided this was the year that we should take a trip to see if we could catch the migration, and, as the conversation developed, we added a challenge: how awesome would it be to traverse the pans east to west?

The answer was easy, so I started planning our trip and researching the roads and accommodation options. I also spoke to a couple of mates who know the area, and could offer advice on the best route to take.

Not long after, sitting one morning talking with Mic van Zyl of Ironman 4×4, I mentioned the trip that I was planning and subsequently invited him and his family along. Our final trip was planned to be over seven nights, starting on the last Saturday in September, with the driving component spread over four destinations – and including three nights at the SKL Group’s Khumaga Camp, before the long haul home.

After some of the typical family-trip hiccups involving punctured tyres (on the caravan) and sorting out missing border-clearance papers for one of my nephews, we finally left South Africa through Stockpoort border gate and headed north to Khama Rhino Sanctuary for our first night. We arrived late in the afternoon and started to pitch camp. By 16:00, we were all set, but when a suggestion was made that we take a game drive in search of rhinos, it seemed too much. Instead, we lit a fire and had a cold one. Just after sunset, the wind picked up and started surging through the campsite. We had three ground tents, two roof-top tents and a caravan in our convoy, and those tents were noisy with the wind shaking them around. We had little sleep.

Despite that, we were up at 07:00 the next morning, making coffee using the two RSI SmartCanopy kitchens fitted on the Hilux and the Ranger, before we packed up and headed to Letlhakane to buy some last-minute provisions and to fill up our vehicles. We headed East on the A30 towards Francistown, and just after the veterinary fence, we turned north on the cut line. It was wonderful to drive through the thickets of mopane trees in this savanna environment, and we saw signs of elephant everywhere. We kept our northern course towards Kukonje Island, using the excellent Tracks4Africa mapset on our GPS. If it hadn’t been for their detailed research, we probably wouldn’t have found the correct road.


The kids had a ball on the wide-open spaces: this was pure freedom for all. When the skies turned orange, we lit our fires and settled in with a G&T.

It is difficult to describe the pans. Words like ‘breathtaking’, ‘amazing’ and ‘mesmerising’ come to mind, but, in truth, the only way to appreciate their sheer vastness is to travel there yourself.

Our initial plan was to circumnavigate the pans, and reach Khubu Island. Unfortunately, the surface was becoming pretty soft at the time of our visit, and even though we were a convoy of four capable vehicles, we just did not want to risk it. So, like a bunch of ancient explorers, we stopped in the middle of the pans, spread a large map over the bonnet of the Ranger and planned the best route to our next destination.

Our chosen road skirted the southern rim of Sua Pan, and through Cobas forest. (This is a cluster of the rather bizarre Sesame-bush specimens which look like craggy dwarf Baobabs, but are identified by their spiny branches.) We crossed the edge of Sau Pan a couple of times, and spotted some black-backed jackal.

All was going according to the new plan until the welds on the towbar of the long-wheelbase Pajero broke, a victim of the heavy corrugations and a heavily-loaded Jurgens Explorer off-road caravan. My father had previously modified the front of the Explorer to carry a drawer system in place of a double bed; but, try as he might, he could not balance the extra weight on the hitch by filling the rear water tanks. The experts had assured him that this would not be a problem, but Botswana’s roads had the last word there.

After some debate, it was decided that Mic would hitch up my small luggage trailer to his Black Ops Ranger and head straight for Makgadikgadi Adventure Camp, our next overnight stop, and I would take the big caravan. Unfortunately, it was now lying flat on the frame, making it impossible to lift its nose off the hitch and get it hooked onto my bakkie. Luckily, it wasn’t long before a friendly local came past with a high-lift jack, and we were able to sort out the transfer.

Towing a huge off-road caravan was a first for me. I tend to keep all my kit inside my bakkie, or on top of it; and when the whole family is on board, I find my little Venter trailer provides ample space for the overflow. But this caravan got me, twice. First, I forgot to inflate my tyres a bit to carry the extra weight, and it wasn’t 20km before I felt something go. I must have hit a sharp stone, or the heat build-up was too much, but within seconds my right rear tyre delaminated and was completely destroyed, and its alloy rim severely damaged. We struggled to get the axle high enough to fit the spare, but after about twenty minutes, we were on our way to Makgadikgadi Adventure Camp and the promise of a cool dip in their pool. 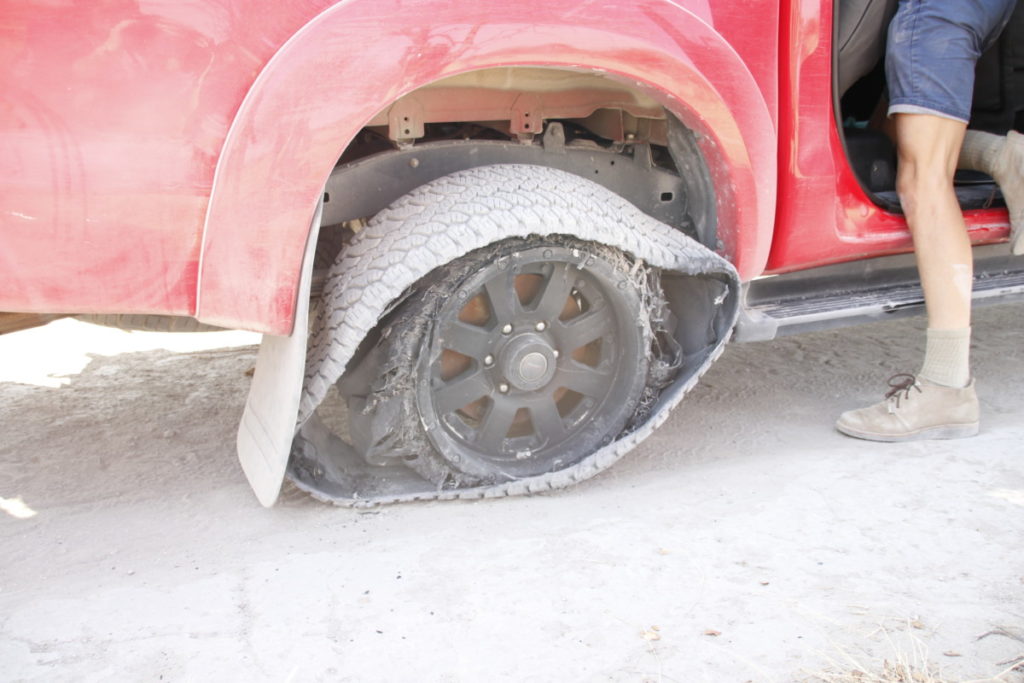 But the day wasn’t done with us yet. The generator at the camp had broken a few days before, and the pool was closed. Luckily, it was Mic and Elma’s turn to cook that evening, and they helped smooth out the rough edges of a hard day with a feast of lamb chops, roasted veggies and a salad.

The Sanctuary’s roads are well-maintained to make them suitable for self-drive game viewing in two- and four-wheel-drive bakkies. Buy a copy of the map at the entrance gate and follow the signs to find your way around. There is a restaurant with a pool and many campsites and chalets available.

Overnight costs: Camping P108 per night per adult, P54 for children under 12

Kukonje Island is a small island on the eastern shore of Sua Pan, roughly opposite Kubu Island, with similar fossil beaches and ancient remains. (GPS: KUKOME). Phone the Parks and Reserves Reservation office to check water levels before travelling during the wet season. Rudimentary camping facilities only.

Makgadikgadi Adventure Camp is a self-drive, self-catering facility only. It currently provides basic/essential camping facilities. They have a small bar and a swimming pool – if the generator works. There are ablutions with warm showers. Tented accommodation is also available. Pricing is from P80 per person per night for camping, to P150 for the tented accommodation.

The Makgadikgadi Pans Game Reserve, a salt pan with an area of 3 900 sq. km, is situated in the middle of the dry savanna of north-eastern Botswana. It is one of the largest salt flats in the world. The pan is all that remains of the enormous river-fed Lake Makgadikgadi. The pans are littered with stone tools and artefacts which have been dated as being between 2 000 and 500 000 years old. During the wet season, between 35 000 and 75 000 zebra and wildebeest migrate to the area, making it Africa’s third largest mammal migration. Entrance fees are P120 per person per day, and P50 per vehicle.

Khumaga is well known for the great migrations of zebras and wildebeest. It is bordered by the seasonally-flooding Boteti River, which is also on the flamingo migration route. There are nine campsites and two ablution blocks with hot showers. It is situated about 3km from Khumaga Gate. The gate is accessible from the town Khumaga via a ferry over the Boteti River – at a cost of P150 per vehicle and an extra P50 per caravan or trailer. Khumaga camp fees are R250 per adult per night, and children (5-7) R60. Allow for the P10 conservation fee per person per day.

For the full story, grab a copy of the December issue of SA4x4 Magazine.