Our most recent off-road adventure took us into the heart of the Ugab River and its surrounding area and then on to the Skeleton Coast. Unfortunately, on the first morning of the trip, none of us woke up feeling very well at the White Lady resort. I was in slightly better shape than the others so I meandered down for breakfast. Asareh slept until 11 am, and even then, she was not feeling very well at all. Lunch the previous day had really done a number on us. To fill in the time, I did some cleaning and small repairs to our vehicle. When Asareh was up and about, we hit the road at noon and worked our way towards the coast. I planned on driving the river all the way to the coast and I saw an old track mapped out, so I dropped directional points on my GPS and we headed off. 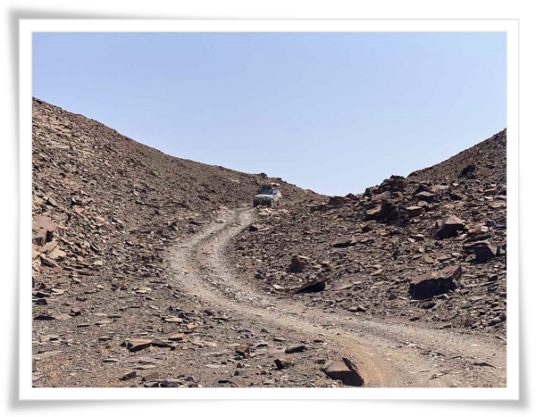 It was a rough day on the road with us not feeling well, but our 4×4 handled well. We passed a small traffic jam and this would be the last vehicles we would see for the next 2 days. After travelling some distance, the trail disappeared and we came to a dead end. Not wanting to go bush bashing, we launched our secret weapon, the drone, and had a look for the old road, which we eventually found. The trail was so overgrown that if you blink you might miss it. I backed up a short distance to get back on track and off we went, continuing our adventure. The rock formations in the area stunning, and apparently, it’s from an old volcano that covered a sand dune filled desert, with remains of rock locked sand dunes still tucked away in some areas. The folds and slices and geology of the rock formations are quite spectacular. Halfway down the track we decide it was tea time and as I hopped out of our vehicle, I was faced with clear set of lion tracks in the sand. Luckily there were no lions accompanying the tracks, or teatime would have been put on hold. 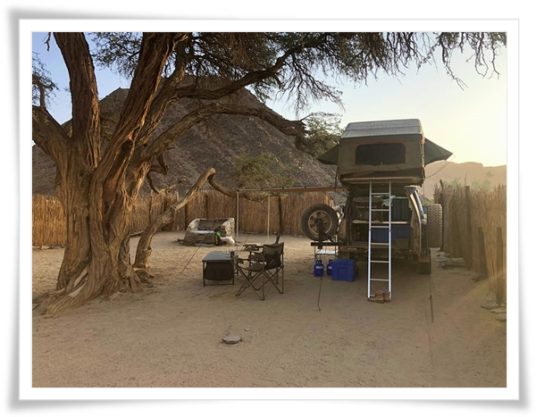 We then powered straight up and over the mountain pass, stopping for a few photos and checking out the old disused mine. Only a few cement tanks remain. At camp about 2km down the track, we set up in the fenced off area, which I assume is for lions and we were warned not to venture far at night. The only place I ventured at night was to the beer fridge, not even the lions would stop me getting a can of the best. Asareh took a nap while I spent some time chatting with other campers. They asked about my khaki clothing and I told them I enjoy bush wear, much to their amusement. The campsite is run on donations, and they have a small area to read up on the rock formations and wildlife in the area. It is definitely worth a stop here. I got a small fire going and as I prepared to cook dinner, a scorpion decided to join us. After supper we turned in for an early night and could hear the laughter of hyenas in the background as their calls echoed through the valleys. 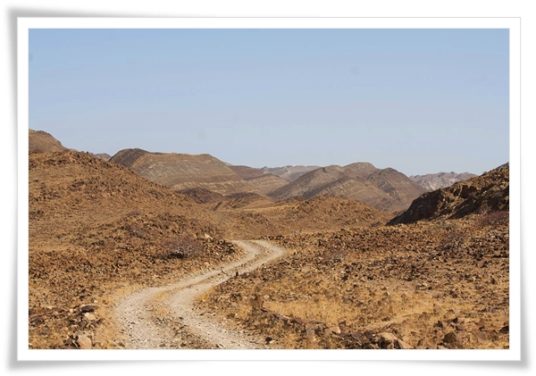 We started our day with the most important meal breakfast, made up of strong coffee laced with a shot of Amarula and boiled eggs, the breakfast of champions. After packing up, we hit the road and quickly found ourselves in another dead end. We consulted the map and soon figured there was a solid 200m of bush ahead, so we turned around and cut back through the small camp and headed back towards the mine. Here I spotted the track where it splits off the entry track to the camp. The road conditions began to look a little rough due to recent rains. Finally we go back onto the main track where we headed west. During the journey, we came across the old lava tubes, which were wide enough to crawl through. You do need proper gear to explore the lava tubes but it was very tempting at the time. 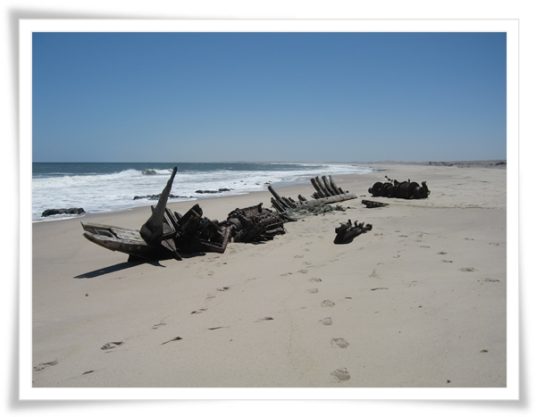 The Skeleton Coast is home to many shipwrecks

Back on the riverbed our vehicle tracks were the only ones for many kilometres. During this section of the trip, we found many blocked routes and had to backtrack often.  We followed the winding river and found where it opens up to the flats and cuts through to the original track which finally came into view. Busting the drone out, we begin filming and while trying to drive at 40km/h and film at the same time, I lost track of the drone position and it disappeared from sight. I was lucky to find it and it only required 2 new blades to fly again. With the ocean in sight, we celebrated making it down the river run. 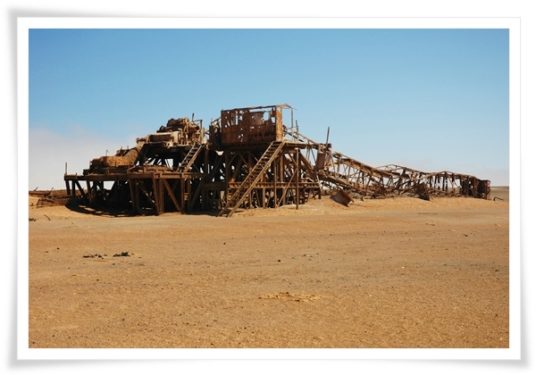 An abandoned oil drill rig at the Skeleton Coast

Our plans for the rest of the day were to quickly zip out to view an abandoned drill rigs and a few shipwrecks along the Skeleton Coast. The woman at the gate didn’t want to let us in but I explained that I just want to go in about 40kms and then return. In the end, my persistence payed off and she finally let us through the gate. 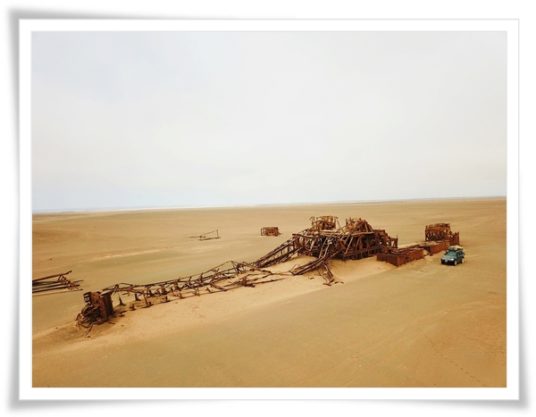 We hit the open road which is in very good shape and made excellent time. Pulling up to the disused rig, it was incredible to see how the ocean salt has destroyed the steel, leaving almost nothing left. 50 years of seaside neglected will do that. Next we stopped at an old boat that had run aground. Most of the boat was missing but the engine was partially intact, even after many years of being weathered by the salty Skeleton Coast environment. 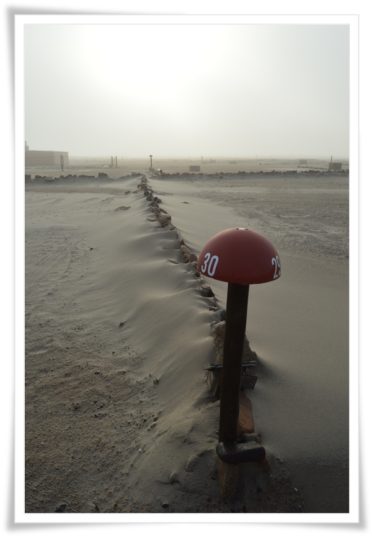 It can get cold and misty at St Nowhere Spa & Campsite

We then made our way back, grabbed a campsite at the St Nowhere Spa & Campsite so we could shower and find a place with protection from the wind, as it can get very cold quickly on the coast. We bought some wood and made a meal of peri peri chicken with gem squash, a simple yet tasty meal. We were over the moon at the success in completing some of the tougher areas through Namibia. We will definitely be back for another trip to Nam very soon.

Vehicle used on the trip: 2007 Mitsubishi Pajero short wheel base

Let us know your thoughts and comments on this adventure by clicking the blue Facebook share button below. If you have an adventure story with images you would like to share with us, we’re all ears. Click here to submit your story. 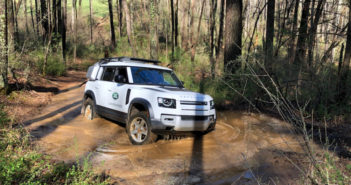 I’ve been a wild Rover for many a year! 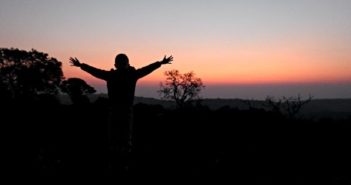 Into the warm heart of Africa – part 3 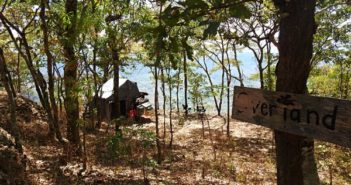 Into the warm heart of Africa – part 2