Words and pictures by Tim Forssman.

Storm Shelter has been described as the greatest rock-art discovery since the first two decades of the 20th century. It also symbolises the hope that there are still sites out there – and great ones – waiting to be found.

This might seem remarkable, considering that we truly have an embarrassment of riches at our fingertips: over 15 000 in South Africa are already known. So, why harp on about the greatness of one? Simply put, because it is probably the best.

It was 1992, and two researchers from the Rock Art Research Institute at Wits University were surveying the mountains near Maclear when a storm suddenly rolled into their valley. They were forced to take shelter or risk the dangers of the very threatening weather conditions. They found themselves in a large rock shelter which had often been used by cattle, as indicated by dung on the floor. This shelter also had faded rock art. As they trawled the walls of this rock shelter, nothing spectacular sprang from its recesses – that is, until they walked around the corner. Here they found that a large boulder from the ceiling had collapsed, who knew how long ago, protecting a portion of the rock shelter from natural elements and animals; and on it they found a 6-metre rock art panel that rivalled anything they had seen before. 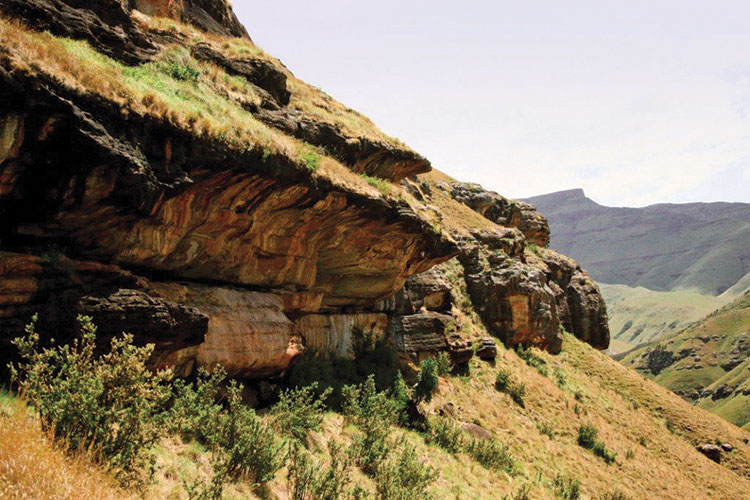 On the left of the panel, there is a beautifully painted eland with a star-like design near its head. Moving further right, you cannot miss the striking eland-like beast, painted larger than any other image. This is a rain animal, often painted to resemble eland, hippos, rhinos or cows, and sometimes a mixture of them. These creatures were captured in the spirit world by shamans, and led across the sky to where they wanted the rain to fall. Further right are two main features of the panel: a combination of humans and animals. There are, in fact, up to four layers of images, some of which are incredibly complex and poorly discernible, and which were only noticed in ’94 when the site was being traced; the changing of the light often reveals new parts of the panel.

The human paintings in the rock shelter are unique. Unlike in most other rock art, they have facial features, including lips, ears, eyes and noses. In addition, they have incredibly large heads. These humans, who are no doubt shamans, are unique, and so different that they are the type-specimens of a new tradition of painting. Yet their features are not realistic, probably indicating personal spiritual power and influence, and suggest that rock art was playing not only a spiritual role but also a political one when this site was painted. Other human forms in the site are called Eldritch figures – weird, unnatural and somewhat hideous. They have claws, fangs and strange body postures. These might be the grotesque beings that depict spirits of the dead.

The area is renowned for its fishing and birding. To be more specific, it is its fly-fishing that is locally popular and very highly rated. There are also dinosaur footprints, hiking, golfing and 4×4 trails, notably at Bastervoedpad, that are worth visiting. The adventurous can abseil down the Tsista Falls, go horse-riding or take a wild-flower tour; and for those who like driving, Gatberg is nearby, as well as Naude’s Nek and the scenic Barkley Pass.