Given that 21 June was ‘World Giraffe Day’, I thought that this would be a great opportunity to share something about these iconic animals with you.

The giraffe – the name is believed to be derived from the Arab word zarafa meaning ‘fast walker’ – has captured the human imagination for millennia. The Roman poet Horace opined that the giraffe’s unique appearance resembled that of a camel with leopard markings, which (together with its Arabic name) gave rise to the scientific title Giraffa camelopardalis.

The earliest human association with giraffes is recorded in the 9000-year-old rock carvings of northern Niger. The forebear of the two extant members of the family Giraffidae (the modern-day giraffe, and the okapi of West Africa) lived some 30-50 million years ago in the forests and plains of Europe, Africa and Asia. Their progression to the long-necked, elegant animals of the present day was a gradual one. It is interesting to note that Giraffes have not always had the long necks we now associate them with. According to the fossil record, the lineage (which later gave rise to the relatively short-necked Okapi,) split from a common ancestor around 14 million years ago. It was about five million years ago that neck elongation began in the lineage from which Giraffes evolved to their modern proportions. How Giraffes evolved their long necks has been the subject of debate dating back to the early days of evolutionary theory. In truth, it continues to be something of a mystery, with scientists still not in complete agreement as to its genesis. 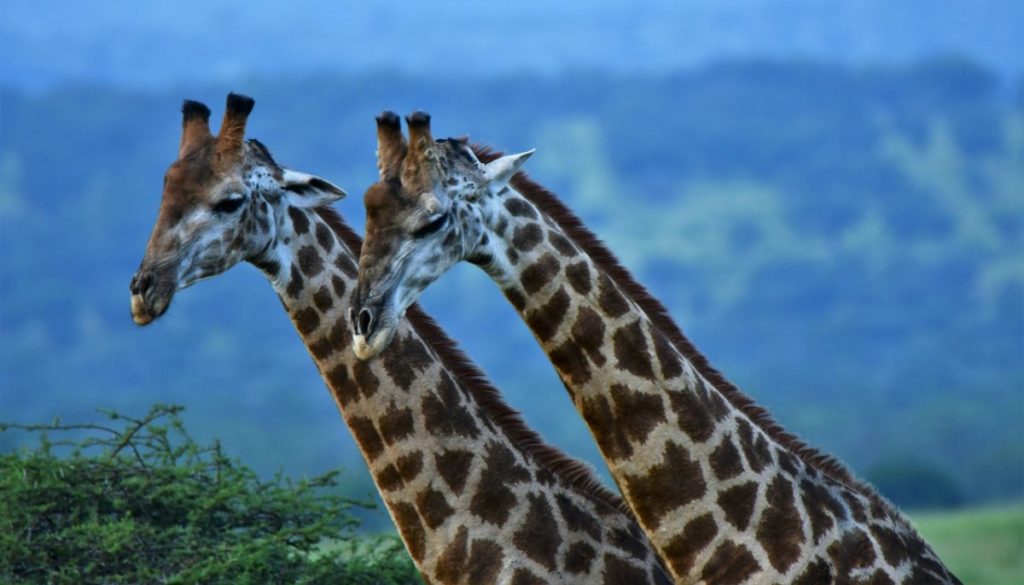 However, there is consensus about the adaptations Giraffe physiology has had to undergo due to this uniquely long neck, the most remarkable of which are to its circulatory system. For blood to reach the brain, it has to be pumped ‘uphill’ for at least two metres. (In comparison, an adult human heart has to pump blood up only around 35cm to achieve the same end!). So, how does a Giraffe achieve this feat? The answer: by applying pressure. Relative to their overall size, a Giraffe’s heart is not abnormally large. What is exceptional about it, though, is the thickness of the wall of the left ventricle – the chamber of the heart that pumps blood around the body. What is just 11mm thick in humans, can be as much as 80mm thick in a large bull Giraffe! This allows the giraffe heart to pump blood out under extremely high pressure, thus overcoming both the effects of gravity and hydrostatic pressure. The blood vessels close to the heart are prevented from exploding under such high pressure by an elastic coating 12-15mm thick, which decreases progressively as their distance from the heart increases.

Giraffes also have a complex blood-pressure-regulation system. When a Giraffe bends down to drink, a series of one-way valves in the jugular vein prevent blood from flowing back into the brain. On the other hand, a specialised structure at the base of the skull – called the rete mirabile caroticum – collects blood from the external carotid artery, and regulates the quantity of blood released into its head as it bends over. This prevents a catastrophic rise of pressure in the brain.

This also works in reverse. When the giraffe raises its head quickly, the rete mirabile caroticum stops blood from draining out of the brain too rapidly. The presence of inflexible collagen fibres around the blood vessels, and a tight sheath of thick skin around the lower leg, also helps prevent blood pooling in the lower extremities – properties which were studied extensively by NASA scientists when they were developing astronauts’ anti-gravity suits.

After millions of years of evolution, the Giraffe has taken its rightful place as the tallest mammal on earth, and one whose circulatory adaptations may provide insights for the treatment of a disease currently thought to affect a billion people worldwide – high blood pressure, or hypertension.

However, this remarkable animal now needs assistance to survive. Giraffe numbers have declined by almost 30% in just over three decades, so that there are likely only 111 000 left in the whole of Africa. In some areas traditionally regarded as prime Giraffe habitat, numbers have dropped by 95% in the same period. In 2016, as a result of these findings, the status of Giraffes was up-listed on the IUCN Red List of Threatened Species from ‘Least Concern’ to ‘Vulnerable to extinction’.

The Giraffe Conservation Foundation (https:www.giraffeconservation.org) is currently the only NGO in the world that concentrates solely on the conservation and management of wild Giraffe throughout Africa. I believe the time has come for those of us who love visiting Africa’s wild places and seeing these majestic animals in their natural habitat to become more actively involved in helping them to continue to stand tall in the future.