The Zulu people call the hippopotamus imvubu. As Credo Mutwa has pointed out, “This word has several meanings, one of which has to do with mixing several things in a container… In this sense, the word imvubu means ‘the mixed up creature’, or ‘the creature which is unable to make up its mind what it is’. It behaves like a crocodile, but it looks like a combination of a rhinoceros and an elephant.”

Although this is the stuff of legend, a hippo is indeed a unique animal: it is a terrestrial mammal whose closest relatives are whales and dolphins, a two-ton rotund mass that can sprint at 40kph, and a herbivore with tusks that play no part in feeding and are used entirely as weapons.

A further distinctive characteristic of these paradoxical animals is their ‘blood sweat’, which is actually neither blood nor sweat. Produced from glands that lie deeper than normal sweat glands, the secretion is even more remarkable than the ability to sweat blood would be! Containing two pigments − red hipposudoric acid and orange norhipposudoric acid − that collectively scatter light, it combines both sun-screening and sun-blocking properties. Given that hippos’ skin is incredibly sensitive to heat – up to seven times more sensitive than that of other mammals – this self-manufactured balm is essential to its life under the African sun.

As if that were not astonishing enough, scientists have recently found that these red and orange pigments (in addition to their sun-screening activity) are acidic, non-benzenoid aromatic compounds that have antibiotic properties. 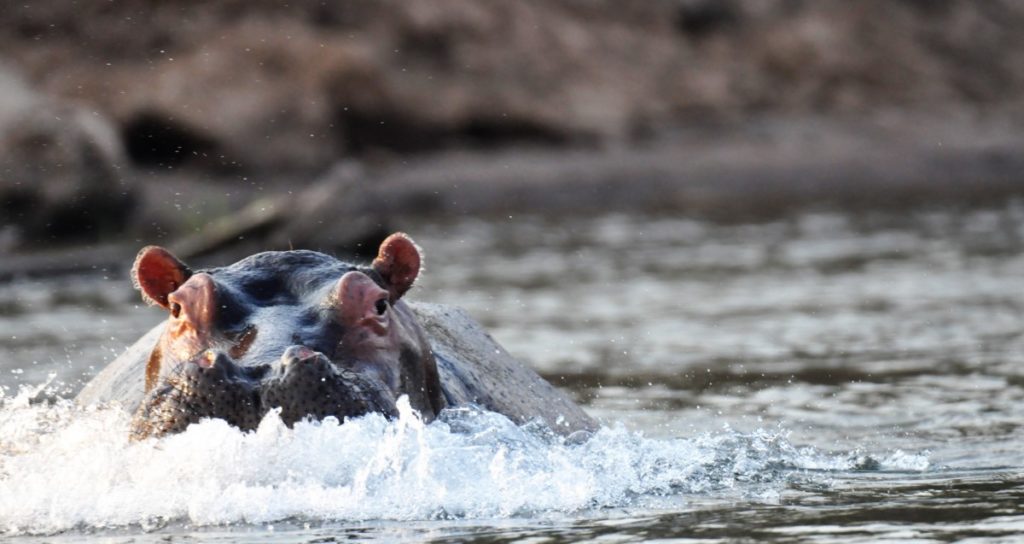 Male hippopotami are highly territorial and will fight aggressively for dominance, using their formidable teeth. Flesh wounds are common; having an ‘on-board’ antibiotic doubtless lowers the risk of infection.

Hippos spend up to sixteen hours of each day wallowing in shallow water, and have developed a range of adaptations to facilitate their largely-aquatic lifestyle. With eyes, ears, and nostrils on the top of their head, hippos can hear, see, and breathe while most of their body is under water. The nostrils close when they are under water, and they are able to hold their breath for five minutes or longer, depending on how active they are. Hippopotamuses can also see when under water, thanks to a clear membrane that protects their eyes. Moreover, it is believed that the hippopotamus’s lower jawbone allows it to distinguish sounds under water, in the same way that whales and dolphins do. Yet, despite these adaptations, hippos cannot swim!

So, how do they move around their watery home? By walking under water, of course! As a result of their high bone-density and elevated specific gravity, they are almost always able to maintain some contact with the bottom, and walking or bouncing off the substrate using these contact points as a source of propulsion. So, although the water increases resistance to movement, it also buoys the animal up. “This increased buoyancy effectively acts to make water a microgravity environment.” (Coughlin & Fish, 2009)

Their oft-portrayed movie image as roly-poly cuddly creatures is gravely misdirected.  With a bite equivalent to 138 bars of pressure (an average adult human’s is 17 bar) these animals are not to be trifled with. When choosing a campsite along a river, you need to make sure that you are not blocking a hippo path: anything that comes between a hippo and the water will get trampled. The statistics are fairly vague, but suffice to say that the hippo is considered the world’s deadliest large land mammal, and kills an estimated 500 people per year.

The common hippo is listed as “vulnerable” on the IUCN Red data list, due to loss of habitat as well as to the increased poaching for their meat and tusk-like teeth. Over 7300kg of hippo tusks and teeth were internationally traded in 2018 alone – a 64-fold increase since 2007. According to the Wildlife Conservation Society, there are an estimated 125 000 to 150 000 common hippos left in Africa – approximately one-third the number of elephants. This represents a decline of as much as 20% during just the last decade. In the future, we as conservationists and lovers of nature need to ensure that these enigmatic ‘mixed up animals’ of the African waterways are afforded the same protection as elephants and rhinos, to ensure that they ‘swim, rather than sink’ as a species.