For the last six years, the Fortuner has dominated the SUV market, with little – if any – threat posed by its competitors. This could all change after the recent unveiling of the Chevrolet Trailblazer, a vehicle which promises good value for money and some class-leading features of its own. 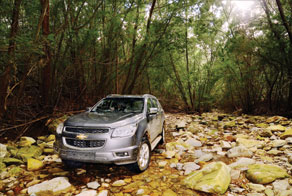 If there’s any truth to the saying ‘third time’s the charm’, the highly-anticipated Chevrolet Trailblazer should have what it takes to dethrone the Fortuner; or, at the very least, force the Toyota to face abdication. Before now, the Ford Everest and the Mitsubishi Pajero Sport were the only other bakkie-based SUVs brave enough to storm the Fortuner stronghold… but neither was able to scale the barricades. The numbers paint the picture rather convincingly: the Fortuner sold 1 021 units in the month prior to writing, compared to the Pajero Sport’s 35, and the Everest’s 14.

Prior to its official media launch, GM SA selected SA4x4 as one of a few publications to receive a pre-released Trailblazer. Because the vehicle hadn’t yet been launched at the time of writing, we didn’t have full access to the Trailblazer’s pricing and specification data, but we did get to drive the Chevy on several 4×4 trails. Here are the results of that testing.

Once he gets you sitting the cabin, your Chevrolet salesman will try to sell you on two features: one, the Trailblazer’s third row seating folds down flat against the floorboards; and two, the vehicle is said to have a best-in-class legroom, offering about 25 mm more than the Fortuner. 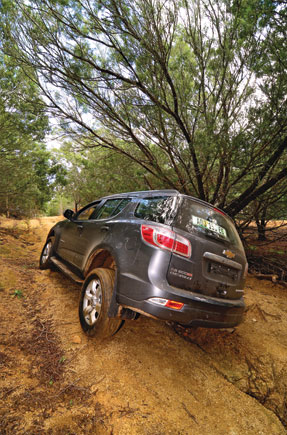 The salesman will surely go on to point out the Trailblazer’s numerous stowage compartments: deep door pockets, centre consol storage, an extra cubby above the glove compartment, and a flip-up tray on top of the dashboard. There’s even a clever cut-out in the cargo area that’s designed to accommodate the roll-up boot cover – an awkwardly long item that normally gets dumped on the garage floor when not in use.

In a head-to-head comparison, I’d say the Trailblazer’s cabin is roomier than the Pajero Sport’s, and constructed to a similar build quality. When pitted against the Everest, the Trailblazer is superior on all fronts. However, in my opinion, the Fortuner’s cabin is still the best of the bunch, with firmer finishes and superior material choices.

What about space? Well, here’s a fact you probably won’t read anywhere else; despite the fact that the Fortuner is narrower on the outside (by 60 mm), the Toyota’s cabin is actually 20 mm wider on the inside, offering more lateral room when measured from one armrest to the other on the second row. In my opinion, the Fortuner’s seats are more comfortable than the Trailblazer’s, but if I had to choose a winner in the comfortable seat category, I’d vote for the Pajero Sport’s firm seat design and terrific driving position. Both the Fortuner and the Trailblazer sport similar creature comforts, including cruise control, steering-wheel-mounted satellite controls, and rear-seat ventilation. However, the Fortuner throws down a trump card with its 15.5 cm touchscreen infotainment system, which incorporates a reversing camera display.

The Trailblazer’s audio system is reasonably good; my only gripe is their decision to go for a micro-USB port rather than a full-sized unit. You won’t be able to stick a flash drive or USB stick directly into the head unit; you’ll need an adapter – and they aren’t always easy to come by.

EXTERIOR
Although previous versions of the Trailblazer exist in the US, this particular model is brand, spanking new. That includes the Trailblazer’s suspension system, chassis design, and diesel engine options. Dimensionally, the Trailblazer is 4 878 mm long, 1 902 mm wide and 1 834 mm high. That makes the Chevy 170 mm longer and 60 mm wider than the Fortuner. It also means the Trailblazer is now the biggest of the three bakkie-based SUVs.

This vehicle received lots of attention during our week-long test, with most folks impressed by the Chevy’s nose, but not many liking its rather forgettable rear. The Trailblazer actually shares a few design traits with the Fortuner, specifically its near-identical running boards, similarly flared wheel arches, and the wraparound trapezoidal rear window.

I’m curious to see what aftermarket manufacturers will come up with in the way of a bull-bar for this vehicle; from what we can see, it’s not going to be an easy job – the bumper line traces all the way up the side of the Trailblazer’s headlights.

OFF-ROAD
The Trailblazer doesn’t come with a rear diff-lock; instead, it’s got a limited-slip diff. It’s an obvious oversight, especially for a vehicle with such a bold and distinctive name. Luckily, buyers can opt for an optional ‘mechanical diff-lock’, which was fitted to our test unit. However, you can’t lock up the wheels yourself – this item automatically engages when a differential wheel speed of approximately 100 rpm is sensed on the rear axle. To put it another way: if one of the rear tyres loses traction, the locker will self-activate the moment the slipping wheel rotates at a speed 100 rpm faster, after which the device will remain in the locked position until the vehicle’s speed exceeds 36 km/h, or if a torque reversal is sensed.

Problem is, you basically have to spin the tyres before the locker will engage. This damages the terrain, could hurt your tyres, and causes a momentum loss in the time it takes for the locker to react to the slippage.

Apart from the abovementioned shortfall, the Trailblazer will handle most off-road scenarios. Every now and then our test vehicle kicked up some dust – due to a spinning tyre – but it managed most obstacles with ease. You just need to remember to stay on the throttle long enough for the diff-lock to kick in.

As a part-time 4WD, the Trailblazer can switch (via a small electronic dial) from 2WD to 4-high or 4-low; the vehicle is also equipped with traction control but this automatically deactivates once low-range is selected. At the time of writing, we didn’t have access to the Trailblazer’s approach, ramp or departure angles; however, neither of these areas proved problematic during our off-road test. In fact, if I were to venture a guess, I’d say there’s a good chance the Trailblazer’s approach angle is even better than the Fortuner’s 30°.

When combined with the Duramax diesel’s high compression ratio, the Trailblazer’s first gear low-range provided a slow and controlled descent on slippery inclines. In thick, soft sand, we found the Trailblazer preferred third gear low-range rather than second – the former offered a wider torque range with enhanced momentum, while the latter proved too short and a bit revvy. Our experience taught us that the first two gears are best for rough rocky work, while the third and fourth are better suited for sand driving.

Like most bakkie-based SUVs, the Trailblazer features a solid axle at the rear, independent suspension upfront and coil springs all round. I found the Chevy’s ride quality pleasingly pliant on gravel. When the going gets tough, the Trailblazer offers good suspension travel and traction performance. We recorded a RTI measurement of 432 for the Trailblazer, beating the Fortuner’s 410 and the Pajero Sport’s 385. The Everest has yet to be tested on our RTI ramp.

ON-ROAD
The Trailblazer has three engine options: a 3.6-litre V6 petrol, a 2.8-litre turbo-diesel, and a 2.5-litre turbo-diesel. However, the smaller engine of the two diesels is only available with a 2WD drive train. Our test vehicle was fitted with the all-new 2.8 Duramax motor: an engine capable of 132 kW @ 3 800 rpm, and a massive 470 Nm @ 2 000 rpm. It’s a difficult motor to describe; perhaps it’s best to say that this unit slots in somewhere between the Everest’s 3.0 TDCI and the Fortuner’s 3.0 D-4D. The Ford engine produces massive torque at very low engine speeds – as soon as its rev counter moves, the TDCI engine is raring to go. It’s a terrific engine and one of my all-time favourite diesels. The Toyota D-4D engine is similarly eager, but the really great thing about this motor is its willingness to rev. For this reason, the D-4D is a great engine for sand driving as there’s no need to worry about high revs or the power dropping off – this motor can handle redline abuse. In comparison, the Trailblazer’s Duramax motor is not punchy like the Ford and it can’t rev like the Toyota, but it offers monster mojo throughout the midrange. Thanks to the Duramax’s variable vane turbo, this engine shows no signs of turbo lag; instead, its torque delivery is gradual and smooth.

On the open road, the Trailblazer’s ride quality is smooth, flexible and comfortable. However, these traits work against the Chev when running through tight turns, where the Trailblazer feels a little loose and marginally top-heavy. But don’t be alarmed, as it’s more a perception thing than a genuine concern. Much like the FJ Cruiser’s suspension, the Trailblazer feels spongier than it really is. The Trailblazer comes with two transmission options: a 6-speed automatic or a 5-speed manual transmission – as fitted to our test vehicle. For the most part, there’s little to say about the manual gearbox; the shift action is relatively smooth and the gates offer positive selection. However, when traversing long, steep gradients, I found the ratiojump from third

to fourth a little wide – third had the engine screaming, while fourth saw it labour a bit.

CONCLUSION
In many respects the Trailblazer has what it takes to rival the Fortuner, but it’s difficult to call it without knowing the Chevy’s launch price. In my opinion, the Fortuner’s still a better vehicle, as it comes with HID headlights, a 15.5 cm touchscreen infotainment system, reversing camera, a tried and trusted construction, proven resale value, and Bridgestone AT tyres (vs. the Trailblazer’s Bridgestone HT tyres). (We’ve been told by the folk at Bridgestone that their AT tyres offer better off-road traction and improved tread wear due to a harder compound construction).

You might argue that the Fortuner is six years old, but that’s precisely what works in its favour; Toyota have used that time to continually improve their vehicle: upping its performance, features and value-for-money offering.

Instead of trying to beat the Fortuner with a revolutionary new vehicle, the Trailblazer has mimicked the Fortuner’s winning formula while presenting some welcome features of its own. All in all, the Trailblazer is a great first attempt and it will only get better from here on.

My guess is that the Trailblazer will draw people who don’t want to be yet another family in a beige, white or silver Fortuner. But if the Chevy really wants to make its mark, it’ll have to be significantly cheaper than the Fortuner – say R40k or so. If it can do that, the Trailblazer stands a good chance of raiding the Fortuner banquet and might even hit triple-digit sales figures every month. Either way, the Trailblazer’s arrival heralds an important milestone in our automotive history: it may not be better than the Fortuner, but it marks the beginning of the end of Toyota complacency – especially when there’s talk of a new Ford Ranger-based SUV on the horizon. We live in interesting times…