Launched in 2005, the Toyota Fortuner was well received thanks to its practicality and comfort compared to a bakkie, infamous Toyota reliability and parts availability. It suffered a bit from feeling too similar to the Hilux on which it is based and a lack of stability control made rollovers a real threat. Many owners fitted aftermarket suspension to counter the problem and luckily Toyota relatively quickly fixed the problem with the facelift. Now in its third generation, the Fortuner has been majorly redesigned and is available with one petrol and two diesel engines. 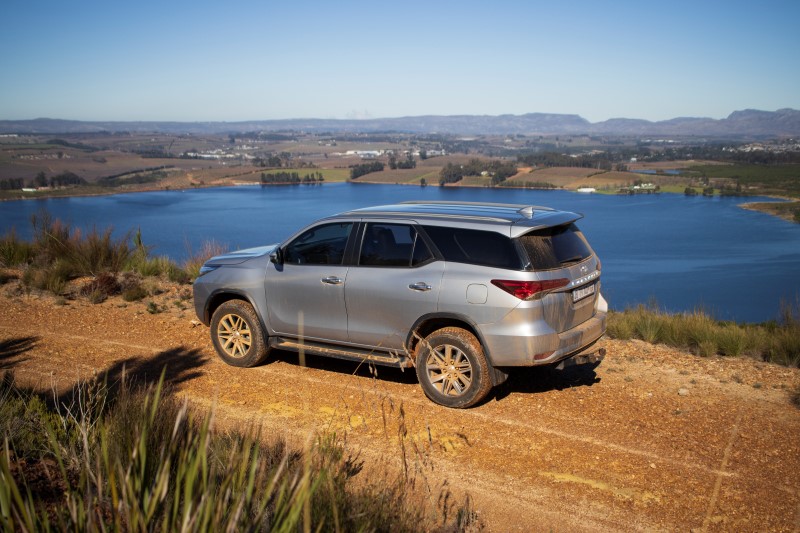 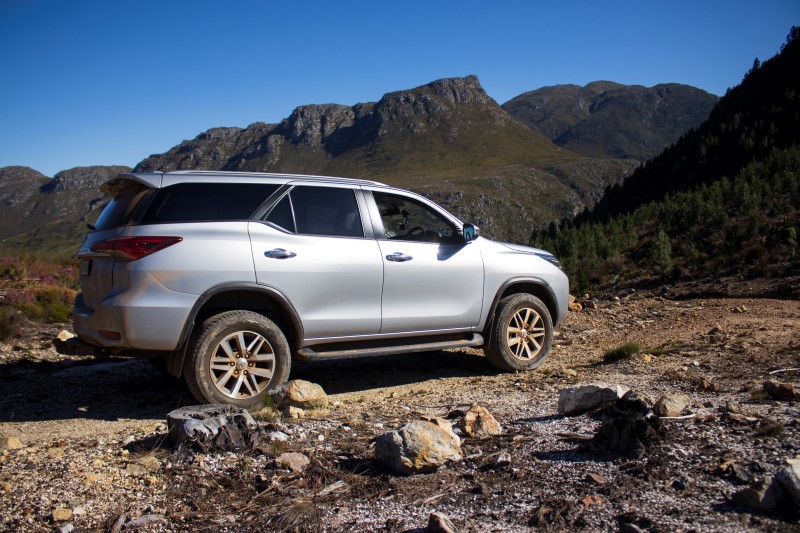 Unfortunately, the infamous 4.0L V6 petrol engine has been removed from the line-up. Let’s be thankful for what we have though and the 2.8 GD6 of our test vehicle is a treat. Combined with the responsive 6 speed automatic the vehicle is quick to respond to driver inputs and thanks to the low-down torque of the engine the Fortuner always does what you need it to do, whether it is to overtake another vehicle or to climb up a obstacle on your favourite 4×4 trail.

You can choose between ECO and PWR (power) mode to alternate between two vastly different driving modes. In ECO, the vehicle heavily reduces the responsiveness of the throttle pedal and the aircons output and in return delivers great fuel economy figures. On our drive to Grabouw 4×4 which mainly consisted of highway and some mountain roads, the Fortuner returned 8.2L/100km while always driving at the speed limit. We weren’t trying to set fuel economy records, just a normal drive to the trails. City driving those figures hovers around 10L/100km. Spirited off-road driving sat around 11.4L/100km. PWR mode makes the throttle pedal and gearbox response hypersensitive. It is worth pointing out how quiet and smooth the 2.8 is compared to the previous 3.0 D4D is. NVH levels are vastly improved for the new generation. 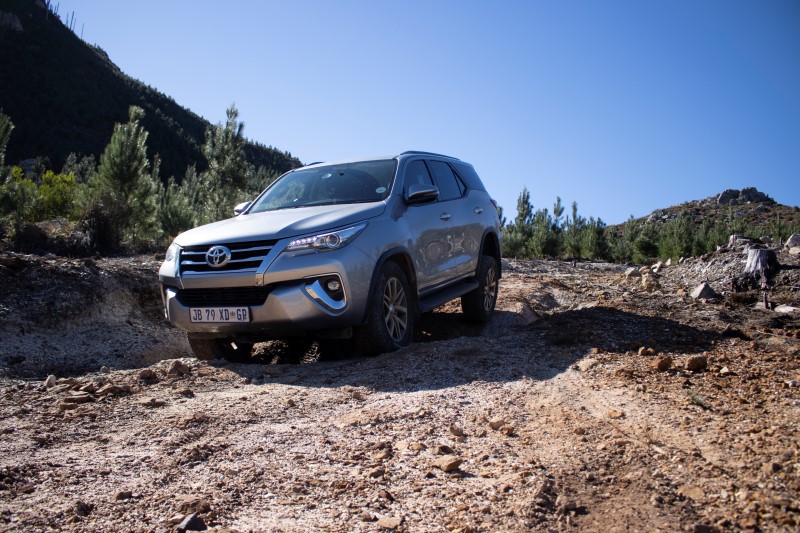 In past models, the interior is very similar to the Hilux on which it is based. For the new model the interior has been completely redesigned and only the infotainment system is shared with the Hilux. The 8” touchscreen features Bluetooth connectivity, navigation, some economy information and powers a pretty decent speaker array. Interior features are complimented by three 12v lighter sockets, a USB port for charging devices or audio input, a 220v two-point plug and independent rear climate control.

The spec on our vehicle is a bit marmite with its dark chocolate seats, some people love it and some hate it. In our opinion it contrasts the Chromium Silver paint well and adds a bit of colour to the interior. Minimal use of cheap plastic helps the Fortuner feel premium on the inside, which aids in justifying the R740 000 price tag of this model.

On to the nitty gritty of any off-road vehicle, how it handles the rough stuff. The decision was made to use Grabouw 4×4 as we feel it is a good representation of the type terrain the Fortuner will be used on most. It has a nice balance of gravel roads carved into the mountains and technical sections where the 4×4 system and diff lock can be tested. Most of the trail was done in High 4 with only really loose and rutted sections needing low range and only one needing the rear diff lock. As with the Hilux, what let the Fortuner down is the Dunlop Grandtrek AT tyres. Despite this, we encountered minimal wheel spin as the 4×4 system was quick to sort itself out and send the power to the wheels with traction. In low range, the automatic gearbox knows when you want to hold a gear and when you want it to shift to the next gear, it’s voodoo magic.

The suspension all round has a decent amount of articulation and should be able to keep the wheels on the ground on axle twister obstacles. It is worth noting that the suspension is where the Fortuner differentiates itself from the Hilux. The Fortuner has multi-link coil spring rear suspension, where as the Hilux has leaf springs. This does wonders for both on and off road handling and ride comfort. The Fortuner drives much softer than the Hilux especially in the rear without adding any more body roll, but at the end of the day they were designed for different use cases. Hilux for load, Fortuner for people.

In terms of the exterior it is once again a major step up from previous generations, as it no longer tries to mimic the Hilux. Striking without being too in your face. The Fortuner now looks and drives like a model on its own and not just the SUV version of a bakkie.

Also we would very much like to take this opportunity to welcome the newest editions to the Toyota Corolla family.
Their new range of Corolla’s sedans and hatches which make for the perfect fuel efficient town-run-around vehicles.

However if you feel that curiosity has got the better of you – we highly suggest having a sneak peek at their other enhancements which Toyota have adapted to the remainder of their fleet ranges.