From the moment I saw the Donkerpoort 4×4 website, I suspected that this 19km track would provide some challenges. 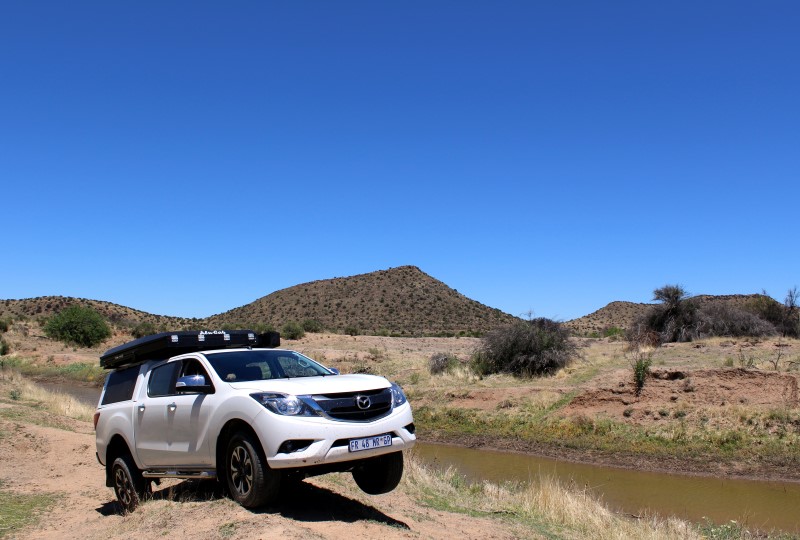 Articulating your suspension is the name of the game at ‘Playground 1’ at Donkerpoort.

Opening times: All year, but check with Ernie about rainfall in March.

Terrain: A combination of gravel, shale, mud, a touch of sand and a lengthy water crossing through the Karoo flats and mountains, makes this a varied and engaging trail. There are several steep inclines (max 40°+) and steep descents, especially if you try the various testing playgrounds Ernie has set up along the way, but you can bypass these. Tell Ernie your requirements, and he’ll have a route made-to-order for you.

Distance: 19km – but it can be shortened to your requirements.

Recovery facilities: Yes; your guide and host will assist in recovery.

Tyre tracks: Only necessary in the rainy season – November to March.

Tyre pressure: I ran mine at 1.9 bars in front and 2.0 bars at the back for the variable terrain and weight of my rig, and had no problems.

What vehicle were we driving? Mazda BT-50 4×4, 3.2l turbo-diesel with intercooler.

PRECAUTIONS: This track will test you, particularly in the optional ʻplayground’ areas and the tougher choices of mountain-ascent in places, but there are escape routes. I suggest you select diff-lock and low-range sooner rather than later, and take it slowly.

BRING YOUR: Wife and kids. There is currently no on-site accommodation, and I would suggest that only seasoned 4×4 family members go along for the ride. However, if family members stay in Gariep Dam town at one of the many charming B&Bs or the Forever Resort, they will be able to entertain themselves while the 4×4 members of the family pit themselves against the Donkerpoort trail.

Pets: This will depend on where you stay.

ACCOMMODATION: Not on-site; the Gariep Forever Resort is highly recommended, but check Google for a vast array of other good options.

And, when I saw farm-owner Ernie Griessel’s customised Toyota Legend 45 3.0 D-4D Hilux, I felt that these suspicions had been confirmed. It was game on.

What concerned me more than the bakkie’s ability, or my own, was my brief rather to err on the side of caution with the long-term Mazda BT-50 4×4 ‘camper’, and if I was in doubt about a particular section, rather to leave it out. Trouble is, you never really know how difficult a section is until you’re in it. Besides, after what I’d already been through with this vehicle, I was confident that it could take on all but a Grade 5. I hoped I was right.

“Okay, Nick, should I take it over this first obstacle, or would you like to?” Ernie asked me about five minutes after we’d left his farmhouse. We’d already faced some rough shale tracks before arriving at the short, 40° slope in front of us, and I was glad I’d had some strong plaas coffee before we’d set out. I needed my wits about me from the start of this trail.

In the end, I let Ernie take the BT-50 over the first challenge − marked by red flags on either side − while I took some photos; he got the bakkie over that one easily. This kind of optional obstacle was one of the many that visitors can choose to take on (or not) along the route, and is one of the reasons why the route is offered only on a guided basis.

After the first few kilometres of ‘’warm-up’’, we descended a kloof, and a typical southern Free State vista opened up in front of us. Green swathes of acacia trees led my gaze down a water-rich contour towards the grassy plain in the middle distance, its expanse eventually halted by a flat-topped mountain on the horizon. As we rounded a corner, we saw a golden wildebeest with a clear identity-crisis gambolling among a small group of horses.

We bounced and yawed our way through another pasture containing more fine-looking herds of golden wildebeest, and Ernie told me how he had, until a short while before, been involved with breeding these unusually-coloured animals and various other rare game species. He’d decided to halt further investment in this endeavour because (as another Karoo farmer friend of mine has confirmed), although you may strike it lucky, it’s an industry in which the ‘flavour of the month’ varies greatly; and this makes demand for stock fickle, at best.

After we’d followed a sharp right turn and a steep descent down the dam wall we’d been driving along, the first of Donkerpoort’s optional 4×4 playgrounds presented itself. Marked out with red flags on  poles, these few hectares offer the ideal way to test your 4×4 driving skills and perhaps compete against the others in your party, based on penalty points achieved for touching or knocking the markers down. As I wanted to take photos again, Ernie did the majority of the driving; and besides the BT-50’s tow bar snagging here and there, there was only one very deep culvert that caught the camper’s entry-angle out and threatened to take the front bumper off. However, Ernie managed to bail out with some skilful reversing.

I took over the driving from there, and we were soon setting off up the steeper of two pass options: one that was to climb around 300 metres at 35°plus. In low-range and with the diff locked, I wedged my foot against the kick panel next to the accelerator and we ‘pole pole’ (Swahili for “slowly slowly”) made our way up the slippery shale track.

Taking one’s time, and not trying to floor it up a mountain, is certainly both the most eco-friendly and effective way to summit a pass of this nature. I was reinforced in my belief that the only time one needs speed and momentum is when one is in very thick sand.

We took time out to take in the views from the top, and Ernie explained the layout of the farm to me; also proudly pointing out a herd of fine-looking and highly adaptable Nguni cattle in the distance. He also showed me the Bloemfontein railway line that runs through the middle of his farm, and pointed to a grove of trees where apparently some Boer saboteurs had been hanged (I assume the Brits thought they were in the so-called Cape Rebels) for blowing up ‘crown property’ during the Anglo Boer War.

Once down the mountain and through the dry grass of the valley, we ran next to the railway line for a while; and then, soon after ducking under a bridge, we headed straight for a river. I was still looking for the place where we would ford it, when Ernie casually mentioned that this was not necessary, as the river was to be our road for a while.

With a wade-height of 800mm, I was reasonably comfortable that the BT-50 wouldn’t have a problem; but, with no way of being able to judge the depth of the murky and algae-covered waters, I was very glad to simply follow Ernie’s directions. I felt as if we were on a Burton and Speke expedition in ‘darkest Africa’ of yore as we followed the languid river for a couple of hundred metres, then exited right up a bank and onto the dirt track once more. 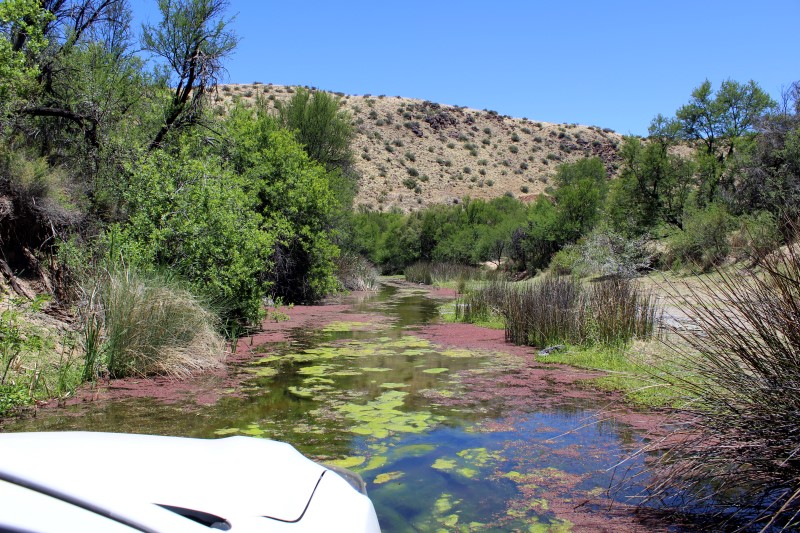 And then the road became a river. A 200m river crossing was a welcome surprise.

I couldn’t believe the little tropical enclave that we’d just waded through, and in the Free State nogal! I was also amazed to discover we’d covered only about eight kilometres, and had been in the car for just under two hours. And, according to Ernie, we still had more than half the course to complete.

After travelling a few kilometres east, across the railway line and through a striking kloof, we arrived at the foothills of another sizeable flat-topped mountain − and I saw the second pass-challenge beckoning. It wasn’t quite as steep as the first one, but when we stopped at the top, I noted that the views were just as spectacular.

Standing next to one of his favourite view- and braai sites on the farm, Ernie first pointed south to show me where the Gariep River lay; then, indicating a mountain to the east, he told me that he wanted to carve an extension of the 4×4 trail there from which visitors would be able to enjoy vistas over the mighty Gariep Dam. Although unnecessary in terms of the multitude of 4×4 experiences and varied scenery currently available to trail users, it certainly will be the cherry on the top of an already exhilarating trail.

To contact the owner, fill out the form below.