What to do when confronted by a dangerous animal

One of the greatest pleasures in life is parking and setting up camp in the bush, or in a campsite in natural surroundings where you can feel at one with nature. The sights we see become memories for ever, and being in close proximity to wildlife only adds to the enjoyment. Having the odd warthog mooching around the camp, as common as they may be, is an amusing event.

Of course, some encounters with animals are memorable for other reasons. Stumbling across an elephant in the bush can be a very challenging and frightening experience. It begs the question: “How should one react if confronted by an aggressive animal?”

It is only when you get up close that you fully appreciate just how big these land giants are, and how dangerous they can be. Never spook, startle or confront an elephant; you may pay with your life. Give them as wide a berth as possible. Although any elephant can be dangerous, lone males (especially in must) are exceedingly dangerous, as are cows with calves.

These giants, which may weigh 3000 – 6000kg, are often perceived as being big and cumbersome − but they can charge at 40km/h, which certainly gets our adrenaline pumping faster than any scary theme-park ride ever could.

Although elephant have poor eyesight, this is more than made up for by their enhanced sense of smell and hearing. Elephant may mockcharge by spreading their ears wide, stamping the ground and tossing grass and dust into the air. But take this all seriously: it means business.

Don’t turn tail and run, as an angry ellie may keep after you; rather stand your ground, shout, wave your arms in the air and throw stones or anything else you have to hand. Elephants are not as easily intimidated by humans as other animals are, but this may be enough to stop one in its tracks.

A full-on charge is an entirely different story. I would not want to be standing there waving my arms as a 3000kg hulk came bearing down on me, in the vain hope that it was going to stop in front of me in a cloud of dust like a well-trained dog. I’d want to be somewhere else very quickly − like behind a very large tree or rock, or down a hole.

If you come across an elephant unexpectedly (they may be big, but believe me, they can be very difficult to spot in the bush), then stop, remain very quiet, and slowly retreat while maintaining eye contact with it. Keep your movements slow and deliberate. 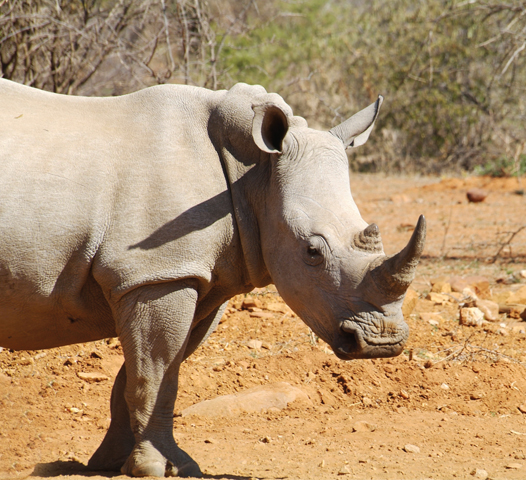 The respect needed for elephants applies equally to rhino. Any large animal with horns or tusks, which moves more quickly than you could ever run, is potentially dangerous. A charging rhino can unleash an amazing amount of power, and the ground vibrates beneath you. It is certainly a heart-stopping encounter you would not wish for. I was once in a car that was nearly broadsided by a rhino, and that was scary enough. Fortunately, it missed us by a cat’s whisker.

Both elephants and rhinos have poor eyesight, but their smell and hearing are acute. If they get a whiff of you, they will be long gone before you stumble across them. Even if you spook them, they tend to turn tail and run in the opposite direction, away from you.

In the unlikely event that one does charge you, and there’s nowhere to go, stand your ground, shout, wave your arms and throw rocks at it. In most cases, the rhino will veer off when it is 15 or 20 metres away and run past you. I was once told that I should “… stand still, and when you see the whites of its eyes, simply step to one side”. I have always wondered whether the person who came up with that piece of advice practised what he or she preached. You are not some sort of matador teasing a bull. A charging rhino is vastly more dangerous.

If trees are in the vicinity, get behind one (and hope that the rhino doesn’t run into it), and keep off anything that appears to be an established trail, as the rhino may use this as a getaway route. As with elephant, they can be surprisingly inconspicuous when browsing in the bush, so be extremely vigilant. 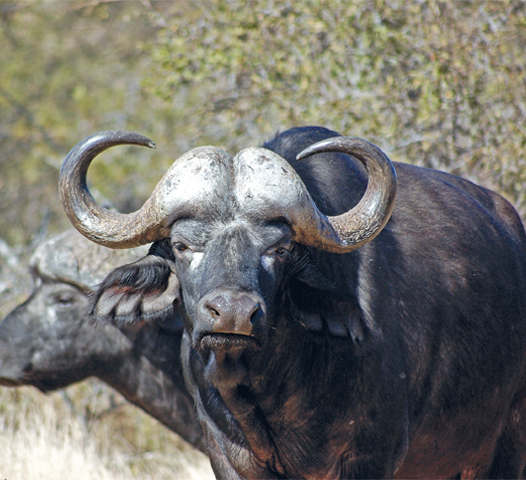 It is widely accepted that the buffalo is one of the most unpredictable and dangerous animals that you can encounter in Africa. A misconception is that the buffalo is related to, or an ancestor of, the domesticated cow. This could not be further from the truth, as the two are like chalk and cheese. The unpredictable temperament of buffalo has prevented them from ever being domesticated.

Buffalo are big, short-sighted, shorttempered, and certainly not an animal to be approached; they are justly deserving of their local name of “widow-maker”. They kill more people in Africa than any other land animal except the hippo.

Fortunately, they have an acute sense of smell, so that if they scent your coming, they will often leave the area long before you arrive. However, some buffalo (particularly cows with calves, injured or sick individuals, or lone bulls) may take exception to your being there, and these may charge without provocation. They are particularly dangerous if you stumble across them in thick bush. If this happens, backtrack slowly while keeping a low profile. 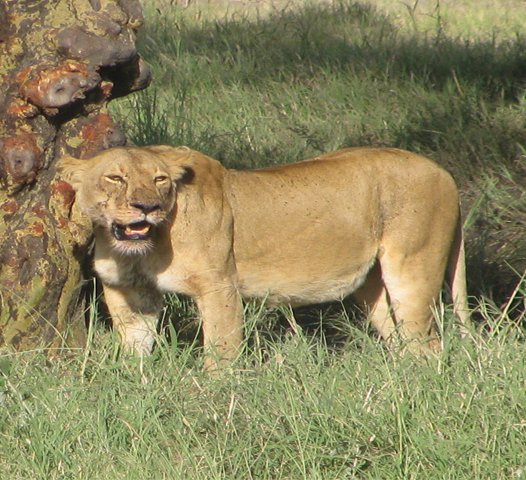 Being confronted by a lion is possibly one of the scariest encounters you could possibly have. Just their roar gives you goose bumps. And, if you hear a roar while in a tent at night… well, goose bumps on goose bumps.

When spooked, lions can become very aggressive. They may simply get up and wander off after uttering a low warning growl, but growling accompanied by flattened ears and crouching down means that they are ready for confrontation. This usually progresses to a stalking trot, before they change gear into a full-blown charge. Just as when confronted by a dog, NEVER turn your back on a lion to run away. It will see you as a fleeing animal and chase you down. Instead, stand your ground, shout, and act forcefully. If you are lucky, the lion will lose its nerve and back off. As it does so, begin moving slowly backwards while keeping eye contact with it. If it charges again, shout and act forcefully once more. Move to the nearest tree, as this will provide a barrier between you and it. Throwing stones at it may also stop it in its tracks. You are in desperate times here, and desperate times call for desperate measures. 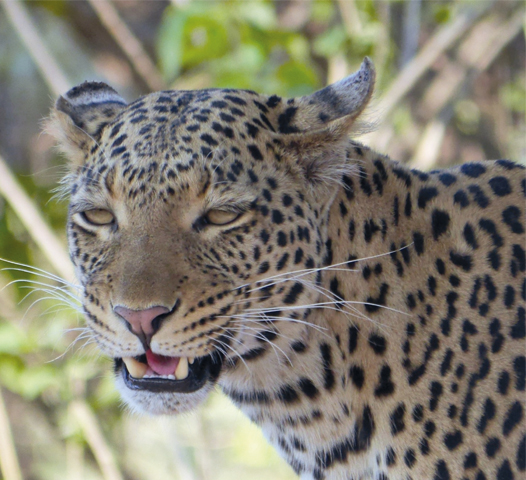 Of the Big Five, the leopard is the one animal that most people hope to see. Leopards are shy and wary of humans, but, as with any animal, if a leopard feels threatened, is wounded, or is a female with cubs nearby, it takes on a very different personality. If confronted by a leopard, retreat slowly. Unlike in confrontations with other animals, you should move sideways rather than backwards. Avoid eye contact, as this can wind one up even more, and, as with lion, NEVER turn your back on one.

A leopard crouching down and moving slowly towards you while staring at you intently is in full attack mode. Heed that warning; this is not a pussycat playing games. Once committed to an attack, it will continue until it kills you. A charge is usually instigated from close range and accompanied by cat-like spitting and growling, and coughing. 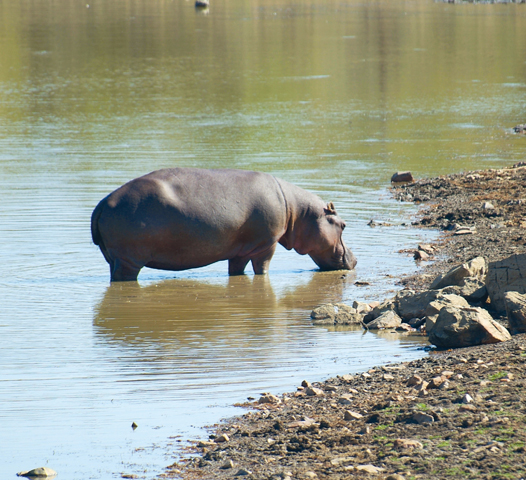 Statistics show that hippos kill more people than any other large land animal in Africa, and they are renowned for overturning small boats and canoes. Approach too close, and a hippo is liable to charge. Females with calves can be particularly tetchy. There’s not much you can do to stop a charging hippo − shouting and waving your arms won’t work. The only thing you can do is to get behind the nearest tree or rock pronto, to get out its way. Also be aware that hippos can travel long distances overland from one watering hole to another, particularly in times of drought; don’t be surprised if you encounter one in the bush. 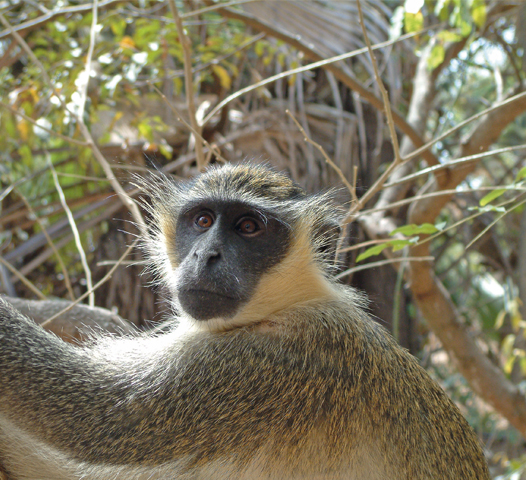 Monkeys, those bothersome pests in camps, will steal just about anything edible that’s not securely locked away. Fortunately, most are quite timid, and will avoid human contact. If they do approach, shouting and waving of your arms will be enough to see them off. Be careful not to corner a monkey, as it will become extremely dangerous.

Never stare a monkey in the eye, as this is just asking for trouble. And, NEVER repeatedly raise and lower your eyebrows at a monkey – that’s like showing a red rag to a bull. Do not underestimate any primate; most have very large teeth and can inflict severe wounds. Fortunately, most are intelligent enough to know when to back off.

Those big tusks can do you some damage, and a cornered warthog is a very dangerous animal indeed. Fortunately they are quite skittish and will move away when ‘shooed off’. 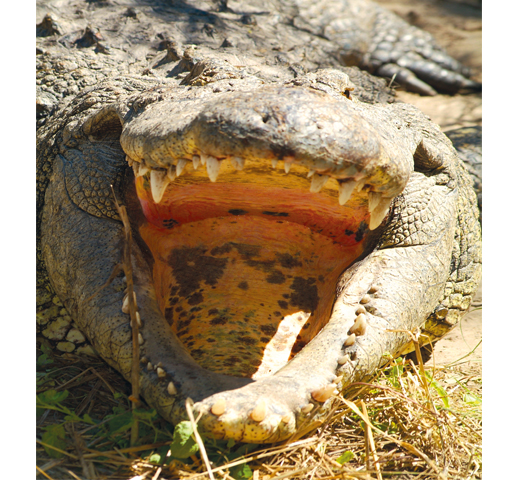 Crocodiles are ambush predators and are dangerous only if you approach the water’s edge (they make no distinction between you and a zebra for lunch), or go swimming in the river. Be careful if camping near a river which is inhabited by crocodiles, as they can learn routines; avoid doing a task at the same time and place each day.

If you are grabbed by a crocodile, it will try to drag you underwater to drown you. The best way of releasing yourself is to thrust your free arm or something down its throat, to open the valve that shuts off the airway. As water enters its lungs, it will release its grip, giving you a moment to break free and swim ashore. Alternatively, punch it squarely on the snout or poke it in the eyes. 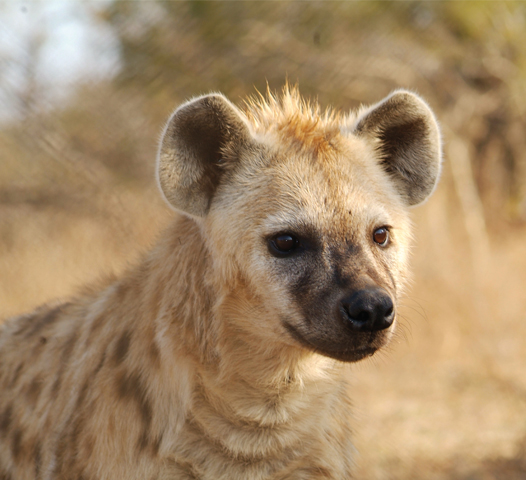 Hyenas are, by and large, scavengers; and, although there are accounts of people being attacked by them, these occurrences are rare. Fend them off with stones and sticks. Never keep food, particularly meat, in a tent where you are sleeping. If you are camping in a tent, it is best to use the bear bag method of hanging food in a tree.

Antelope, wildebeest, giraffe, zebra, etc. can be approached quite closely before they scatter. They tend to be quite predictable in that they will run away from you, rather than towards you. Even when calves are present, they do not charge you. Giraffe are one of the most captivating of animals and will allow you to approach quite closely. Although none of these animals is considered dangerous, they should still be given respect.

One should also be wary of dogs. However friendly they may appear, do not attempt to pat them: they could be carrying rabies.

In our times in the bush, we are out to enjoy wildlife − and to watch rather than confront. Give animals their space, be aware that you are on their home turf, and modify your behaviour accordingly. However, if you do have a surprise encounter, note that we all have built-in survival instincts which naturally come into play in times of confrontation, so don’t be afraid to use them. Do what it takes to survive.