In order to get properly off the grid for a few days, reader Rob Thompson needed to build a suitable solar power system that would meet the power draw needs of his family. This is his experience…

As a family we are keen campers and have been working on our camping setup over many years. We started in a second-hand canvas tent, progressed to a new canvas dome tent with extension and gazebo, and about four years ago purchased a used Imagine Comfortvan off-road caravan. The Comfortvan not only brought a new level of ‘luxury’, it also offered independence as we had onboard batteries, water tanks, and a bathroom.

One of our dreams was to be able to stay multiple nights ‘off the grid’ at a campsite of our choice. However, this was going to require the addition of some form of power generation source. Since we already ran our home off solar power I decided to go the solar route and purchased a second battery, a solar charger, and two 85W glass solar panels. This basic system was enough to meet our power needs at many local destinations – our favourite being Tsendze campsite in the Kruger National Park.

Having solar panels means you can leave them connected to charge the batteries when the caravan is parked for up to six months without use. The push I needed to upgrade our fairly basic system came earlier this year when I was preparing for a two-week trip to Botswana. I discovered that one of the glass solar panels had been damaged, forcing me to find a hardier, higher-output alternative.

When selecting new solar panels I was keen to improve in a two main areas: weight and efficiency. The glass polycrystalline panels we used previously were heavy at around 9kg each, and their lower efficiency meant that on overcast days the power generated was often well below our power draws. It also meant we needed to keep re-aligning the panels throughout the day to make the most of the moving sun. Since we have been running our home for some years using 12 high efficiency monocrystalline solar panels manufactured by SunPower, I decided to see what portable panels this supplier had available. I found they manufactured a range of semi-flexible monocrystalline panels, which were both light and highly efficient, aimed mainly at demanding marine uses. The 100W version of their panel weighs 2kg and had an efficiency of 23% versus 17% in our previous panels. I was very lucky that I was able to source panels from SunPower UK who had two 100W panels in Cape Town that were being evaluated, but were no longer required. I snapped them up as they were exactly what I had been looking for.

These semi-flexible panels were going to need a frame to mount on as they were designed to fit flush to the roofs of yachts and motorhomes. I decided to make my own folding frame using square aluminium tubing and plastic ConnectIT components, both of which I purchased from Maizey Plastics. They even cut the aluminium tubing to the lengths I specified. I enlisted the help of our seven-year-old son Liam and in an afternoon we had made a folding frame that could be propped on hinged legs, providing a movable mount for the panels. The combined weight of the panels and frames was just 8kg, a huge win as this was less than even one of the previous glass panels. To finish my new kit off, I had a bag manufactured by our local canvas tent manufacturer to protect the panels when they are being stored and transported.

Because these new panels generate a higher voltage per panel, our cheaper PWM (Pulse Width Modulation) solar charger was not able to modify the voltage from the panels according to what the batteries require; it simply discards any additional power to achieve the required voltage. So even though our panels could generate 200W of power, we could not harness the power unless we upgraded to a MPPT (Maximum Power Point Tracker) solar charge controller. This controller has the ability to reduce the voltage from the panels to what is needed by the batteries and convert the additional voltage to current, which then charges the batteries faster. This is why MPPT chargers claim to be 30% more efficient than PWM chargers. 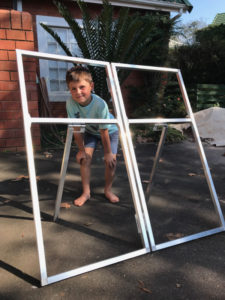 I eventually selected a Victron SmartSolar charge controller as it has built-in Bluetooth and an app that you download to your smartphone, which allows you to configure and monitor the charge controller. This is a useful feature as the controller is mounted under the bed in our caravan, so checking charge values is not easy. What is also nice is that firmware updates for the controller are downloaded and installed via your phone, meaning the controller is always up to date. When everything was connected and the panels were correctly aligned to the sun, we quickly got 171W at 9:09am, which saw 12 amps of charge going into the test batteries. This was a great result.

The next step was a more thorough testing of the system. I wanted to check the impact of shade on the power generated by the panels, as even a small leaf casting shade onto a portion of a panel can drop the power considerably. What I noticed was that when there was shade over one of the panels the power did not drop by half – as I had expected – it dropped to almost zero. This was not what had happened on the previous setup. I then read up a bit more and realised that connecting the two panels in series was not a good idea. When I changed the two panels to be connected in parallel, even if one panel was completely covered the other panel continued to generate power at its full potential – a much better result.

One advantage of having solar panels on a frame versus mounted on the roof of your caravan is that you can set up camp in the shade and place the panels in the sun. To do that you need a long cable. Typically 10 meters is a good length as with anything longer the cable losses start to become significant. I sourced some 6mm cable and added Brad Harrison plugs to each end. One end plugs onto a connector on the panels and the other into the side of the caravan, which runs to the Victron charger. I added a Flexy Tie over the cable before crimping the connector on one side to keep the cable tidy when it’s stored.

With the new system working as expected I wanted to make sure that the existing batteries were still in good condition before heading into Botswana for two weeks with no electricity as a backup. To do this I connected the caravan to the mains for a few days where the C-Tek 10A smart charger did its job of fully charging the two batteries. I then took the caravan to the local battery shop, where I disconnected the parallel links and had the batteries individually tested. Both batteries were in excellent condition even though they were over three years old, which can probably be attributed to having left the solar panels connected while the caravan was stored.

As a final test I loaded up the fridge and freezer with water bottles and ran the system for a few days to make sure the fridge was running as expected, and all connections were good – everything worked perfectly. Next stop, Botswana!