Water is the most abundant substance on earth, and essential to all forms of life. If you run out of water, and cannot locate a source, in some situations the consequences can become dire very quickly. Fortunately, wildlife can give us a few pointers on how to find it.

Animals can be categorised into three groups, based on their water reliance: ‘non-dependent’, ‘less-dependent’ and ‘dependent’. Although it is impossible to cover the dependency needs of every animal species, this overview points out a few which are reliable, and a few which are not. Some animals may not necessarily use water for drinking, but may use it as part of their breeding cycle.

In my experience, if there are insects about, water is generally not too far away. Mason wasps and Mud dauber wasps require mud balls to build their nests. These nests are never far from a water source − perhaps no further than a kilometre. The wasps almost always take water from the edges of ponds and lakes. If you see these wasps either building a nest or carrying a ball of mud in their mouths, then you can be pretty sure water is not too far away. 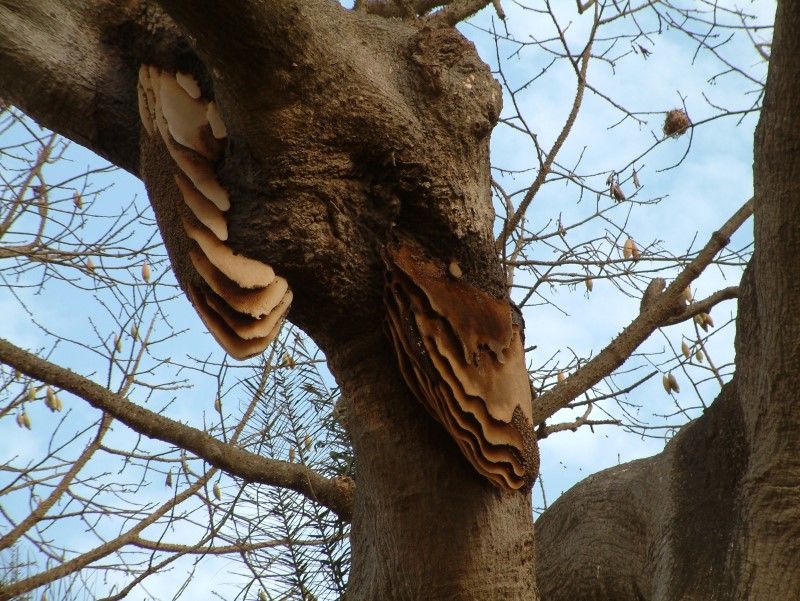 Other insects which are seldom found far from water are bees. Very rarely will you find a hive of wild bees more than five or six kilometres from a water source.

Depending on the species, (and generally, the larger they are, the better), a trail of ants will often lead you to a source of water. Don’t expect it to be a lake, though – it is more likely to be a small amount of water in the forked branch of a tree. Also, don’t assume that every trail of ants leads to water; many ants don’t form permanent homes, and are simply moving house.

A large gathering of flies can indicate fresh animal-droppings, or the animal itself. Be aware that dragonflies can occur several kilometres away from water, despite needing it to lay their eggs in. 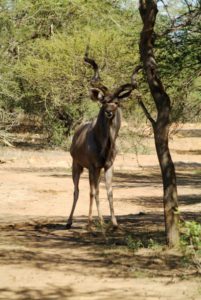 Kudu are less reliant on water than cattle

All mammals require water; even carnivores must drink at some time or other. Mammals can be used to locate water at any time of the day, although most seek water around midafternoon. Be aware that some will travel great distances between watering holes. Elephants have a keenly developed sense of smell and can detect water from several kilometres away. They also have good memories, and remember where watering holes are. Unfortunately, although they can drink up to 100 litres of water at a time, an elephant can go days before it needs to drink again, during which time they can cover vast distances. The Namibian desert elephants can go weeks or months without taking in liquid.

An interesting fact that many may not know, is that hippos are so reliant upon water that if the pond they are in begins to dry up, they may wander for kilometres through the bush until they find another.

A quick guide to the good, not-so-good and the bad when it comes to associating a species or group of species with nearby water:

Because birds have no sweat glands, many are less dependent on water. Ostrich, for example, can go long periods without water, relying for their liquid intake on water from the plants that they eat.

Flesh eaters such as vultures, birds of prey, and crows derive a lot of their water requirements from the carcases they feed on.

Other less reliable indicators are insectivorous birds, cockatoos, parrots, game birds, nectar feeders, and those which feed on nuts.

The manner in which a bird is flying can also tell us in which direction we should be going to find water. Birds flying low and fast are flying towards water. Those moving from tree to tree are returning from it − the water they have taken on board has made them heavy and vulnerable to predators, so they are making use of the trees to return to communal roosting sites.

Just before dusk is generally the best time to begin using birds as water beacons.

Many birds, such as geese and flamingos, are intensely noisy and can be heard over considerable distances. True waterfowl also feed in or near a lake or pond, and reliably visit the water every day. Also be on the lookout for birds associated with cattle and buffalo − such as cattle egrets and oxpeckers − which must drink every day.

A large amount of a reptile’s water requirements is met by its dietary intake, so reptiles are not reliable indicators of water. That being said, the lives of a number of species do revolve around water – such as water snakes, a number of species of monitor lizard, turtles/terrapins, and crocodiles. We should also not forget frogs, which are extremely water dependent.

Nature shows us things all the time. However, understanding the various signals is like reading a book: the information is all there, as long as you can understand the language.