My brother Paul climbs gingerly out of our Defender; it’s cold up here and we’ve reached the turnaround point – the lookout point just below Conical Peak. Straight away he bends down to grab a handful of snow – it’s his first time in the stuff . He has the eyes of an excited kid. 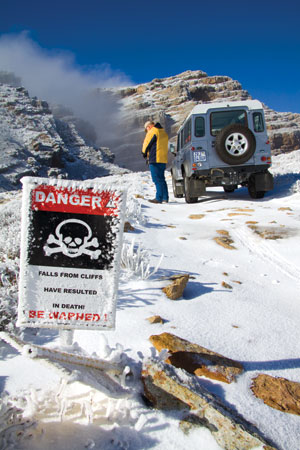 I’m one of three brothers so I know what’s coming next, I break into a run to get out of firing distance. My heavy boots break through the so crust of the new snow and hits the slippery ice underneath. My run becomes a slide but I manage to steady myself and avoid falling. A nearby sign reminds me that others haven’t been so lucky – people have slipped and fallen to their deaths over the cliffs at this very same area.

Words and pictures by Patrick Cruywagen

It’s white everywhere. The little vegetation that grows up here hasn’t escaped the whiteness; it reminds me of the coral reefs you see when diving, except there’s no colour. The only break in this monotone palette is our blue Defender and the blue sky. Suddenly a white cloud comes over the Matroosberg Peak which towers above at 2 249 metres. It starts to cover the road which loops up towards the peak and makes its way towards us, covering all the brown and white mountains in the process. And then we’re in a whiteout. The cold that accompanies the wind tries to find a way through the layers of clothing we’re wearing; fortunately we’re dressed for the conditions – I’m even wearing ski gloves.

When signing in to do the trail we were told to drive no further than the 13 km climb to the Conical Peak lookout. When there’s snow on the ground the seven km loop to the Matroosberg peak is out of bounds as it becomes too dangerous. There’s a hiking path leading to the top of Conical Peak but in these tricky and slippery conditions neither Paul nor I fancies it, so we just play in the snow while staying well away from the cliff edges.

We spent the best part of two hours making our way up the cold, brown Matroosberg mountain. Only once we got to the higher sections did the first snow start to appear, and a few hundred metres from our turnaround point the really heavy stuff appeared. At the start of the trail we’d never imagined it would look like this.

I would later find out that we were the only people to do the trail on that day. Just us. How amazing is that? But know that on weekends when there’s snow the place can get hectically busy, during the week you could well have it all to yourself.

The actual route starts off gently and innocently, and then you get to Landy Hill. I was in low-range by this stage, and in second gear and with a little extra power we had no problems at all getting up Landy Hill. We had lowered our tyre pressure to 1.5 as this was what they’d written on our indemnity forms. The recommended tyre pressures change according to the conditions of the route. In heavy snowfall you’d run slightly lower at 1.3.

Our first stop was at the Lakenvlei lookout where one could look back over the valley. This is a nice place to have a cup of coffee if you remembered to pack the flask. Once we were back on the route I started to realise why they don’t allow so -roaders on the trail. We’d been warned not to start driving the trail too early in the morning; in the rain and snow, the long rock bed section can be slippery, it needs sun to clear it. This was the next challenge, but once again our Defender made light work of it.

After about an hour of driving we began to see the first signs of snow. The puddles of water in the road were frozen and our Defender had to literally break the ice. Once again we had to stop as it was just too beautiful not to. The driving was not too challenging but I was glad that we were in a vehicle with good ground clearance and decent tyres. There are one or two places on the route where you have to concentrate 4×4 Trail and take good lines. I tried to avoid the big holes as cross-axles used to be the Achilles heel of Defenders though with the new traction control things are a whole lot better.

Eventually we were at the top and the snow party could get started. The out-of-bounds loop did look tempting and I’m sure that it could be a whole lot of fun provided you have more than one vehicle and the right set-ups and experienced drivers. After spending an hour or so at the top we made our way down. As it was only lunchtime we drove the 4×2 route as well and made our way to the rock pools – lovely natural swimming holes which could be loads of fun in the summer. It was too cold to climb into them now and so we just drank some of the fresh water.

I still wanted to experience more of Matroosberg so I jumped onto my mountain bike and cycled some of the trails around the foot of the mountains. The place just has so much to offer. You can 4×4, bike, hike, swim, abseil, quad bike, shoot or fish!  That evening as we drove back into Cape Town, we enjoyed a beautiful sunset over the ocean. As I enjoyed a pint with my mates I showed them some of the snaps I’d taken of the snow. They couldn’t believe that I’d experienced it on the same day and just a couple of hours from Cape Town. Had I been dreaming?