Lead-acid batteries remain the industry standard for mobile and vehicle applications. Sealed lead-acid batteries, also known as VLRA (Valve Regulated Lead Acid) batteries, are now widespread because they are safer, require little or no maintenance, and cope well with the heat generated by being sited in a vehicle’s engine bay. Modern cars, and notably those using stop-go technology, have these batteries specified as original equipment.

However, the starter batteries of many vehicles are still specified as open batteries (also called ‘wet’ batteries), which require the cells to be filled with distilled water.

The C-rating on the label

VRLA batteries are manufactured according to international standards, one of which is a Discharge Rating when operating at 25 degree Centigrade. Known as the C-Rating, this is a measure (in hours) of how quickly energy can be discharged from a battery.

In other words, be sure to match the C-rating of the battery to the current draw you are likely to require.

How to prolong battery life

A lead-acid battery performs best at an ambient temperature of 25DegC. In-car and under-bonnet temperatures typically exceed this, aided by the higher external temperatures found all over Africa.

When temperatures soar to the more likely mean of 30-35DegC, battery capacity is lower than normal during discharging. When the battery is recharged, the extra heat will accelerate the chemical process, and on sealed batteries the safety vents will release oxygen and hydrogen gas – which are highly explosive and have an acid smell. If the safety valves do not open, the battery will bulge. 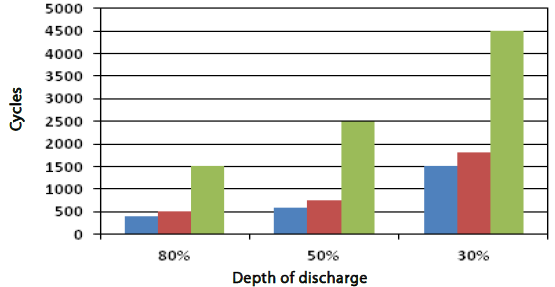 If a battery is left in a discharged state, plate corrosion will occur. It is essential that the battery charger utilised is able to compensate for the higher temperatures by reducing the charging voltage (and the danger of over-gassing and premature battery failure).

Monitoring the temperature and charge status of your batteries, and being able to compensate for changes, is vital to ensuring the expected life cycles can be achieved.

Voltage rise as a battery is charged and conversely lowers as it is discharged. As a battery becomes weaker the internal resistance rises, which has a direct effect on discharge voltage. The faster the discharge (ie with high power draws), the quicker the voltage lowers, and vice versa. Therefore, using voltage as an indicator of the state of the battery is not accurate.

A better method is to use an Amp/Hour meter. This device takes the current being charged or discharged into account, as well as the voltage, and displays the A/h status and also the State of Charge (SOC).

A voltage indicator can only be used to tell whether a battery should be charged when it is at rest – that is, there is no load and no charger is connected. Note that a 12 Volt battery can be below 50% SOC when the voltage indicator shows 12V, while a fully charged battery will usually indicate 12.9-13.2V.

In the battery monitoring article last month (SA4x4 Feb 2019, page 86), we mentioned that the constant voltage stage in the charging process (the absorption phase) can be a lengthy one in excess of 3-5 hours, during which the battery cells are balanced, usually at 14.4V. Taking a reading during this phase with a battery voltage indicator would show that a full voltage has been reached – which would lead one to believe the battery is full when it is not.

Each battery is designed for a certain purpose. In vehicle applications it is cycle service use. A cycle is when the battery is discharged to a set level and re-charged back to 100%.

The Depth of Discharge does not matter as long as a full charge is done within 3-6 days after the discharge. Most manufacturers publish certain levels of discharge (see Figure 1), with a higher discharge depth affecting the number of cycles a battery is able to provide.

Sometimes a battery can be discharged over two days before receiving a charge again. Some batteries are only used a few times a year, though one should bear in mind that a lead-acid battery will self-discharge at a rate of 4-6% of capacity every month.

Victron recommends that a stationary battery is fully charged every month to prevent premature failure due to sulfation of the internal plates. Batteries that are used more often should be fully charged once a week. Here, an Amp Hour monitor is ideal to ensure the battery is 100%.

Victron Energy manufactures only deep cycle batteries. The range comprises five types of lead-acid battery, each with a different construction. The AGM and Gel types are long-standing products, and these have been supplemented by the new-tech Super cycle AGM and Lead Carbon batteries which provide even more rugged performance.

All Victron battery chargers are preset to charge Victron batteries. The new Super Cycle AGM and Lead Carbon battery types allow deeper discharges and quicker re-charges due to their chemical construction. Victron Energy offers a two-year warranty on its batteries when an approved battery monitor is installed with the battery.