Back in the early 1980s, BF Goodrich introduced an unconventional tyre that would forever change the way we thought about off-road traction. They called it the T/A Mud-Terrain: “T/A” borrowed from their successful line of street-performance offerings, and the rest for the type of terrain it would call home. It was the first such tyre with an aggressive tread design, deep voids, and radial construction.

The impact was such that, in the following years, nearly every tyre manufacturer in the genre would introduce a variant of BFG’s original design. In 1984, the company rocked the four-wheel drive community with a 35-inch version: a massive tyre for the time. This new ‘miracle’ tyre provided extra ground clearance, and, at low air pressure, its soft sidewall deformed like a warm marshmallow. However, we also found to be susceptible to pinching, tearing and punctures.

During the following decades, the tyre underwent several revisions, ultimately appearing as the KM2 in 2007. With technology moving at light-speed, the company’s engineers went back to the drawing board, to CAD systems, and to chemists, and spent the last six years developing the fifth-generation T/A Mud-Terrain: the KM3.

We recently tested the KM3 in the Victoria Highlands, Australia, on terrain ranging from high-speed gravel tweespoor and dry granite, to soft sand, moderate mud, and windy-mountain tarmac.

Because many of our miles are spent driving to and from the trail, noise, vibration, and harshness (NVH − a tough nut to crack for an aggressive tire) should be weighted heavily when selecting a tyre. Noise is primarily the affect of voids in the tread block creating turbulent air – the larger the void, the more the turbulence.  A tire’s roundness (or lack thereof) and carcass-design are a major contributor to vibration and harshness. In addition to core construction, other contributing factors are how true the mould casting is, and how equal is the distribution of material during the moulding process and post-production trimming. If done well, the tire will be round. If combined with the proper rubber compound, it will be more predictable, and track better.

I found the KM3 to be surprisingly quiet at speed (for a mud terrain) and it demonstrated a high degree of lateral grip during hard cornering. In emergency-braking scenarios on dry pavement, tyre chirp (a common attribute of aggressive tires) was minimal. 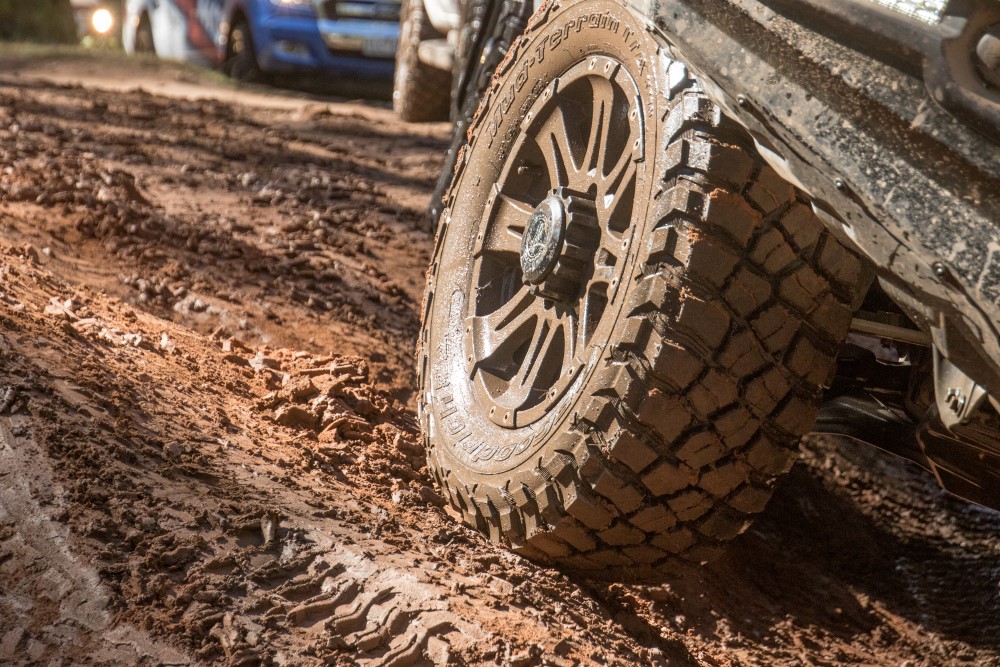 If you are going to hit a rock or any fixed object at speed, the general rule in desert racing is to place it squarely on the centre of the tyre because the tread block is more resilient to harsh impact than the softer sidewall. But stuff happens, and when you do clip a sidewall or pinch it in low-pressure situations, it needs to be tough.

As with the KO2 All-Terrain, the KM3 utilises CoreGard Max, a 3-ply sidewall design and rubber compound borrowed from its brethren, the Baja champion KR3. This technology has proved to be considerably more resistant to splitting and punctures — BFG claims a 27 percent tougher sidewall than the KM2.

The first testing phase included high-speed racing in Polaris UTVs on a short-course track. While it was heaps of fun and the tyres seemed to do well, UTVs are not my area of expertise. I find a better evaluation to be had in a four-wheel drive in a variety of conditions. Phase II was traversing several hundred kilometres of hard-pack mountain roads with sections of moderate corrugations, loose rocks, and steep, dry granite.

With stability control disengaged, step-out (or side skip) on corrugations was limited, and lateral grip while drifting through fast, smooth corners was positive. I felt traction and deformation in slow technical terrain was good, considering that we were running 1.8 bar pressure – I would normally run less. These performance attributes are a reflection of the new Krawl-TEK rubber cocktail, carcass construction, and linear flex zones in the tread block, deemed Terrain-Attack. Notwithstanding cool buzzwords, the KM3 performed well in each scenario.

I would have liked to put the KM3s through more mud, the bottomless soupy type, but we did find areas of moderate mud and sand.

The shoulder has been redesigned, now wrapping further onto the sidewall in an aggressive directional pattern the company calls “Traction Armor Sidewall Sculpture”. With the addition of “mud-phobic” bars (apparently they hate mud) placed squarely in the outer voids, the tyre was effective at biting the sides of trenches, clearing debris, and providing additional forward force. Sand flotation was reasonable, considering the tyre size (LT 265/70 R17), the weight of the Ford Ranger/Everest test platform, and the aforementioned pressure. I feel that at reduced pressure, the KM3 will squat to form a desirable ‘inverted-mushroom’ footprint, and do fairly well in soft sand. 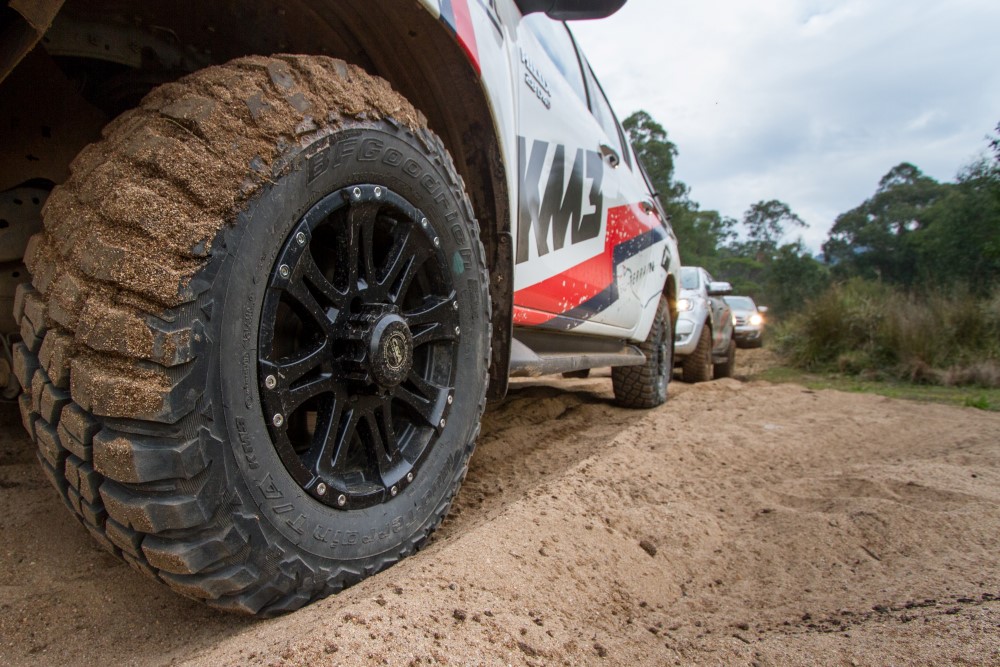 Overall, I think the six years BFG invested in the development of the KM3 has paid off. Their 45 years of desert racing experience has provided proper insights about the abuse a tyre will receive, and how to address various challenges. They’ve improved upon an already good tyre, addressing traction and sidewall-toughness while enhancing on-road manners.

The KM3 will hit South African retailers from September 2018, in various sizes to fit 15-inch to 20-inch rims. Pricing will be available closer to the release date.