Mention the word jack and what usually comes to mind, in the 4×4 context, is the hydraulic bottle jack or scissor jack that your vehicle is supplied with from the factory.

However, when it comes to vehicle recoveries, the standard jack is very limited. If your vehicle is fitted with a lifted aftermarket suspension, that standard jack will simply not be able to lift the wheel off the ground if you have a puncture or some other wheel/tyre issue. It does not have enough travel. Quite frankly, even with standard tyres and suspension, a typical OE bottle jack is short on travel – just look at the images on this page using the OE jack to change the wheel of a (stock standard) 200 Series Land Cruiser. You will typically need to jack up in increments, using additional supports, like blocks of wood or stones. The same goes for OE scissor jacks – often they are not rated to carry a fully-loaded vehicle, though one can purchase heavier-duty items.

So, how to overcome an issue that could become a major problem when you need to change a tyre in the bush or want to lift the vehicle out of where it is stuck. There are two well-known options, with ARB recently adding a third option into the equation. 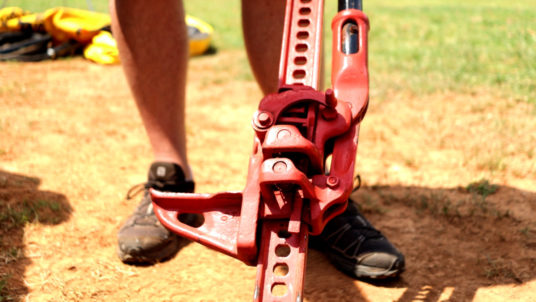 Hi-Lift/Farm jack
This is probably one of the most often sold pieces of equipment, which you will find mounted on almost any 4×4 – often in unlikely places (and also quite often with rust-seized fixing bolts). The sight of this heavy piece of equipment bolted to the side of a vehicle (it weighs around 14kg) somehow portrays the image of the ultimate ‘Camel Trophy’ guy.

Strange thing is, though it’s probably the most common aftermarket jack you will find on a 4×4, if you ask the owner if they know how to use it correctly, 90% have never tried.

As handy and versatile as it can be, it also has the potential to cause serious damage and injury when used incorrectly.

Just like any other tool, a hi-lift jack has its pros and cons. Most 4×4 enthusiasts believe that the pros far outweigh the cons. It is one of the most versatile pieces of equipment you can invest it. It can be used to lift heavy objects – as a mechanical winch – and to lift your vehicle in tricky situations in order to place traction aids underneath the wheels for better traction. They can be used to de-bead a tyre off the rim for repairs, to shift a tree or stone that’s blocking the road, and many other uses.

Ideally, though, you don’t want to use a hi-lift jack to change a tyre, the reason being that the base of it is very narrow. This causes it to be unstable and the slightest bump could cause the jack to move, resulting in the car falling off the jack. Should you have no other choice, at the very least make sure you place the spare wheel under the car just in case the jack slips.

When using a hi-lift/farm jack, make sure it stands on level, firm ground to start with. Should you find yourself in mud or sand, a proper base plate is needed to ensure the jack doesn’t push into the ground. Ideally, you want to spread the weight as evenly as you can. Also, make sure that the wheels are chocked so the vehicle doesn’t roll off the jack. In addition, always wear gloves when using a hi-lift jack and keep your fingers out of the way!

Since hi-lift jacks are mechanical tools, able to carry a heavy load, you need to exercise extreme caution when using them. Know exactly all the stages of their operation and stand clear of the lifting mechanism. Accidents can and will happen.

Another key thing about using a hi-lift jack for recoveries is that unless you own a Defender you are going to have to make certain modifications to your vehicle. Dedicated hi-lift jacking points need to be fitted to your 4×4, which normally come as part of the design when you fit aftermarket front and rear bumpers, or rock sliders. These will not always fit the standard hi-lift jack’s square lifting face and you might, in addition, need to purchase a sturdy pin that does fit.

If you have purchased one of these jacks please make sure you receive the correct training in the use of it. 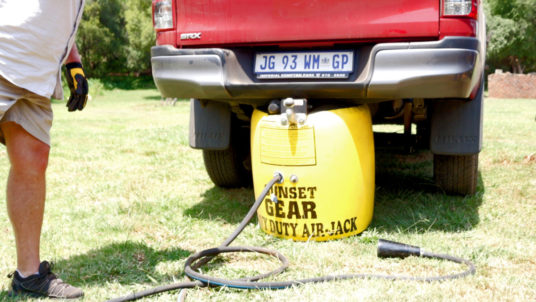 Air jacks have been around for a very long time, in various guises. Modern-day 4x4s and SUVs don’t have jacking points suitable for a hi-lift jack, and you certainly can’t use the standard bumpers, nor can one access the chassis.

The alternative is an air jack. These are essentially reinforced vinyl bags, made in the same way as a pontoon for an inflatable rubber duck, which is inflated using either the exhaust for rapid inflation using bulk air or (in the better examples) a valve suitable for use with a compressor. You would use a compressor to inflate when you need slow, controlled inflation or if a vehicle has twin exhausts.

Just as in the case of hi-lift jacks, there are advantages and disadvantages.

The big footprint of an air jack ensures that the jack remains stable and won’t sink into soft sand or mud. Using the exhaust for bulk air, one can achieve very rapid inflation and vehicle lift. Air jacks can lift up to four tons with less than one bar of air pressure.

Be aware that when the vehicle is lifted it remains unstable on an air jack. Be sure, again, to chock the wheels to ensure the vehicle does not move in a direction you did not anticipate.

One disadvantage is that the bags can be punctured by thorns or sharp edges under the vehicle and they must be kept away from vehicle heat sources (such as exhausts). Most jacks are supplied with extra protective surface top and bottom, and, in addition, you can use the rubber mats from the vehicle to provide another layer to guard against damage.

Another factor is that air jacks tend to be bulky and packing space might be an issue for some. Personally, I would rather make use of an air jack before I use a hi-lift jack. 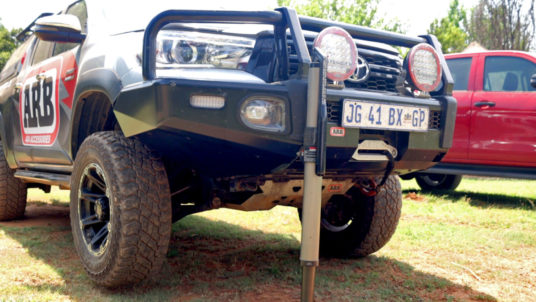 An innovative product from ARB is a new long-travel hydraulic lifter, which is called ‘Jack’. Its ease of operation is astounding; even a kid would be able to jack up a heavy 4×4 vehicle.

What makes it so safe is that it eliminates the ‘kick-back’ one can experience with the handle of a hi-lift jack under load, plus the base of the jack is a lot broader, ensuring more stability.

To lower the vehicle the jack is equipped with a simple release mechanism which allows one to easily control the rate of lowering. It still requires dedicated jacking points, it’s rather pricy, and must be stored upright, but it scores highly in terms of lifting effort and safety. A winner, compared to the traditional hi-lift, in my opinion. 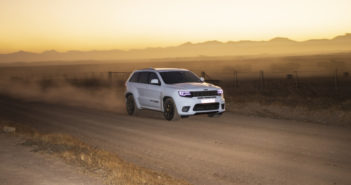