I have always been mildly obsessed by rocks of all kinds. Apart from the purported ‘New Age’ healing qualities of some of them (particularly quartz crystals), I just love the way they look and feel in my hands. But they also contain detailed stories of how the landscape in which they were found was formed. 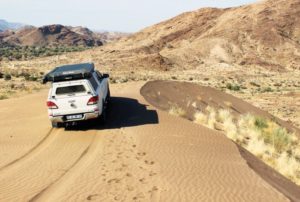 A man who knows this better than most is Kobus Van Coppenhagen, our host at Daberas Guest Farm − a conservation area and veritable treasure chest of geomorphic wonders on the western border of the Augrabies National Park.

“Here’s a good example of how various types of rock come together in one place,” said Kobus at one of our numerous stops in the sandy riverbed we were driving through — the Kwaaiputs se Loop. “You can clearly see how the white gneiss at the bottom here has been overlaid with this kinzigite rock, and then above that you see a different rock layer: an igneous rock called grey granite. One of the interesting things about this kinzigite is all the garnet embedded in it; see − they look like rosyntjies in a rosyntjiekoek!”

Daberas Guest Farm, formerly known as Daberas Adventures, now focuses mainly on ecotourism, and more specifically what Kobus calls ‘Geo-tourism’. And, although you can choose to be left completely to your own devices at either of the two guest cottages or campsite and can drive the engaging 4×4 track on your own, the guided sand dune driving at Vaalsand as well as the half-day guided ‘Geo-tour’ around the farm (it includes parts of the neighbouring national park and sundowners at the Swartberg view site) are both a must. 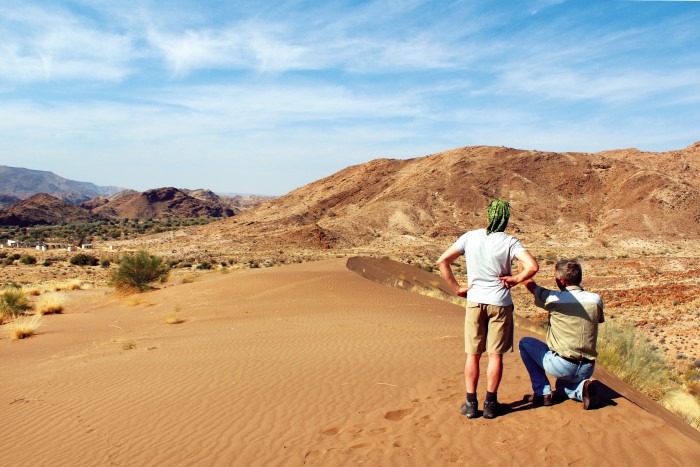 Foot before rubber is always a good idea — David Lowe and Kobus van Coppenhagen take stock of the best angle of approach to tackle this dune.

My travelling companion, David Lowe, and I had arrived late the previous afternoon. After a brief rundown on the lie of the land, Kobus led us to the Outpost Campsite. I’d deflated the tyres of our Mazda BT-50 a little before taking the Nous dirt road in from Pofadder, but − judging by the thick sand we drove through on the way to the campsite − more deflating was necessary.

En route, we had our first small 4×4 challenge: at a point called the Noute, where the riverbed winds its way through a narrow kloof, we needed to conquer a large, angled boulder. When we arrived at the epically situated campsite, we were introduced to its modern facilities − which included flushing porcelain loos, hot showers, a shaded foodprep area, and a selection of fire pits and braai facilities to choose from. 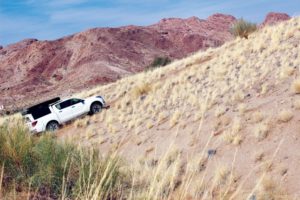 The writer’s first attempt at scrambling up a 45° dune was unsuccessful; but he got there eventually!

David’s bladder had him up a few times that night, and (perched as he was in the ready-pitched dome tent on a raised concrete plinth some way from the loo), he confessed the next morning that he’d been a bit wary of an encounter with one of the occasional wandering leopards that Kobus and his wife, Hannecke, had told us about after we’d arrived.

Our plan the next day was to ride behind Kobus for most of the morning and early afternoon, go back to camp for a spot of lunch and a mini-siesta, and then complete the 20- odd km 4×4 track in the mid-to-late afternoon. But we were seduced by Kobus’s professional coffee-making skills and Hannecke’s hospitality when we rendezvoused with them the next morning, and were engaged by the thorough VHF radio-guided ‘Geo-tour’ that followed. So, by the time we arrived at our driving date with the Vaalsand dunes, it was already mid-afternoon.

With no real dune-driving experience behind me, I was somewhat beguiled by the grass-covered slopes and it wasn’t until I stepped out of the Mazda in the soft sand at the top of the first small dune that I realised I had a serious challenge ahead of me. 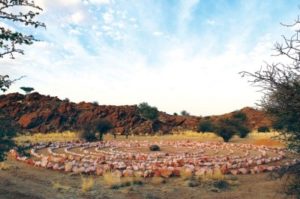 The Outpost Campsite on Daberas Guest Farm has seven sites, modern ablution facilities and even a rose quartz labyrinth.

“Okay, Nick, so what I want you to do is go into low range, turn the A/C off, put difflock on, and, when I tell you to, just floor the accelerator and head straight up that rise there, jiggling the wheel back and forth slightly to increase traction.”

It sounded simple enough, but we had to make it through a small bumpy depression first − and after I’d extracted my cranium from the roof lining, I hung onto the wheel for dear life as the big turbo-diesel roared and the tent-laden bakkie scrambled its way up the dune.

Well, let’s just say I very nearly made it up the first and second times, and it was only when we picked a slightly less steep attack angle that I made it on my third attempt. I was quick to realise why Kobus called this ascent “Ambush Hill”; it’s because you see only about half of the challenge from the bottom, tempting you to take your foot off the gas as you crest the rise.

On a beach-sand driving trail a number of years ago, I’d been instructed to remain in high-range (low-range can sometimes dig you in, I was told) and keep my speed up. But this sand was not as fine as the beach sand, and here flooring it in second low-range and then quickly changing to third gear seemed to eventually get us over the hump. It was exhilarating stuff. 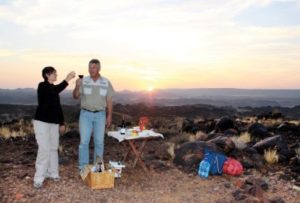 Of course, my tyre pressure hadn’t been optimum either, as I knew we were going to be doing some rocky stuff later – and, afraid of puncturing my sidewalls, I had left the pressures at 1.25 bar and not the 1 bar recommended for dune driving.

Coming down the dune seemed even more daunting. Facing a 45 degree slope of about 100 metres of traction-less sand, I was glad to have Kobus next to me in the passenger seat; yet I wasn’t that excited about David at the bottom with his finger on my camera’s multiple exposure trigger, ready to record any spectacular fails I might make.

But, once again, the BT-50 performed well and clawed its way down the dune without much trouble at all. Aft er much high-fiving, Kobus announced that the dune challenges weren’t quite over yet, and we set off to conquer the next obstacle before heading down to the Gariep for some rest and respite along the water’s edge.

Going back to Kobus and Hannecke’s house via another route through the park, we saw a fair amount of game, including giraffe, kudu, zebra and hartebeest. Any remaining thoughts of being able to complete the self-drive 4×4 track that afternoon were scuppered when we heard Kobus ask Hannecke over the radio to prepare some drinks and snacks for a sundowner visit to the Swartberg view site later.

What we may have missed on the self-drive 4×4 trail, though, (previous accounts say the ascent to Aubrey’s View Point is the most engaging — around a Grade 3-4) was more than made up for by the surreal and otherworldly view we enjoyed from the Swartberg beacon that evening. Th is was a 360° panorama of layer upon layer of bouldertopped peaks, bathed in the yellow and cerise light of a classic Northern Cape sunset.

And, besides, the Grade 2-3 drive to get there – through fields of glittering rose quartz and angled rocky slopes – is part of the self-drive 4×4 track, so we felt we’d earned the right to raise a glass or two. 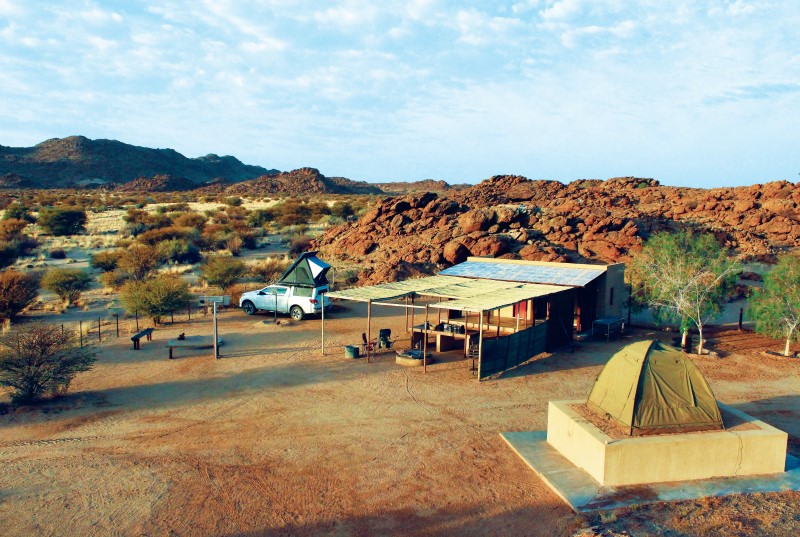 From Johannesburg and Pretoria, head south-west on the N14 and take the R359 to Augrabies 10km past Kakamas. After about 26km, turn left onto a dirt road and drive for around 40km before turning right at the Daberas Farm sign. From Cape Town, head for Springbok on the N7 and then for Pofadder on the N14. About 56km east of Pofadder, take the Nous dirt road left and travel for 46km before reaching the Daberas signboard on a right-angled bend.

Opening times: All year, except if the Kwaaiput se Loop is in flood.
Terrain: Sandy riverbeds, dunes (optional), rocky gradients (a few steep ones) with some loose scree slopes.
Grading: 2-4
Distances: The self-drive 4×4 trail is about 20km long (some of the more difficult sections can be avoided by using escape routes), but we covered around twice that distance following Kobus on various guided routes around the farm, on right-of-ways in the Augrabies National Park, and on the dunes.
Will I get lost? No, the map provided for the self-drive 4×4 route is good and all the rest of the routes are guided.
Recovery facilities: Your hosts will assist wherever possible, provided they know your movements. But I advise doing the selfdrive 4×4 trail with at least two vehicles.
On-site compressor: Yes
Min/Max number of vehicles: Not applicable, but larger groups should preferably be guided or use radio comms if possible.
Time of year: All year, but call ahead in the unlikely event that the trail access is flooded.
Diff-lock: Yes, particularly for the dunes and some of the steep loose scree slopes.
Tyres: All-terrains with good sand and rock capabilities.
Minimum ground clearance: 220mm
Sand tracks: Yes
Underbody protection: Yes
Softroader-friendly? Not for the self-drive 4×4 track or dunes, but most softroaders with decent ground clearance (around 200mm) should make it to the campsite along the dry riverbed, and certainly to the guest cottages near the farmhouse.
What vehicle were we driving? Mazda BT-50 4×4 3.2-litre turbo-diesel double cab.

Some steep loose scree and rocky slopes with a few sharp turns here and there. Because there is a variety of thick sand and sharp, rocky surfaces, I would recommend taking your own compressor to enable you to vary your tyre pressures accordingly. On the dunes, follow Kobus’s instructions to the letter!

Wife and kids: Apart from the first-rate 4×4 experience, a large part of this destination’s appeal is geo-tourism and the pristine nature experience. If your wife and kids can bear to be away from the techno-sphere (there is solar power only) and are happy to chill in natural surrounds, they will thoroughly enjoy themselves here.

Camping – The spacious seven-site campsite (allotted to one group at a time) with modern ablution facilities (but no 220v electrical points) is surrounded by boulder-topped hills and acres of silence. A rose-quartz labyrinth rounds out the soulful experience. The tap water is brackish, but drinking water can be provided. Rates are R130 p.p.p.n

The Cape Ebony Lodge — This offers two luxury self-catering suites with A/C: the Safari suite sleeps 2 and is rented out at R1200 per night, and the Khoisan suite sleeps 3 and goes for R1500 per night.

Star Tree Farmhouse – this slightly more rustic self-catering farmhouse is in the process of being upgraded, and sleeps 5 people with the possibility of adding 2 extra beds. Rates: R350 p.p.p.n sharing, and extra beds are R250 per bed.

Self-drive 4×4 cost: No cost to overnight guests (no day visitors allowed), but those who want to do the Vaalsand dune driving can do this only on a guided basis at R200 per vehicle. If you want to do the half-day Geo-tour day plus an amazing sundowner experience, this will cost R250 per person.