Whether or not you have obvious damage like a puncture, it is always important to inspect your tyre after every 4×4 trip to check for cuts, chipping and sidewall damage.

Heat damage: Driving for extended periods at low pressures, such as on a long dune trip through Namibia, will cause a surprising level of heat build-up along the sidewalls of the tyre. Heat is created because the rubber, canvas and wire elements in the tyre flex and potentially delaminate. The risk here is that severe tyre damage may not be visible, as strands of tyre break within the tyre. Look for bulges and deformation. If you pump a heat-damaged tyre back up to road pressures and then reach highway speeds, you face the serious risk of a blowout. To properly inspect your tyres after a trip, they must be removed from the wheel rim at your nearest tyre shop.

Chipping/chunking: Chipping on tyres occurs when tyres are inflated too hard for the terrain − which occurs most often on sharp shale or rock surfaces. Poorly designed tyres may also chip or chunk, and I’ve seen tyres with whole knobs torn off and the canvas showing after relatively short mileage. By driving for extended periods at, or near, the load limit of the tyres, you dramatically increase your chances of chipping or chunking. 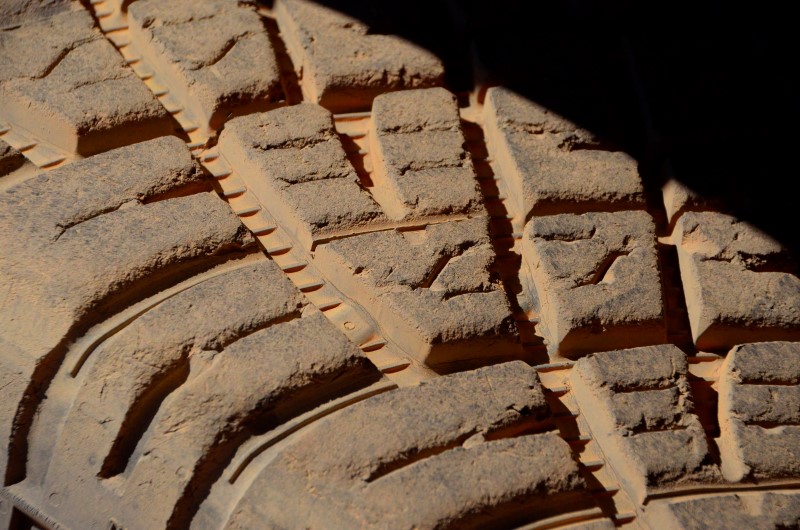 Cuts: Cuts can happen to any part of the tyre, and occur when a sharp object like a rock or a piece of steel cuts through the rubber. If a cut occurs on the tread, it may be repairable with a mushroom plug. If the hole is too big for a plug, a gator can be applied and a tube used for emergencies, until you can buy a new tyre. It is never advisable to repair sidewall damage, as this is an area of high stress and flexion. However, I have seen some interesting repairs with sticky plugs and wire stitching to effect an emergency ‘boer maak a plan’ fix. 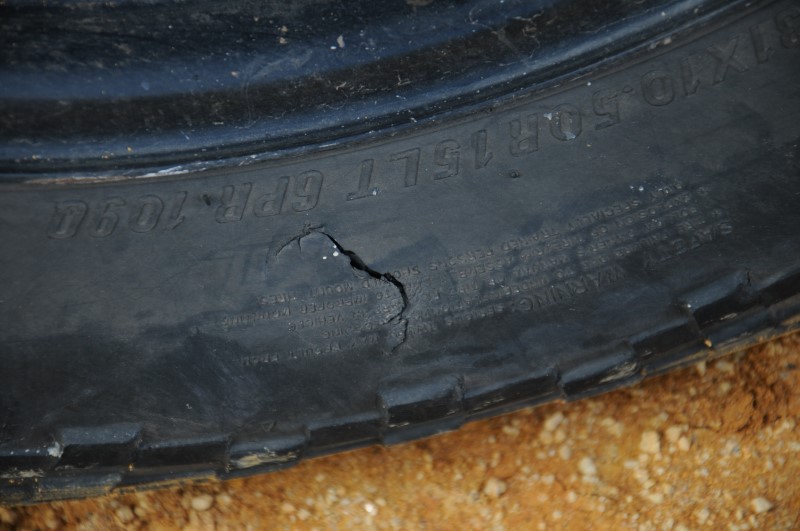 Flat spots: Though rare, flat spots can occur as a factory fault from the manufacturer, although they are mostly caused by the wheels locking at speed under harsh braking. Only the immediate contact patch will wear − which causes the tyre to be unbalanced, and creates knock-on problems with your suspension. Flat spots are not repairable, but are now rare, as most modern vehicles have ABS: anti-lock braking systems.

Debris in the wheel: Debris like sand or mud can get past the bead and enter the wheel, especially if you have popped the tyre off the rim. Debris may also be forced between the bead and rim, causing air to escape. The remedy is to jack the car up and take the tyre off the wheel to remove mud. Sand is easier to remove but requires the same method. Mud or sand inside the wheel will cause vibrations or severe and dangerous shaking on the road as the wheel goes out of balance. Mud may even set inside the wheel like concrete, becoming difficult to remove.

Did you know? Well over half of all punctures occur on the left rear tyre (in right-hand drive territories). This is due to the fact road surfaces collect debris on the left side due to their camber. The front left tyre will very often roll over debris in the road undamaged, but the rear tyre impacts with these now displaced foreign objects, causing damage.

Next month we focus on wheel alignment and how it affects handling, suspension and your tyres.