“Jeez, boet, where does the road go? It looks like it might drop right off the edge of that mountain over there,” commented my longstanding co-pilot, Lionel Williams.

We’d been in the car just over an hour, following our host’s map showing tracks marked in green (Grades 1-2) and blue (Grades 2-3). We were fast approaching the only red route (Grades 3-4) on our chosen 50km perimeter trail – the aptly named “Banggat” section, when the track suddenly fell away steeply before us.

Travelling in our borrowed Isuzu KB300 4×4 LX Extended Cab, we’d ambled along the predominantly green route from our guest house to the elevated point of “Karoopunt”, about a third of the way into the trail.

The route until that point had been a gradual ascent to the edge of the Roggeveld escarpment, following a somewhat rocky and rutted jeep track with occasional sections needing a bit more concentration; particularly some of the steep rainwater run-off humps that had our bonnet pointing skywards.

En route we sailed past the red-rated “Bojaan drive” and blue-coloured “Witkruis” sections; we would get to them the next day when we tackled the second of the two main 4×4 routes: via “Kameelkop” and “Witkruis”.

When we had arrived at the “Karoopunt” marker earlier, the breath-taking view from the edge of the escarpment reminded me of the similarly expansive and far-reaching views from the top of Ouberg Pass and Blesfontein Farm; both to the south of where we stood. Also at this point was a tempting-looking entrance gate marked “Sneeukrans 4×4”, but it was labelled with specific instructions not to enter without the owner of the farm. As we were already on an exacting trail with just one vehicle (we got special permission) and no other 4x4ers following, obedience was a no-brainer.

(We learned from the website later, that “Sneeukrans” is actually the easier of the escarpment descents and can apparently be done in a 2×4 with high ground clearance.)

Coasting along the edge of the escarpment, we noticed a sign that read “Broekskeur.” It wasn’t on the map, but it marked a tricky descent disappearing between some large boulders. We walked the section on foot and judged it to be a Grade 3 piece of track that had snuck into an innocuous-looking green section of the route. It gave us our first real chance to test our 4×4 skills, as we engaged low-range and walked the vehicle gently down the boulderencrusted slope.

With Lionel consumed with trying to get the shot as I came tumbling down the hill, I missed his co-piloting skills and got myself stuck against a large boulder on the left-hand side. But, after a few “benoude oomblikke” and some nifty reverse work, I disentangled myself and was soon edging down the slope again.

The real challenge of “Banggat” was still to come. Dropping a few hundred metres in a couple of kilometres, this scree-slope descent will make you thank the presence of low-range, a torquey diesel engine and sticky all-terrain tyres (our Isuzu was shod with General Grabbers).

Once you are on the “Skuinsvoetpad” ahead of “Banggat”, there are few opportunities to turn back, so if you decide to bail, do it well ahead of time as you will have difficulty turning around further on. With all its 45 degree descents and boulderstrewn sections I would rate “Banggat” between Grades 3.5 and 4 – no problem if you have the right vehicle and remember the “don’t-touch-the-clutch” routine.

Just before we hit the flats of the Tankwa Karoo, we found the kind of picnic spot we’d been musing about. A dry riverbed with low-slung Acacia Karoo trees presented itself just as our stomachs were starting to protest, so we quickly set up our camping chairs and savoured a simple lunch of sardine and smoked mussels on Salticrax.

The rest of the trail through the Van der Merwe’s “Winteroord” Farm (winter pasturing for their sheep) before Ouberg Pass was a doddle (Grade 1-1.5) but still kept us awake with some engaging dry riverbed crossings. Ouberg Pass is one I’ve had the good fortune to have ascended once before in a vehicle (a Chevrolet Trailblazer 4×4) and twice on a motorcycle.

According to the excellent website, Mountain Passes of South Africa, Ouberg Pass has “an altitude gain of 820 metres over 10.4km to produce a stiff average gradient of 1:13 but the steepest parts are at 1:5 – which is very steep!” I can certainly vouch for the steepness of certain sections and although not designated as a 4×4 track, if it has been raining hard in these parts, the added traction of 4WD will ensure you get up or down safely.

Lionel and I stopped at the view-site about two thirds of the way up and paused to drink in the magnificent view and consider the folk of the late 1800s who first carved this route out of the mountain. Initially used by ox wagons, the pass apparently then fell into disuse by vehicles and for more than 80 years was used mainly as a “trek route” for farmers’ flocks in their bi-annual migration between Upper and Lower Karoo pastures. It was only in 1969, from funds collected by the Bo-Visrivier Boerevereeniging, that the current pass was built.

Spending time out of the vehicle in our spacious guest house on our return was a pleasure. It sleeps 10 people in four bedrooms, has a fireplace and DStv Premium in the cosy lounge, so we were not short of home comforts.

Being near Sutherland, local home of the heavens-gazing fraternity, I did feel compelled to try a few long exposure shots of the stars and galaxies orbiting above our heads. But, taking good night-time photos, where the grain pattern doesn’t compete with the stars and planets themselves, is an art which needs some mastering.

With a cold wind blowing most of the time we were there, we didn’t get to braai in the outside boma area; but at least spent the early part of one morning becoming acquainted with the farm’s layout by going on a walking tour with the farm’s four friendly dogs.

Late the next morning, Lionel and I headed out on the second and shorter trail (two hours, 16km), opting not to do the redmarked routes: “Granny’s Bum” and most of “Bojaan”. Having been in the car for two solid days, we almost gave this second excursion a miss, but I was glad we didn’t once I got out there and was wrestling with the wheel again.

The gradual ascent up to “Kameelkop” (Grade 1-1.5) was easy enough, but the jeep track became decidedly more rocky and challenging (Grade 2.5) between the “Red Rock” and “Black Eagle” markers. Turning onto the red-labelled “Bojaan” route a while later, we noticed the grass had grown long and as a result the rough track had become very indistinct.

After about half a kilometre we decided the long grass may well be covering all sorts of obstacles we wouldn’t be able to avoid and headed back via “Witkruis” to our digs to watch Super Rugby and drink beer instead. A venue with options is always a winner.

Province: Northern Cape
GPS: S 32’ 28.98 E 20’ 38.24
Nearest town: Sutherland – 45km
Directions: From Cape Town, head north on the N1 and take a left at the Sutherland turn-off opposite Matjiesfontein (234km from CT). Travel 103km and then turn left onto fi rst of Bo-Visrivier turn-offs. After 4km turn left at the T-Junction and keep on this gravel road for around 38km — you’ll fi nd Skurweberg Farm on your left.
Nearest fuel: Sutherland, but not on Sundays

All year, except after heavy rain and snow falls in winter

Terrain – Mountainous, rocky, some scree slopes with the odd sandy riverbed.
Grading – 1-4
Distances – The long “Perimeter trail” is around 50km (takes +- 6 hours) and the shorter internal “Kameelkop-WitKruis” circular route (excluding red route detours, “Granny’s Bum” and “Bojaan”) is about 16km (takes +- 2 hours).
Will I get lost – No, the map provided is reasonable and there are route-markers.
Recovery facilities – The owners have their own 4×4 and tractors on the farm.
On-site compressor – Yes
On-site pressure washer – Yes, but only “Bojaan” may require a net on the radiator.
Min/Max number of vehicles – Two is the normal minimum and no maximum stated.
Time of year – All year, but call ahead in peak winter to check if snowfalls are heavy.
Diff-lock – Not essential, unless very wet.

Tyres – All-terrains.
Recovery points – Always a good contingency
Sand tracks – Not necessary
Underbody protection – Yes
Softroader-friendly? – Partly – from the farmhouse to “Karoopunt” escarpment viewpoint is doable; as is the section from the farmhouse down Ouberg Pass and back in good weather.
What vehicle were we driving? – Isuzu KB300 LX 4×4 Extended Cab with 130kW D-Teq motor.

Some tricky boulder and steep scree slopes to descend. Some red-route sections, such as “Granny’s Bum” require advanced skills, but there are escape routes.

Wife and kids: definitely, much for them to do on the farm other than 4x4ing, such as: checking out the farm animals; swimming in the river pool; mountainbiking; hiking; bird-watching; playing with the friendly farm dogs and even DStv premium. 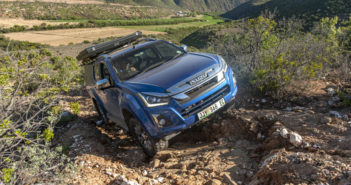 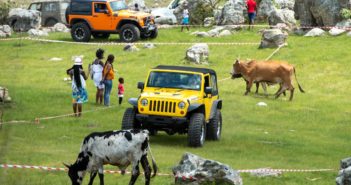 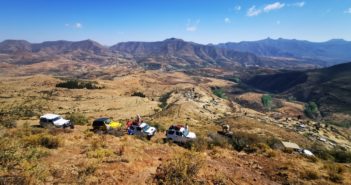