Upgrades make a big difference to the offroad performance of a standard truck, which is built for comfort and a compromise between off-road and on-tar performance. Add in a few hundred kilograms of camping gear, plus passengers, and you find the standard suspension taking major strain on bumps, dips and corrugations on any excursion to the bush.

It’s why one of the core hardware improvements worth making is to beef up the suspension. Conventional wisdom is that there are three major benefits. First, the vehicle is able to safely carry more weight over rough roads. Add up all the gear you typically carry, including things like a canopy and supplies of fuel and water, and the extra loadability makes sense. Second, the added height of an off-road biased set-up keeps the body and wheel arches further away from damage − a typical 50mm higher ride height makes a world of difference when you’re clambering over rocks and dealing with nasty axle twisters. Third, the aftermarket components are typically built stronger than the original equipment: in the case of our Hilux, think thicker coil springs and more leaves in the leaf spring pack. Also, the shock absorbers will have a wide diameter plunger, stronger attachment points, and likely a bigger bore, which enables them to take more oil – helping the aftermarket shock to run cooler. A full day of riding over intense corrugations will see shocks heating up to the point that they will burn your skin if touched; lesser shocks will self-destruct rapidly in these conditions. 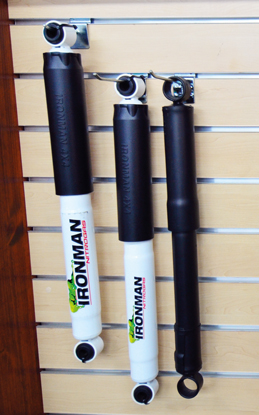 My choice for a suspension upgrade was one of the Ironman 4×4 kits. On the advice of that company’s local director and suspension guru, Mic van Zyl, I opted for the “C-rated” kit which offers an extra load-rating of 200-400kg at the rear, and 50-100kg at the front – the latter made sense as I also wanted to fit an airbag-compatible bull bar and winch. (More on that next month). The kit comprises all the relevant suspension hardware: beefier coil springs, stronger, raised semi-elliptic leaf springs with new shackle hangers and a complete set of polyurethane bushes, new U-bolts to hold the leaves in place, and a full set of FE-designated (not the comfort spec) Foam Cell twin-tube shock absorbers with a 40mm shaft and full-circle bolt eyes. Unlike standard gas shocks with a floating piston kept close to the oil layer using gas under pressure, foam cell shock technology uses an expanded foam layer between the tubes inside the shock to prevent the formation of bubbles in the shock oil as a result of cavitation. The latter can be a malaise of the typical standard nitro gas shock, resulting in reduced damping ability in the course of sustained heavy use.My Hilux Vigo, a 2010 model, was sorely in need of more ride height after I’d fitted a set of 265/75 BF Goodrich KO2 tyres. This is a great tyre choice, with tough sidewalls and the kind of grip you need off the tar. They had ably survived a few trails and trips through the Tankwa Karoo with no worries, but the larger-than-stock diameter meant that they were scraping the front wheel arches during braking, dips and tight turns. The standard springs were also feeling a bit tired after nearly 160 000km of varied use, and with the extra weight of a canopy, drawer system and camping gear, the Hilux was starting to wallow and crash heavily over washaways and anything resembling a bump.


Line up all the components alongside the OE shocks and springs, and you can see what you are getting for the kit price of R22 860: the leaves and coils are much more robust, the shocks significantly thicker. However, the fitment is critical and there are a host of tricks of the trade one needs to know at various stages of the process − this is not a job you want to tackle on your own without some prior training. Ours was fitted by the crack Zimbabwean team at Johann Viljoen’s First Alignment Centre in Brackenfell. It’s nearly a full day’s job for brothers Nyasha and Peter Watyoka, who do the front shocks and alignment duties respectively, assisted by Brian Vital Tembo, who got the short straw of the very dusty rear leaf springs. For this, Johann charges a very reasonable R1500, and these guys work fast, efficiently, and know exactly what they are doing and why. The process is documented alongside in pictures.

Suffice to say, the ride height front and rear was raised 70mm on average after fitment. This, with the vehicle not heavily loaded. The alignment must be checked after 500km, when the suspension settles a tad. Apart from the vehicle feeling much higher off the ground, the ride quality is very different. It feels more integrated, with the front spring rates matching the rears. Crashing over bumps has been replaced by a firmly damped shake, and the wallowing effect has gone. I expected a fairly “sharp” response to road imperfections, and more of a jittery feel without a full load, but this is not the case: it’s far smoother over all surfaces. A trip into the Cederberg is planned in the weeks ahead, and I will be able to give the new suspension a proper workout. On first take, it’s been a very worthwhile improvement.