There’s a killer on the loose, and she wants your blood…

Scientists have been waging war against the mosquito ever since Sir Ronald Ross (1857- 1932) identified the mosquito as being the culprit in the spread of the malaria parasite. Ross actually won the Nobel Prize for this discovery.

No matter how much insect repellent you cover yourself with, no matter whether you wear long trousers and long-sleeved shirts, tuck your trousers in your socks, make sure your shirt is tucked in, wear light-coloured clothing, or wear a mosquito net over your face, these little critters still manage to find some area of flesh to suck your blood from.

Why does it itch?

As the mosquito penetrates your skin with its proboscis, it injects a saliva containing a cocktail of anticoagulants. The itchiness is your body’s immune system kicking in to fight these anticoagulants by releasing histamine. As it does so, the blood vessels near the bite swell up, resulting in a red, itchy lump. The more you scratch the itch, the worse it becomes and the longer the itch lasts, because the body thinks it needs more antibodies (histamine) to fight the foreign proteins so it pumps more at it.

As hard as it may sound, avoiding scratching the itch and covering it in a dollop of antihistamine cream is the best thing you can do, as both counteract the body’s release of histamine.

Role in the food chain

Although mosquitoes are a menace unequalled by any other problem encountered while in the bush (and at home, of course), they play an important role in the food chain for a host of animals. The larvae are a valuable food source for fish, while the adults are preyed on by dragonflies and small birds. Unfortunately, to humans, they are little more than a persistent annoyance.

Mosquitoes are vectors for the spread of some very nasty diseases. We are all too familiar with their being responsible for the spreading of malaria, but they equally spread yellow fever, elephantiasis, encephalitis, West Nile disease, dengue fever and the Zika virus.

Millions of people die each year as a consequence of bites from this malicious insect. Strangely, though, it is only the female who is the bloodsucker; the male feeds on pollen and is actually an important pollinator. The female does not need the blood for nourishment, but requires proteins found in it for the production of eggs, and the process of laying them.

What attracts a mosquito?

Despite their small size, a female mosquito has sensory perceptions as sophisticated as any animal could possibly have. As she buzzes around, she is attracted to a host of smells and sights. And, while you are sitting comfortably outside enjoying the warm evening, you are giving off chemical signals which the female hones in on like a missile hurtling towards its target.

At 50m, she can smell the carbon dioxide you exhale, and the lactic acid ‘oozing’ from your skin. She can detect your body heat, the colour of your clothing, the silhouette you make against the sky, and even the soap or shampoo you washed with. She really is a true hunter in tune with her surroundings, and the key to preventing an attack is to throw a barrier around yourself to distract her from your scent.

Mosquitoes are most active during the hours from dusk to dawn. As soon as the sun begins to set, out they pop. Although dusk seems to be the peak hour for them to go hunting, they can be active at just about any hour of the day. The Bush mosquito (Aedes) here in southern Africa, is active during the day. Fortunately, although this species bites hard, it does not spread malaria. It is, however, responsible for the spread of Yellow fever and elephantiasis. Activity levels are at their highest during the summer months, so the rest-bite the cooler months bring is a good time to make the most of the outdoors − if you’ll excuse the pun.

Interestingly, mosquitoes attack specific regions of the body depending on their temperature, and the species of mosquito. Most are attracted to the slightly cooler extremities, which is apparently why they go for the arms and legs.

How to avoid a bite

There are many ways in which this can be done, but in my experience, none is truly 100% effective; it is often an amalgamation of measures which offers the best protection. Here are some tips you can use to help prevent bites if you are camping, staying at a lodge or simply sitting out in the garden at home.

Avoid setting up camp in shady areas where there is little breeze. Mosquitoes are weak fliers, so even a light breeze will help keep them at bay. If you are camping alongside running water, you are pretty safe. Stagnant water or swampy areas is a no-no, as these are perfect breeding grounds for mosquitoes.

Wear baggy, light-coloured clothing; mosquitoes are attracted to dark colours. Baggy clothing prevents the mosquito from sinking her mouth parts through the material and into your skin as soon as she lands on you.

In the morning, wash with scent-free soap, and give any clothing a good shaking. Just one vagrant mosquito hiding in a shirt, trousers or socks will spoil your day.

A no-brainer. If you are entering a region with a high malaria risk factor, take a course of antimalarial tablets. Always adhere to the instructions: begin them before entering the region, take the correct dose during, and continue them after your return.

The problem with taking antimalarial tablets longterm if you repeatedly visit malaria infected areas is the risk of mosquitoes building up resistance to them. We are witnessing this in some regions of the world, where even the strongest antimalarial tablets are not working. This is a very worrying scenario. Spray clothing with a commercial mosquito repellent. These are available from just about any retail outlet. When choosing a repellent for garment application, look for one containing permethrin; but do NOT apply permethrin to your skin as it is a potent insecticide. Repellents specifically for use on the body are available as sprays, or creams. Personally, I prefer creams as they give better skin coverage; most sprays end up in the air rather than on the body.

Nets are invaluable in ensuring a good night’s sleep. Just make sure that the net does not touch any part of your body – otherwise you may just as well not be sleeping with one – and that it is treated with a mosquito repellent. Ensure that your tent or caravan door/windows have mosquito-net protection.

If walking in the bush, wear a mosquito head net. Head nets are useful for not only keeping mosquitoes at bay, but all kinds of insects off your face – particularly flies, which can be just as annoying as they want moisture from your eyes and mouth.

I swear by these; they are one of the best deterrents I know of. To be most effective, they require a slight breeze which helps circulate the smoke, and they should be placed lowdown, otherwise the smoke goes straight up in a column and is ineffective. NEVER use coils inside a tent or confined space. They work by burning a very toxic insecticide that should not be inhaled. For similar reasons, they should not be used close to food or any cooking you may be doing.

Do as the locals do

I am a firm believer in nature’s deterrents. When I first came to live in Africa, (and have since witnessed this on many travels to neighbouring countries) I noticed how people would find dry elephant dung and burn it to keep mosquitoes at bay.

A little experimenting has shown me that the dung of cows and most grazing animals works just as well. Contrary to some preconceptions, dried dung smells better when it’s burning than it does when fresh. Anyway, even if it did stink, I’d rather that than spend an uncomfortable, sleepless night scratching myself raw. As the dung smoulders, the smoke should hang low in order to provide an effective barrier.

While many natural repellents may sound farcical, some do have their worth. For example, eating large amounts of garlic (wild or cultivated) produces an odour from the skin which mosquitoes find unpleasant.

Rubbing the juice or the peel of citrus fruits (lemons, oranges, grapefruits) onto the skin works as a repellent. Citrus juice contains a compound called d-limonene which mosquitoes dislike. A word of warning; although your skin may smell aromatic, the downside to covering it with citrus juice is that it becomes more sensitive to the sun, so you should still cover up well.

I know a few people who swear that rubbing an onion on their skin provides a barrier. I often wondered why they had no friends! An Australian friend also enthuses about the benefits of rubbing eucalyptus oil onto his skin. Well, I suppose it’s a bit more pleasant than stinking of onions, but he does smell like a cough-sweet!

Dried rosemary leaves burnt on the fire provide quite an effective repellent, as does burning Citronella leaves. Candles infused with Citronella are widely available.

One of the best natural mosquito repellents I have found is neem oil, or neem leaves. A 2% concentration of oil, which can be extracted from the seeds by boiling them in water, mixed with coconut oil and rubbed on the skin, will keep just about any insect at bay. The slightly moist leaves should be burnt to produce a hanging smoke. There is just one downside to neem oil/leaves; they smell worse than onions and garlic mixed together, which is probably why nothing will come near you!

Another tree which has repellent properties is the baobab. The leaves and seed pod can be burnt to give off a natural mosquito repellent. Unlike those of the neem tree, they do not smell as repulsive. 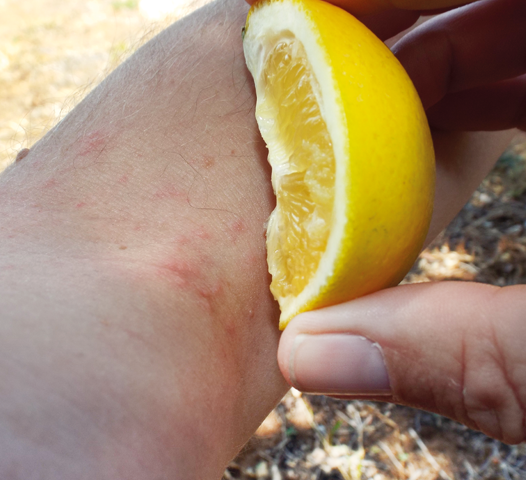 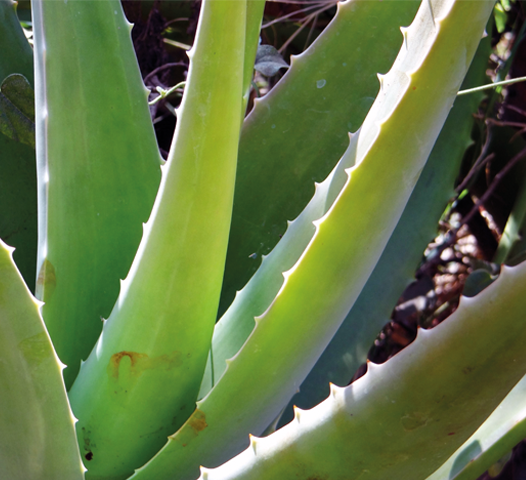 • Rub aloe vera over the bite; it will soothe the itching sensation.
• Rub the leaf or the juice from a plantain on the bite.
• The inside of a banana skin is also said to relieve the pain.
• Cover the bite with mud; as it dries, it draws out a lot of the anticoagulants.
• Place a hot compress (a tea bag is ideal) on the bite. This should be as hot as you can bear, but not scald the skin. The heat causes the body to release large amounts of histamine around the bite in one shot, rather than in dribs and drabs as it does if you scratch the bite, so bringing about immediate relief.
• Toothpaste or non-scented underarm deodorant will also bring about relief. As with mud, as it dries, it draws out the anticoagulants.

If the bite is so unbearable that you cannot resist scratching it, try slapping it instead. This stimulates the nerves and takes away the itching. Flicking the bite with an elastic band will also bring about similar relief; it may smart a bit, but at least it won’t itch.