Home » Tougher-er. The phrase Toyota uses to describe the new Hilux. But does it hold up?

The Hilux is an institution, making its debut in 1968. 52 years later and in its 8th generation, the current version was designed to be tougher, but also easier to live with. According to Toyota, they want to offer high levels of durability, with lots of interior space, improved ergonomics, the ride comfort of a passenger vehicle with the convenience of an SUV and the practicality of a bakkie. 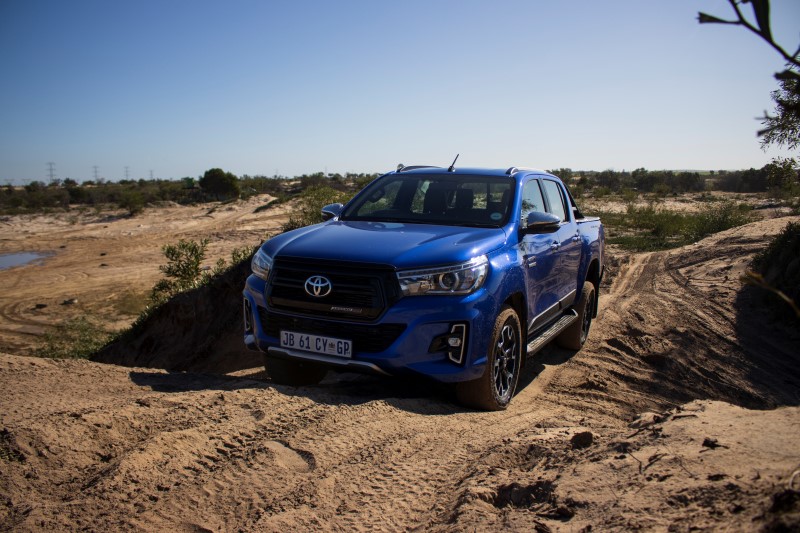 It is no secret South Africans love bakkies. Farmers, contractors and families have been buying Hilux’s like hotcakes due to their practicality and dependability. I’ve had the conversation with many enthusiasts of which bakkie we would buy if we were planning to tour through Africa. To my surprise, even seasoned owners of other manufacturers state they would take a Hilux, because they know they will find parts in case something goes wrong.

In South Africa we are quite fortunate that we have quite a varied model line-up to choose from. Body types include single cab, extended cab and double cab. Vehicles can be specified with a choice of two petrol and two diesel engines. 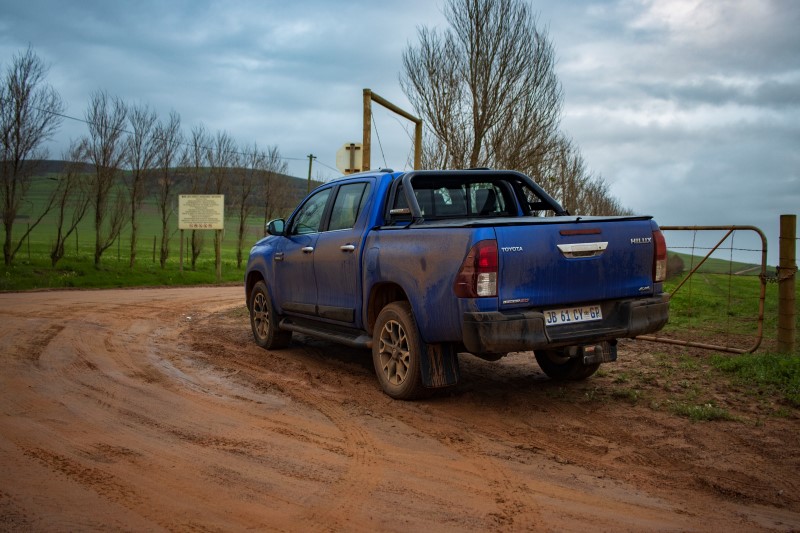 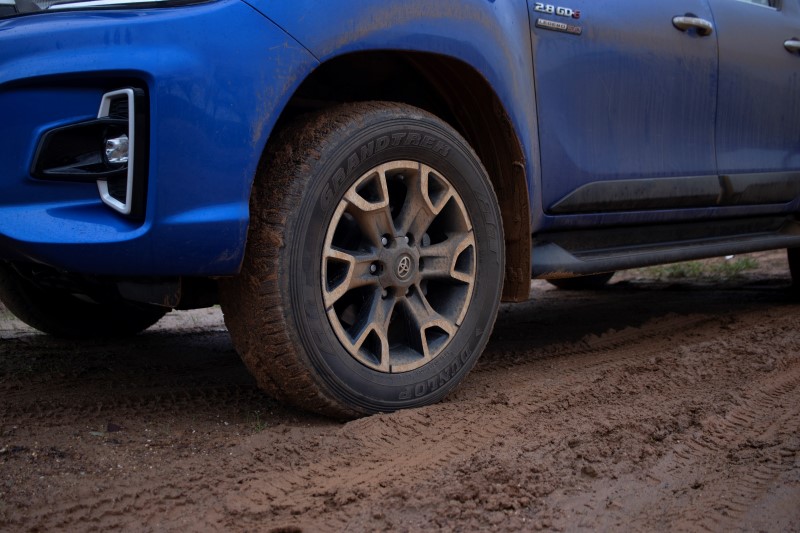 What we have here is the new Toyota Hilux Legend 50 2.8 GD6 MT double cab, in the colourful Cosmic Blue paint and 18” Legend 50 specific wheels. Including the aforementioned Cosmic Blue, the Legend is also available in Glacier White, Chromium Silver, Graphite Grey Metallic, Attitude Black, Inferno Metallic, Avant-Garde Bronze Metallic and Arizona Red.  It’s often quite tricky to comment on a vehicles styling, as it is very subjective. The previous Hilux, although a very competent car, was not in my opinion striking enough. It was a car of the time though, with most utility vehicles of that generation choosing function over form. In terms of design the current Hilux is to the 7th generation as it was to the 6th generation. Its not such a big overhaul as the 6th to 7th gen update, but big enough to know that you are looking at a new model. The front facia is complimented by LED foglights and headlights, although the brights are halogen. Not necessarily a bad thing as they still have a decent focus and penetrates the dark well.  The biggest changes on the design side for the 8th generation is in the interior.

It has a healthy mix of durable materials while still looking modern thanks to the 8” infotainment system and piano black panels topped with chrome. The 8” screen gives you access to the radio, Bluetooth and some economy information, accompanied with physical buttons for most controls, a welcome sight. Alongside the usual 12V lighter socket is a USB port, auxiliary port and a 220V socket. It’s kind of weird, you don’t think you need one, until you have one and then don’t anymore. In our case, charging cameras while out on the trails. We would love to see this on all bakkies and SUV’s. The seating position is decent with ample amount of adjustment, allowing for long stints while overlanding. Our test vehicle is priced at R684 500. Considering the equipment, and the brand reputation it is money well spent. 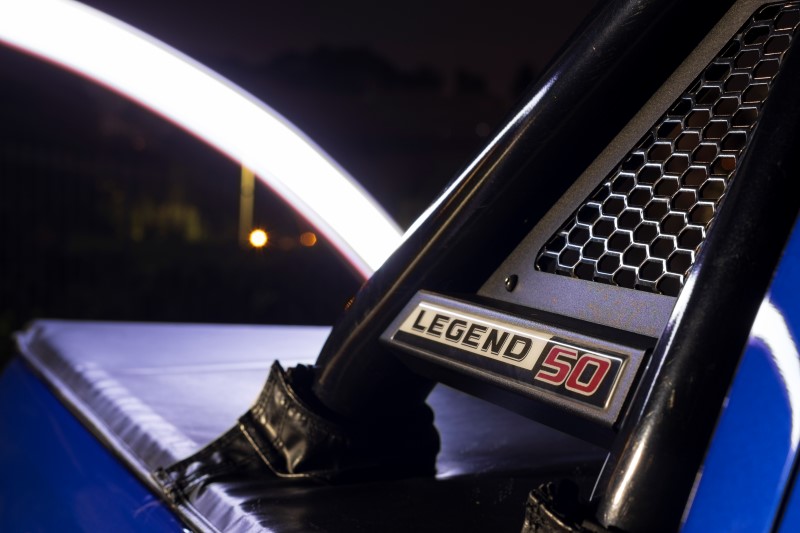 It’s time to get to the important stuff, how the new Hilux drives. The short and sweet of it is, no matter how great it looks or the toys it has to offer, if it can’t do what it was designed for, it won’t win the hearts and wallets of the people interested in buying them. A bakkie that doesn’t perform as a bakkie should, is no good.

The Hilux combined with the 2.8 GD6 engine and manual gearbox is a treat. It has stellar response low down, allowing the driver to trundle along around town at 60km/h at a nudge over 1000rpm resulting in some incredible fuel consumption figures, hovering between 4-8L/100km if you behave yourself, without having to change gears often. That is if you have it in ECO mode, one of two selectable driving modes, with POWER mode the alternative. In ECO mode, throttle response is dampened and the aircon’s output is reduced. The net result is highway consumption figures of roughly 7.8L/100km and city 9.8L/100km, competitive figures amongst its rivals. Complementing the driving modes is Intelligent Manual Transmission or iMT. Once a feature exclusively fitted to sports cars, it made its way into the Hilux. Essentially, when shifting gears down the ECU will rev match on your behalf based on speed, what gear you are going into and braking forced applied. 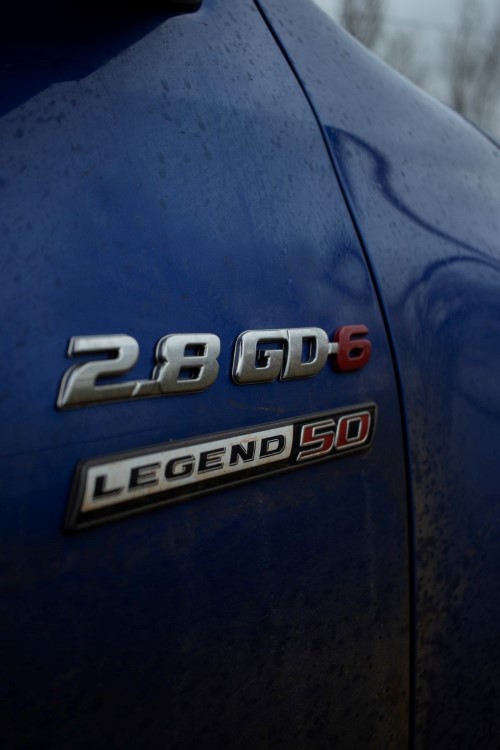 They have reasonable amounts of grip on gravel roads, but started clogging up a bit when the rain came, causing a slippery moment or two, but not to worry as stability control has you covered. In our opinion, the tyres are the only thing that lets the Hilux down. A set of proper all-terrain tyres will make a world of difference.

We decided to test the Hilux at Western Cape 4×4 & Difflock Ou Trekpad, about 30 minutes’ drive from Cape Town. It is a great place to play around in some sand, with a trail leading to the sandpit play area and to do it safely and relatively risk-free.

Here the Hilux comes into its own. With the tyres only deflated to 1.5 bar, the drivetrain had enough power to pull the vehicle through any patch of deep sand. Even off camber slopes are dealt with easily if you allow the vehicle to dig in a bit to find traction and guide you in the right direction.

The gearing of the manual gearbox allows you to tackle most obstacles in high range 4×4, with only the steeper loose stuff requiring low range and rear diff lock. iMT allowed us to not have to worry about downshifts, letting us focus on picking the right line to conquer obstacles. The Legend 50 has approach and departure angles of 31° and 26° respectively, class leading figures. A ground clearance of 279mm and a wading depth of 700mm allows the Hilux to be capable in almost all off-roading scenarios.

During testing, the only thing that let us down was the tyres. Its not a problem on flat or slight inclines, but on steep sections where speed is not an option, the tyres cannot dig in to provide grip. Your performance may vary, as this is terrain dependant.

As an overall package, our money is on the Hilux. It offers great performance on and off road, comfortability and durability. Toyota truly succeeded in their design philosophy.

Also we would very much like to take this opportunity to welcome the newest editions to the Toyota Corolla family.
Their new range of Corolla’s sedans and hatches which make for the perfect fuel efficient town-run-around vehicles.

However if you feel that curiosity has got the better of you – we highly suggest having a sneak peek at their other enhancements which Toyota have adapted to the remainder of their fleet ranges.