Just off the R62, at the top of Huisrivier Pass, a gravel road turns left down to Bennie and Selma Nel’s Matjiesvlei Guest Farm, where one can drive the Bojaankop 4×4 trail, among other attractions

I wager there isn’t a place in Africa where SA4x4’s blue Isuzu D-Max could feel more at home than at Bennie and Selma Nel’s Matjievlei Guest Farm up near Calitzdorp. Why, you might ask? Because Bennie Nel – the fifth generation to farm this land, high up in the foothills of the towering Swartberg Mountains – is a dyed-in-the-wool fan of the brand. If you include his adult son’s Isuzus, there are 10 in the family – with five bakkies and a truck still permanently on the farm. 30 years ago, they played a big part in helping Bennie establish sections of the fantastic Bojaankop 4×4 routes on the farm. Of course, just like everything else on the farm, the trail is steeped in history.
When I tell you that the trail actually started in the 1800s you’ll probably think I’ve been hitting the Witblitz. In fact, the potent moonshine distilled in these hidden hills and valleys of the Swartberg had a lot to do with the origins of the Matjiesvlei trail – or so we discover. Bennie delved into this history, sitting at the table near the kitchen where Meisie (who has run this household for the last 31years) kept us plied with good moer koffie.
“My ancestors and the sharecroppers (bywoners) used to collect and drag bundles of Wild Plum down from the steep foothills of the Swartberg,” he began. From the farmhouse down near the banks of the Gamka River, one looks up at these steep foothills in the shadow of the looming Swartberg Mountains behind, and you wonder at the industry of these early settlers. The dry and dead Wild Plum was used to distil the region’s legendary White Lightning moonshine and to dry the raisins farmed in the valley. 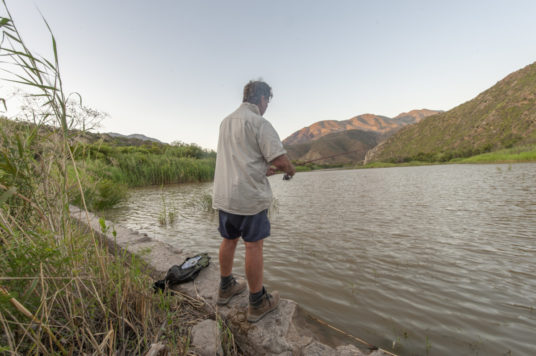 “Man, that Wild Plum is an even better-burning wood than the hardekool found up there in the bushveld!” said Bennie. In winter, the tenant farmer made the most of this resource and sold the wood in Calitzdorp for extra income.
Later, while driving the trail, Bennie pointed to a gnarled specimen of Wild Plum, saying, “That tree has been there since my boet and I tramped this veld as laaities.” Like their vehicles, things last a long time out here in the hidden valleys and hills of the Vlei.
The routes we were going to drive follow the paths where the old-timers dragged their firewood. Lower down, close to the Gamka River, the tweespoor we followed was originally made by the wagon and donkey carts as they loaded the wood.
For many years the veld was infested with prickly pears, but luckily a small Cochineal insect imported from Australia put paid to that pest. Now the trail runs through succulent Karoo, with a predominance of Spekboom. Getting around and tramping through the aromatic veld gives one an idea of the magnificent succulent diversity out here in the Klein Karoo. For this alone, Matjiesvlei is worth a visit.
The trail isn’t that long, being some 13km in total. But the views from the top of the steep foothills of the Swartberg are spectacular. Try and get out on the route in the early morning or later in the evening. The light and views are a photographer’s dream.
The average rating of the trail is between a Grade 2 and 3, which in theory makes it relatively easy for a range of skill levels. But there had been rain. So instead of leaving from near the bush camp, straight into a heart-stopping ascent, we took off from near the farmhouse. Leaving the bed of the Gamka River, we found the track had been washed away in places, forming deep gullies here and there. I had to engage low-range and used the diff lock to clear some sections, taking care not to fall into one of the deep trenches. (Normally, a soft-roader could attempt the route from this point.)
At the first river crossing, Bennie could not help but remind me of the first time I had to tackle this water obstacle. It was many moons ago that I first met Bennie, I guess 15 or even 20 years ago. I arrived to drive his trail in a brand-new soft-roader without low range! On that occasion, the river looked like the Nile in flood. Bennie reckons, “Jou donnerse oë gerek soos pierings!” (“Richard, your eyes stretched open like saucers!”) I then apparently said, “Bennie, I have to take photographs; you drive the bloody thing.” Yes, I admit, I have used this technique on more than that occasion to save a few pants wettings.
Usually one drives this trail counter-clockwise, starting near the bush campsite. However, if you are looking for a challenge, you can do a nail-biting descent. Bennie rates the final descent coming back from the lookout point at Bojaankop as a Grade 4 section.
The farm has been experienced a terrible drought, but miraculously had received some recent rain. I reckon the sphincter-tightening descent would now rate as a four-and-a-half to a five.
Of course, I needed Bennie to drive as I took the pictures. Just to show you what this Isuzu can do, I talked Bennie into driving up a substantial part of the descent from the bottom. It was way above my capabilities, but I got great pictures and it underlined the fact that the D-Max is plenty capable with the right driver behind the wheel. A better Isuzu man I couldn’t find if I had scoured the continent.
What is hard to describe is the hospitality of these hardy Klein Karoo farmers. I had a helluva job convincing Bennie and Selma that I couldn’t sleep another night at the farm. “I have to go and camp down at the bush camp,” I declared, “to get an authentic feel for the peace and quiet out here.” I think the only thing that got me off the hook was that Bennie wanted to watch the first T20 game against Australia.
I headed down to their lekker bush camp down on the river. What I didn’t tell the couple about the next day was that I forgot the rooftop tent ladder in the storeroom next to their house. I had off-loaded the fridge and ladder before heading out to drive the trail. I’m just glad that Bennie didn’t see the Engelsman packing ammo boxes on the Isuzu tailgate to be able to climb into bed later that night.
Things were better on the food front. I managed to open a jar of Selma’s green fig preserve and enjoyed it with a wedge of Camembert and fresh pot brood – the highlight of an open-air meal fit for a king. 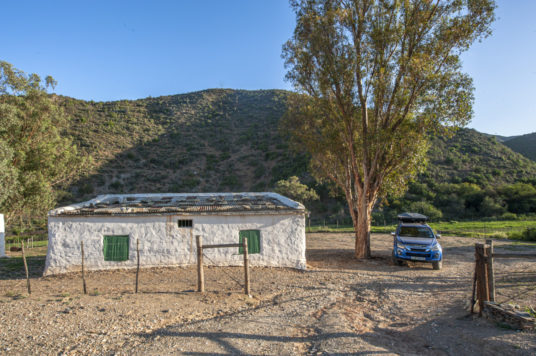 Trail Info
• LOCATION:
Province: Cape Province – Klein Karoo
GPS: S33 28” 24’ E21 37” 37’
Nearest Town: Calitzdorp, 11km
Directions: From Calitzdorp take the R62 to Ladismith, after 5km take the Matjiesvlei turnoff to the right. 4km further, turn left and travel the last 2km to the farm. From Cape Town take the R62 to Ladismith. Continue on the R62 for 40km in the direction of Calitzdorp and turn left to Matjiesvlei. Travel 4km and turn left, continue for the last 2km to the farm.
Nearest Fuel and Provisions: Calitzdorp
• Trail Details:
Opening Times: All year-round. But the best times are March/April/May and September/October – this is when the weather is not too hot or cold. The aloes flower in June/July and, in a good year, this is an amazing spectacle.
Terrain: Predominantly mountainous with gravel and rocky ascents and descents. There are two river crossings when the Gamka River is in flood.
Grading: 1-4
Distance: 12.7km
Will I get lost: No, as the trail is self-evident. If you feel the very steep descent is beyond your capabilities – no worries – you can simply return to the start of the trail the way you started.

Recovery Facilities: In an emergency, Bennie will come out to assist. But there will be a charge.
Compressor: Remember to bring your own compressor and tyre gauge.
Min/Max number of vehicles:
Best time of year: Each time of year has its own attractions.
Diff-Lock: Yes (if you intend doing the steep ascent).
Tyres: Cooper ST Maxx
Minimum ground clearance: 220mm
Underbody protection: Yes
Soft-roader-friendly: If you are confident driving your soft-roader you can drive the route starting near the farmstead up to the Bojaankop look-out point and return the same way.
What vehicle were you driving: Isuzu D-Max 3.0-litre LX 4×4 Auto.
Precautions: If you choose to follow the anti-clockwise route, starting near the river bush camp, you need to be a relatively experienced 4×4 driver.
Bring: Swimming costume, canoe or inflatable boat, fishing rod, binoculars, camera, mountain bike, hiking boots.
Wife and kids: Matjiesvlei Guest Farm is a wonderful place to bring the family. The farm is suitable for kids of all ages. Aside from the swimming, fishing, canoeing, and messing around in the river, kids can watch the ostriches being fed and the cows being milked. Calitzdorp is close with good restaurants, artists, a bespoke pipe maker (tobacco type), and the best port wine in the country.
Accommodation: I really like the simple shady 4×4 Dam River Camp. It’s a bush camp situated on the banks of the Gamka River. There is a large weir built by Bennie Nel’s great great grandfather. This ensures that – except in times of extreme drought – there’s a lekker place to swim and mess around on your canoe or inflatable. I like to fish from the weir too. There is a neat ablution block with flush loos and hot water from an extremely simple and easily-fired donkey. The Bojaankop 4×4 Trail starts close to the bush camp. There is no electricity at the camp, but you will find candles and matches in the toilets and showers.
Cottages: There are six lovely cottages to choose from at the Matjiesvlei Guest Farm. Huis op die Rant (sleeps 6) and Die Wa-Huis (sleeps 2) are on a flat ridge overlooking the Gamka River. These two cottages are relatively close to the farmstead. The other four (Oupad se Kloof, Thiart se Huis, Douglas Huis, and Cloete Huis) are further down the magnificent valley close to the Swartberg. Don’t forget to ask Selma for the key to the old Post Office, which is now a small museum.
Contact: Bennie or Selma Nel
(Selma) +27 (0) 73 174 1028
Bennie: +27 (0) 083 453 2209
Website: www.matjiesvlei.co.za
Email: matjiesvlei@telkomsa.net
Bojaankop 4×4 Trail Costs: R200 per vehicle.