It had been a helluva journey just to get there. Over 700km from the delightful hamlet of Van Zylsrus, deep in the Kalahari, of which at least 300km were on some tough dirt tracks. But I’d take a challenging gravel detour over a narcolepsy-inducing blacktop any day.

One such dirt-track detour is worth mentioning.  91km south of Brandvlei, you turn left towards Koosdrif siding, and this gravel gem shaves about 40km of tar road off your journey and puts you straight onto the Middelpos road that eventually leads to Sutherland. A word of caution, though − if it has been raining hard before you get there, rather go on the tar; these “rooiklei” roads can be pretty much un-driveable in the wet.

“You made it,” quipped Martin Swanepoel. He reached out his farm-toughened hands to greet my co-pilot David Lowe and me as we crossed the threshold of Stofkraal in the approaching dusk.

One of our chief reasons for visiting this remote farm was the chance to drive its 4×4 track. Unbeknown to David and me at the time, Martin had himself rebuilt much of the 13km mountainside and stone riverbed 4×4 track that we were to drive the next day. It had been a labour of love and determination, and had taken him and his ten-pound hammer (plus a few other basic tools) four months to build. In the end, what he had achieved was to re-establish the old supply access route to the herders who used to live in small stone dwellings deep in the mountains. 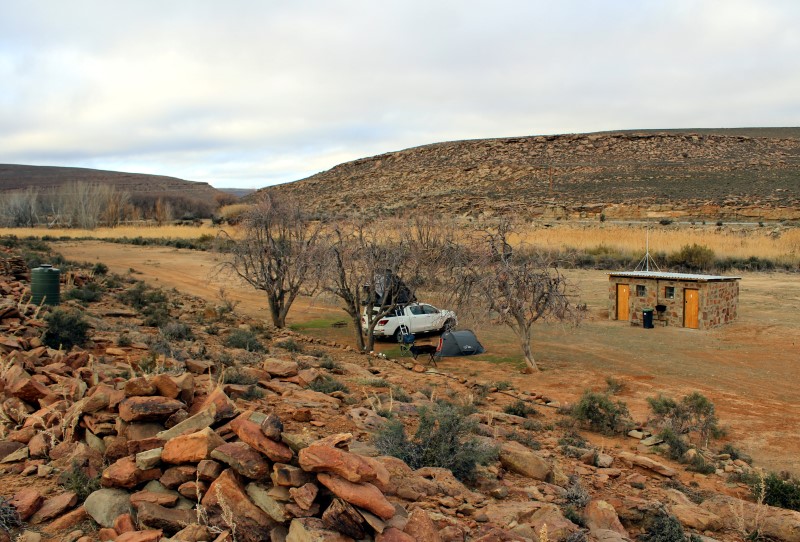 The rustic campsite is accessible only by 4X4.

“If this Grade 2 road to the campsite is anything to go by, we are in for a testing drive tomorrow,” I told David, who was hanging onto the handholds as we bucked and swayed our way into the rustic-looking campground.

It turned out to be a prescient observation. Martin has graded the route a 3-4, but there are one or two sections I thought might just edge it over the 4 mark. I probably should have realised the extent of the challenges which lay ahead when I’d told him the previous day that we wanted a challenge, but were a little worried about our ground clearance; to which he’d replied: “Don’t worry, Nick; we’ll just pack rocks under your wheels.”

But the first three to four kilometres of the trail, over reasonable gravel and some hardened ruts and rocks that wound up a dry river valley, lulled us into believing that the route might be easier than we’d thought.

Our minds were quickly set straight on that point, though. The road soon deteriorated and I needed to really concentrate to make it through some narrow rocky drifts, hoping all the time that I wouldn’t snag the BT-50’s sidewalls on the sharp-looking rocks.

Then, just as I seemed to be getting the hang of the track, the ‘road’ disappeared altogether. Up ahead in a rocky riverbed, I saw Martin get out of his much-converted old Hilux and stand there waiting for us to catch up, a wry smile creasing his sun-hardened features.

“This is where we separate the men from the boys,” he said, revelling in the expression of disbelief on my face as I looked at the 600mm rock ledge he wanted our vehicle to climb… and that was just the beginning! But the week I’d been driving the Mazda BT-50 ‘camper’ had taught me not to underestimate this powerful and capable off-roader, so, with low-range selected and the rear diff-lock engaged, I edged forward under Martin’s guidance.

After another few kilometres of similarly challenging stuff, the gravel road reappeared and Martin signalled us to stop. Pointing to a cave some 150 metres up the mountainside, he asked if we’d like to walk there and take in the view of the track which lay ahead.

David and I both agreed, welcoming the opportunity to stretch our legs and enjoy some respite from the bouncing vehicle. Resting up against the cool of the cave’s back wall, we felt a sense of kinship with the San, who must surely have taken shelter in these caves in millennia past. The view up and down the kloof was spectacular, and we surveyed the 4×4 route which lay ahead, winding its way up the mountain on the other side of the valley.

“Well done for making it up the mountain, folks; just one more steep descent and then we will stop at that old ruin down there for a quick braai,” said Martin later, pointing at what looked like a collapsed croft with an intact chimney some distance below.

With Martin leading the way, we watched the Hilux’s axles contort in opposite directions as it clawed its way down the precipitous slope. I knew I would need to draw on any remaining skill levels I had in reserve to get ourselves and the vehicle down in one piece.

“Nick, wait up; you’ve got a flat tyre, boet!” I heard David shout as I was about to grind my way over a half-metre ledge that could easily have broken the rim, or worse, had I continued. If David hadn’t been out of the vehicle taking photos, this could well have been ‘game over’ for us. As it was, it took the three of us more than half an hour: both to stop the vehicle from slipping down the slope, and to change the tyre. 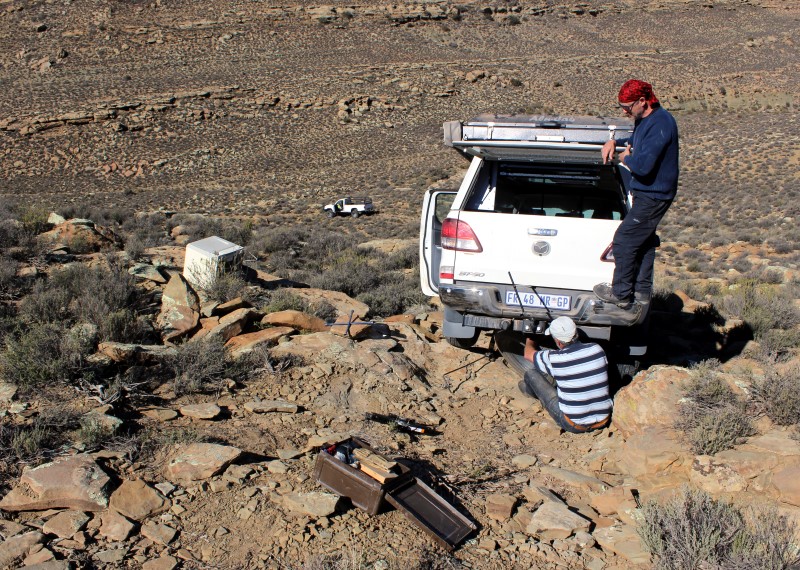 Getting a puncture on a 40° slope is about as challenging a tyre change as you can get.

By the time we got to the ruin, we really felt we’d earned a lunch break. David and I set off on a hike up two different branches of a side-kloof, each trying to find the source of a perennial fountain Martin had told us supported the ‘bywoners’ who had lived there.

But neither of us had success. It seemed that the terrible drought that is still severely affecting Sutherland’s farming community (animal feed is desperately needed – contact Lien Fourie on 023 5712 745 should you want to donate) had dried up this resource, as well. By the time we got back from our walk, Martin had some home-made ‘plaaswors’ sizzling in the ruin’s old fireplace, and we were soon enjoying the best Boerewors rolls we’d had in ages.

It was stops like these, and, of course, the exacting nature of the trail itself, that set this 4×4 track apart from many others I’ve been on.

According to Martin, the remaining six kilometres or so was going to be relatively easy; but I had come to view this sort of remark with a degree of caution. The trail certainly did become less rocky and slightly easier as it crossed the grassier and sandier foothills of the larger mountains we’d traversed, but there were still some steep axle-twisting dongas and drifts to negotiate, and these kept the mind focused for much of the remaining route.

When we reached the end of the trail, our yen for 4×4-ing had been totally satisfied, and we felt that we’d earned the beers we were going to drink while watching the Super Rugby final between the Lions and Crusaders later that evening.

We were just hoping the Lions would provide the perfect end to a great day.