There’s just never enough time to fit it all in. A cliché that’s been beaten to death, sure; but one that always seems to ring true when I’m on an off-road-travel writing assignment.

On our way to the Namaqua National Park in our trusty loaner, the camp-ready Mazda BT-50, I was hoping to start our 4×4 sortie earlier by accessing the park’s southern gate via Brand se Baai – the Groenriviersmond coastal track. But, after picking up my co-pilot and fellow adventurer, David Lowe, later than expected from Bloubergstrand, I had to park that desire in the ”Unfinished Business” folder and face the boring blacktop.

Instead, David and I stopped for a feed at the Klawer Wimpy, and cornered a case of cheap and cheerful red (organic, nogal!) at the nearby wine shop before hitting the N7 again. Had I not wanted to top up with diesel in Garies, I would have taken the short-cut farm track about 17km south of the town and saved over 30km. But I was still learning the BT-50s drinking habits, and decided to top-up so that we could wander all over the Namaqua National Park without fear of range anxiety.

In terms of the 4×4 experience in the park, SAN Parks gives a fairly detailed description of the 200km of tracks on their website. And it’s worth downloading and printing out before you depart, because the Eco Route booklet (which they say is available to visitors) was unfortunately nowhere to be found at the Groenriviersmond Gate’s offices. Instead, we had to make do with the general visitors’ map which doesn’t carry all the pertinent route information.

It’s not that you’d get lost easily without it, but there are a number of good side-notes to the trail – including interesting historical, geographical and nature-oriented titbits. The route that we were going to explore, arguably one of the most sensible and therefore most popular ones, is the 165kmodd trail from Groenriviersmond to the junction with the N7 about 15km south of Springbok.

We enjoyed the first 19km of the sandy coastal track on our way to the campsite at the much-renowned Kwass se Baai. As the ranger had marked on our map, it was only the last 6 or 7km where the sand was really thick, and that required a bit of skill. But with our tyres down to 1.2 bars as recommended, the BT-50’s 147kW and 470Nm turbo diesel intercooled powerplant and six-speed auto gearbox made light work of the challenge.

Like all of the coastal campsites in the Namaqua National Park, Kwass se Baai offers the most basic of facilities: a halfmoon- shaped rock-walled boma, and a long-drop ‘eco-loo’. And, with no water or rubbish bin facility provided, it’s very much like bush camping in Botswana: you need to bring everything with you and be prepared to take everything out.

Yet this very paucity of creature comforts, and the fact that you need a 4×4 to get there, is what makes these campsites so alluring to adventure travellers. Besides, it gives us a chance to use all those wonderful pieces of camping gear bolted onto our vehicles − and talking of which, I was super-impressed with the Alu-Cab Generation 3 Expedition tent on the BT-50’s roof; the ease with which it goes up ensures that you’re having a beer around the fire in next to no time. And, fortunately for David, his Front Runner Pop- Up tent was almost as easy to set up, and he was also soon able to enjoy a sun-downer.

Over a few Irish whiskies later, we decided that instead of doing more driving the next day, we’d have a rest and relaxation day and then get up early on the following morning (our day of departure) and complete in one go the balance of the 4×4 Eco Route we’d planned.

It was an inspired decision that allowed us to sleep in late, take a mid-morning wash in the sea, and then set out on about a fivekilometre beach walk along the hard sand just short of the incoming tide. The pristine clarity of the rock pools that we came across made us hopeful that this stretch of coastline was exempt from the plastic pollution that is so rife in our oceans today. At one point, a long expanse of empty mussel shells snapped and crunched noisily under our feet, causing a mixed flock of waders and sea birds to fly lazily down the beach.

Once we were back and enjoying a multisnack lunch under our Alu-Cab awning, we were pondering what animal could have made the trails of clawed tracks we’d seen among the dunes − until a large Golden Mongoose came to visit and answered our question.

We managed to get away reasonably early the next day, and started our 4×4 outing with a ride up a nearby hillside to take a last look at the crescent-shaped bay. The coastal track for the next 10km to our first detour at Skuinsbaai Noord was a mix of sand, gravel and a few large muddy puddles which we had fun splashing through – an easy Grade 1 track.

But the 8km round trip into Skuinsbaai Noord, near the start of the Bitterrivier Dune Fields, proved more challenging. Thick, soft sands and a relatively high middle-mannetjie indicated that I might need to put my rally-face on; but, once again, the BT-50 and its superbly off-roadmatched automatic transmission hardly caused me or the vehicle to break into a sweat.

Our next detour was a 21km circular route that rose up and away from the coast; this proved to be a fairly mild gravel-andclay affair that wandered past a dilapidated pioneer farmer’s dwelling and showcased a few ostriches scattered among the desert succulents. Apart from the sweeping views of the rugged coastline, I treasured my first sighting of a South African Shelduck − one that we discovered on the edge of an old well.

Back in the Bitterrivier dune fields (a good example of a moving dune system – apparently one of the only functioning systems still left on the South African coast), the sand driving became more challenging again; but then it eased up as we neared the seal-colony turn-off.

It’s worth taking the short detour (about 6km) to see the seals, and David and I spent a good 15 minutes watching the roiling masses of them scarper into the sea as we approached. However, a few were so soundly asleep in the sun when we approached that we got within about three metres of them before they squealed indignantly and joined their mates gathered on the lower-lying rocks at the sea’s edge.

It wasn’t until we crossed the Hondeklipbaai-Garies Road later, and started up the gated dirt track on the other side of it, that we saw our first Caracal 4×4 Eco Route signboard. This 28km section led us on a reasonable old farm track – another Grade 1 —past a few abandoned farmsteads, and we had a number of good gemsboksightings along the way.

Once you reach the Koingnaas- Kamieskroon road, the 4×4 route ‘proper’ is virtually over. But, with the driving challenge of the Wildeperdehoek Pass to come (we still had a great distance to cover that day and needed to travel it rally-style) the excitement was not over.

When we arrived at the T-Junction with the N7 outside Springbok later, I calculated that we’d done around 200km (with detours) from Groenriviersmond in a cumulative time (with stops) of about five hours. Probably the most enjoyable and refreshing five hours either of us had spent in a vehicle for a long time. 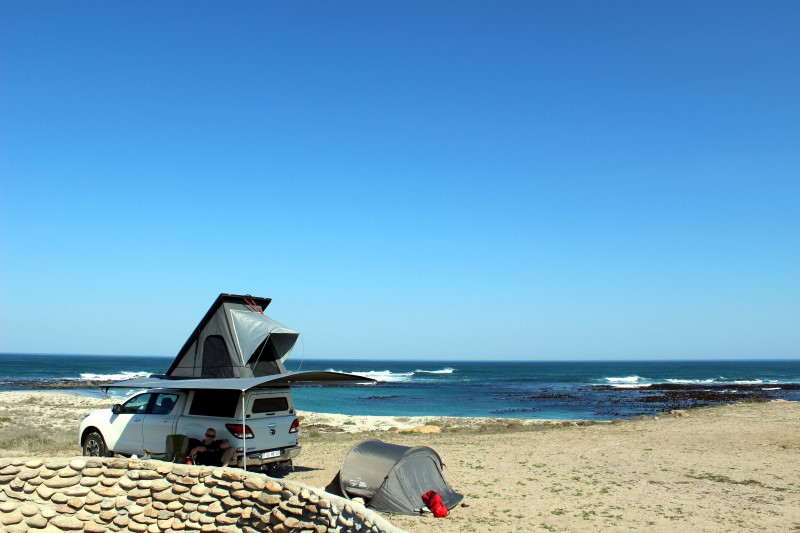 • Opening times: All year, but certain sections may be closed during the wet season.
• Terrain: Thick sands, gravel roads, muddy puddles and a few slippery claylike surfaces when wet.
• Grading: 1-2
• Distances: SANParks lists 200km of “4×4 Eco Trail tracks” which can be followed in the park, but less than half of that is true 4×4 territory.
• Will I get lost? No, the map provided is good, but I recommend that you download the full route-guide from the SAN Park website as it’s not always available on-site.
• Recovery facilities: None available, and although the rangers are very friendly and helpful, they are few and far between. But if you’ve had some sand-driving experience and carry sand tracks, you should be fine.
• On-site compressor: No
• Min/Max number of vehicles: No prescriptions, but two vehicles are always better than one.
• Time of year: All year, but the August- September flower season is obviously popular.
• Diff-lock: Nice to have ‘in case’, but we didn’t need to use ours on this route.
• Tyres: All-terrains with good sand and gravel capabilities.
• Minimum ground clearance: 200mm
• Underbody protection: Not essential, but a good precaution.
• Softroader-friendly? This is a tricky one to answer, as a softroader with a good ground clearance (min. 200mm) and correctly deflated AT tyres may be able to make it, but there are two or three thick sand sections that suggest it may be more prudent for softroaders to camp either at Groenriviersmond or Delwerskamp in the southern section of the park, or at Skilpad Camp in the east.
• What vehicle were we driving? Mazda BT-50 4×4 3.2l turbo-diesel.
• PRECAUTIONS: Thick, soft sand is all you need to worry about – if this concerns you, take some instruction and ensure that you drive the tricky sections before 09:00.

• Wife and kids: Only the most adventurehardened spouses and most natureloving children will enjoy it here — best to leave city softies and tech-addicts at home.
• Pets: Not allowed.

• Camping – The coastal campsites offer rudimentary facilities (you need to take everything with you, including the kitchen sink,) but are situated in pristine and tranquil coastal settings. Rates: R145 p.p.p.n plus a conservation fee of R 40 p.p.p.d.

However, during the peak flower season (18 August to 10 September), , SAN Parks do offer all-inclusive serviced dome tent packages , both on the coast and at Skilpad base camp — see their website for rates & details.

• Chalets: — There are four fullyequipped self-catering cottages at Skilpad base camp that each sleep three adults, or two adults and two small children. Rates: from R665-R1110 (excluding the daily conservation fee of R40 per adult and R20 per child per day) for the first 2 people, and then R260 per extra adult per night and R130 extra per child per night.
• Other: Luiperdskloof Cottage – a three bedroomed house that sleeps 6 adults comfortably, but has no electricity, is only accessible by 4×4, and is 2-3 hours’ drive from the Skilpad base camp.