Anyone who has to load cargo vessels for a living will tell you that packing is a science with a bit of art thrown into the mix. When crossing oceans, you can’t have ships listing to one side or prows pointing to the stars. Same with the guys trying to fit the contents of large houses into the defined space of a furniture removal van. These guys are the true Tetris geniuses, because there’s hell to pay if priceless antiques are left behind, or the van falls over at the first roundabout.

Loading up for an overlanding mission is much the same. With a few added complications. Not only do you need to distribute weight according to a few sound principles, you also need to have ready access to regularly used items when on the road. Perhaps the cardinal rule is this: think like a hiker who has to carry everything on their back; focus on the essentials and toss out the nice-to-haves.

As we advised last month, it’s always better to leave as big a gap as possible between what you carry and the manufacturer’s recommended Gross Vehicle Mass (GVM) – which includes all accessories, passengers, and anything else being carried. Think very carefully about what accessories you fit. If you don’t need that winch or an extra spare wheel, then leave it off your fixed weight schedule. Go for lighter materials where possible, especially when the weight is perched high up or at the extremities of the vehicle. Heavier-duty springs improve the vehicle’s ability to carry a bigger load, and there will be less hitting of the bump stops on the worst roads. This does mean ride quality when not loaded will be harsher. Every so often, fully unpack your vehicle – lay every item out on the ground and comb through what you have not used in the last few adventures. Pare back, but keep in essentials like first-aid kits and recovery gear. That second tent and extra groundsheet for ‘just in case’, toss it back into the garage.

If you have ever tried to balance a kayak or a long ladder on your shoulders, while trying to get somewhere in a high wind, you will know in real time about the Polar Moment of Inertia. Suffice to say, one’s efforts to change direction by generating torque (rotation) from the centre of a long object are pretty much pitiful. This is known as a large moment of inertia, and is precisely why you do not want to hang heavy objects like a bullbar and winch, or rear bumper with two spares way out the front or rear end of your vehicle. Race car designers and engineers know all about this stuff, and their task is to create a shorter moment of inertia by trying to get all the heavy parts of the car closer to its centre.

That’s why mid-engined race cars are so composed and balanced, and also why early Porsche 911s, with their engines way out the back, tended to be found in ditches on Saturday nights. The pendulum effect of too much weight on either end leads to nosediving and pitching under braking, oversteering when cornering, and far more body roll.
You don’t want your 4×4 to handle like the proverbial pig, so think carefully about your set-up. Too-large wheels and tyres are among the culprits, with the added effect of premature wheel bearing wear, reduced braking ability, and rapid brake wear. When fitting water tanks and fuel tanks, see if you can get them centred on the vehicle, that is, between the wheels and between the axles. When packing a drawer system, for example, get the heaviest items to the furthest end of the drawers.

There is another useful bit of physics to get one’s head around. There is always a multiplier effect the further one places weight ahead of the front axle, or more critically, aft of the rear axle. The axle acts as a lever pivot point, such that the dynamic mass of the winch and bullbar up front is greater than the actual mass of the items. Similarly, if you load a 250kg pallet close to the tailgate of a bakkie, it will effectively weigh more than if it was close to the cab. There are mathematical formulas for this stuff, but the nett effect of weight too far back will be lighter, less effective steering and thus a reduced safe cornering ability.

Roof rack manufacturers promise you can load 300kg or more to their racks. This is fine if it is a static load; in other words you are not driving with it. In reality, vehicles are designed to safely carry not much more than 100kg up top, as this raises the centre of gravity outside of manufacturer specification. Add much more weight up top and the rollover danger increases, plus the effect of dynamic transfer of all this weight is pitching forward under braking, rearing back on acceleration, and far more side-to-side roll.

Keep those jerrycans off the roof and rather fit extra fuel tanks for extended range sorties. Keep the roof for the occasional bundle of wood and light items – the maximum being reached with just a rooftop tent, in most cases. The core takeaway is this: the centre of gravity is key to vehicle handling, so keep heavy items as low down as possible in the vehicle. Sling extra fuel and water tanks under the chassis if you can, and heavy recovery gear central and first in. The other trick, of course, is to try and balance the load so the vehicle is evenly packed left to right. Before you finalise the packing for a trip, get out, have a look with someone in the driver’s seat, and then possibly put that fridge on the other side, or think about relocating your second battery the next time you head out.

Rule 4: Keep it all secure

The amount of chafing and rattling that goes on between all your packed items on a corrugated road is hard to believe. Two hours on a rough road with a few big potholes can wear holes in load bodies, destroy PVC tent bags, and mash the entire contents of your fridge. The simple solution is to tie things down securely using bungy straps and ratchet tie-downs. Ensure you have tie-down points that can take the strain, or get them fitted. Wedge soft items between heavy or sharp-edged items. Fit a cargo net if there is lots of assorted gear that threatens to bounce across the vehicle. It also helps to put categories of items together in labelled boxes, and these in turn can go into a drawer system. 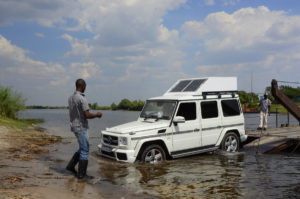 This G63 is specced for ride comfort, and on a trip through Zambia was regularly on its bump stops over the worst roads. Not the fault of the vehicle. The owner had designed a very cleverly aerodynamic roof carrier to ensure his jerrycans didn’t cause excess drag, but was simply carrying too much weight both inside and up top. 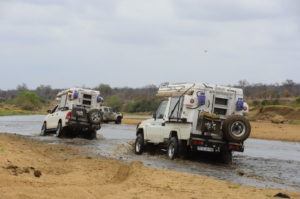 The Abba Campers built by Jos Joubert which we used on an extended trail back in 2017 have everything that opens, shuts, heats and cools. Plus more besides for the regular camping enthusiast. But they are heavy, and on the lighter-bodied Hilux, help was needed from air springs to keep the handling on an even keel. The Land Cruiser’s heavier-duty springs and extra grunt were far better suited. 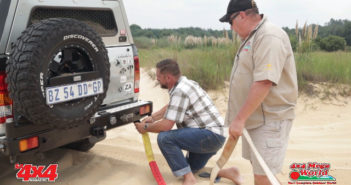