There are two types of travellers out there: those who plan and those who ‘wing it’. Personally, I’m of the latter variety. I’d like to tell you that it’s because I’m an adventurous soul, a person whose heart yearns for the long road of mystery; but the truth is (and I’m sure my wife will agree with me here), that I’m a pathetic organiser and I hate booking things. To some, it’s seen as a shameful quality and often mistaken as laziness; but, in my defence, it’s simply a character trait.Words and image by Grant Spolander

My need to know more is outweighed by my supreme confidence that I can sleep just about anywhere… provided I have a few beers beforehand. And so, with a fridge full of brewskis, we left Pretoria at 19:00 on a Sunday evening to find a 4×4 trail, and, with luck, a patch of grass to sleep on. Originally, we’d had plans to drive a route in central KZN, but unforeseen circumstances saw us cancelling that trip at the last minute and heading east to Mpumalanga. With help from Tracks4Africa’s inexhaustible database, we eventually found a little-known trail called White Waters.

The trail weaves its way through a 270-hectare private nature reserve known as Hamilton Parks Country Lodge, which is about 14km from Hazyview. (This makes it a great place to stop before heading into Kruger, or crossing the border into Mozambique.) We arrived at a random campsite at 22:00 in the pitch dark – luckily, there’s no shortage of accommodation near Hazyview and the security guard let us in. Early the next morning we were on our way to Hamilton Parks to drive the White Waters 4×4 route.

A quick chat to the lodge owner and 4×4 enthusiast, Karl Molich, revealed that the trail’s been around for four years or so, and that it’s very popular with the locals and regional 4×4 clubs. Karl built the trail himself, and does what he can to keep it well maintained for guests at the lodge, as well as for day visitors who want to drive the route. The lodge is named after James Stevenson-Hamilton, born in Dublin to Scottish parents; a military man who was stationed in SA back in 1888, and who later became the first warden of the Kruger National Park.

The legend has it that, when Stevenson-Hamilton asked his superior, Sir Godfrey Lagden, what was expected of him at his new post, he was famously told, “Make yourself thoroughly disagreeable to everyone.” Hamilton did a great job of fulfilling this role; it didn’t take long before he was given the Shangaan nickname of Skukuza, meaning ‘He who sweeps away.’ The nickname was a reference to Stevenson-Hamilton’s chasing locals away to make room for the park, and possibly to his efforts in eliminating poachers from it.

Our apologies for a technical hitch which saw the print and digital edition of this map being illegible: 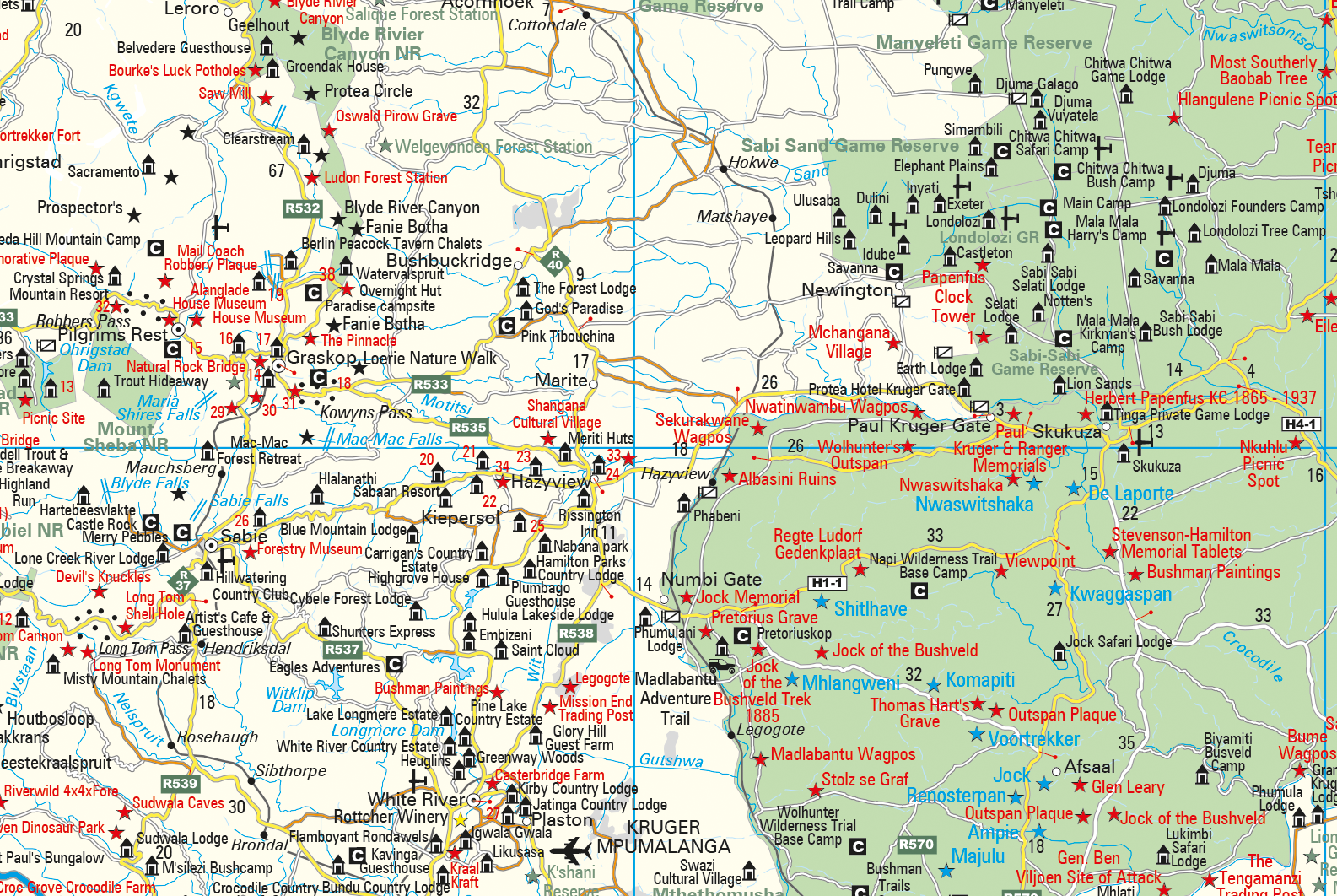