If you are open to their clues, various animals can lead you to water in an emergency, but once you have found a water source, you should not simply go and drink it, even if it looks clean.

Water is a two-edged sword. It is the most important element we need to keep our body working, but it can house bacteria and pathogens which can cause us great harm.

It is therefore important that we treat all water, irrespective of how ‘clean’ it may appear, in such a way that we render these harmful organisms harmless to us.

Before we look at the means of making water safe, let’s clear up a common confusion. Filtering water and purifying water are two very different things. Filtering water, is where we remove sediment and other bits of rubbish floating around in it. Purifying is where we kill the living pathogens we cannot see. So, although filtering removes impurities, it does not remove bacteria and other pathogens, and while purifying kills pathogens, it does not remove impurities. That being said, there are some commercial filters which can do both.

If you do not carry a means of filtering and purifying water, both actions can easily be achieved with everyday things you may be carrying, or even wearing.

The easiest and simplest way of filtering water is to pass it through a cloth of some sort. This will catch particulates floating around in it. The tighter the weave, the smaller the particles which can be moved.

One can also create a multilayered filter using a sock (preferably a clean one), or by tying off the bottom of a trouser leg. Place at the bottom of the improvised filter a layer of sand; on top of this a layer of slightly coarser grit, and finally a layer of, for example, grass. Th e idea is to get layers of varying degrees of coarseness through which the water passes to catch different-sized particles, so the more layers, the better.

There is a belief that charcoal from the fire can be used for water purification. Th is is not so. The charcoal in commercial filters has been activated by heating it to very high temperatures (370 to 450°C) in the absence of oxygen. By doing so, its surface area becomes extremely porous, allowing it to interact with impurities in the water.

Now that the water has been filtered, we need to purify it. And the easiest and most reliable means of doing that is to boil it. Bringing water to the boil and boiling it vigorously for a minimum of three minutes will kill any viruses, bacteria, parasitic cysts, or anything else which may be swimming about in it.

When the water has cooled, it is safe to drink. Unfortunately, boiling does not remove chemical pollutants, insecticides, metals or poor odours.

Some people even go as far as saying it gives the water a ‘stale taste’, but that’s the price we have to pay for making it safe to drink. Boiling has one drawback, and that is it requires a lot of fuel in the form of wood which has to be collected and prepared.

Various chemicals are used in the purification of water, the two most common being chlorine and iodine. As effective as they are, both have drawbacks.

It is important that the manufacturers’ recommendations be followed at all times.

Iodine is available either in tablet or liquid form, with tablets being the< >easier to use. It has a few side effects, though, and should not be used if you suffer any form of thyroid condition, have an allergy to it, or are pregnant. It is fast-acting and even remains active in alkaline water. 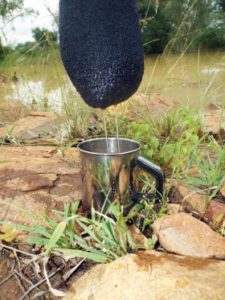 As with iodine, it is sold in both tablet and liquid form, though tablets are more widely available. Contact time is slightly longer than for iodine, but it is safer to use by those suffering iodine allergy. Its effectiveness can be slowed down when used in water from limestone or chalky regions, in which case it will require a longer contact time. Possibly its biggest drawback is that it makes the water taste and smell like a swimming pool, though this can be alleviated by using neutralising tablets.

Water is life’s necessity, so treating it to make it safe is vital. Just because it looks clean as it flows along a river or stream, is not guarantee it is not harbouring microscopic bacteria and other water-borne protozoa which can prove debilitating. So never assume it is safe; treat it before drinking it.