With thanks to Branden Austen of Deltec Energy Solutions

There are three types of wiring configurations that are relatively easy to learn. Once these are mastered, the wiring of batteries or solar modules becomes easy as pie.

The three configurations are:

In any DC-generating device such as a battery or solar module, you will always have a negative (-) terminal and a positive (+) terminal. Electrons (or current) flow from the negative terminal through a load to the positive terminal. For ease of explanation, we shall refer to a solar module or battery as a “Device”. 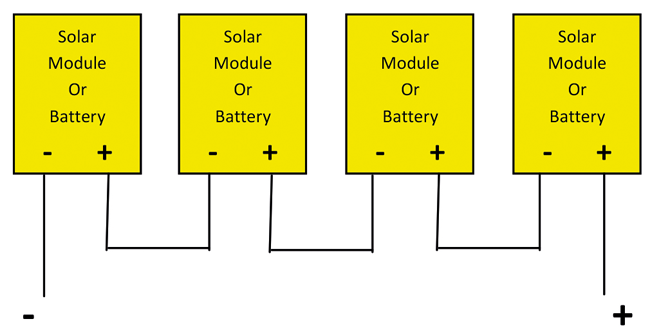 It is important to know that, when you wire devices in series, the individual voltage of each device is additive. In other words, if each device in the above example had the potential of producing 12 volts, then 12 + 12 + 12 +12 = 48 volts. If these devices were batteries, then the total voltage of the battery pack would be 48 volts. If they were solar modules that produced 17 Volts each, then the total voltage of the solar array would be 48 volts. 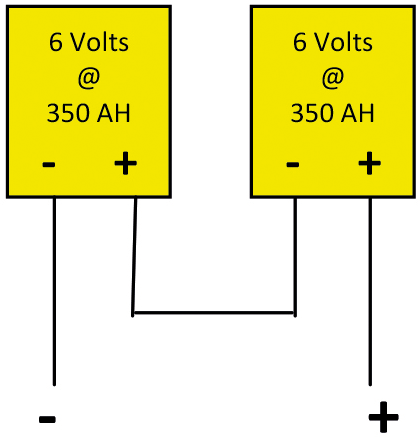 If the devices in the example above were solar modules which were rated at 17 volts each @ 4.4 amps, then this series circuit would yield 34 volts at 4.4 amps.

Remember that the Voltage in a series circuit is additive and that the Current stays the same.

Important: When you wire devices in parallel, the resulting Voltage and Current is just the opposite of a series circuit. The Voltage in a parallel circuit stays the same, and the Current is additive. If each device in the example to the left had the potential of producing 350 Amp hours, then 350 + 350 = 700 Amp hours, but the Voltage would stay the same.

If the devices in the example were batteries which were rated at 12 volts each @ 220 Amps, then this parallel circuit would yield 12 volts @ 880 Amp hours.

Remember the Voltage in a parallel circuit stays the same and the Current is additive. 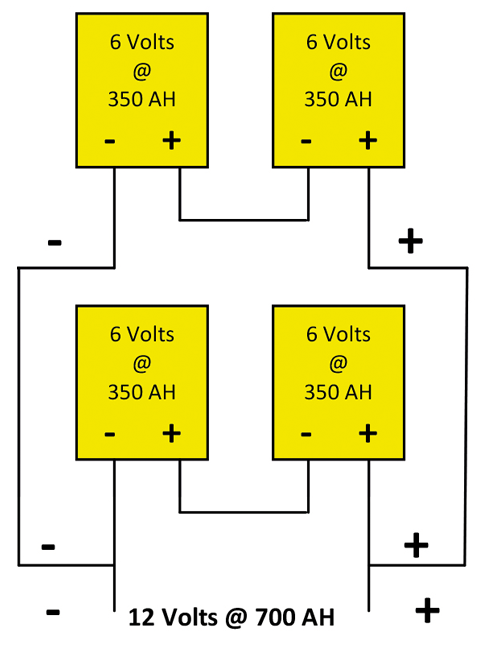 Hold on to your hats, because here’s where it gets a little wild. Actually, you’ve already learned all you need to know to understand series/parallel circuits.

A series/parallel circuit is simply two or more series circuits that are wired together in parallel.

In the example pictured, two separate pairs of 6 Volt batteries have been wired in series and each of these series pairs has been wired together in parallel.

You might be asking why in the world someone would want to put themselves through this. Well, let’s suppose that you want to increase the Amp hour rating of a battery pack so that you can run your appliances longer, but you need to wire the pack in such a way as to keep the battery pack at 12 volts. Or you want to increase the charging capacity of your solar array, but you need to wire the solar modules in a way that will keep the solar array at 34 volts… Well, series/parallel is the only way to do either of those.

Since we need 12 volts but have 6 volt batteries (or, in the case of solar modules, we need 34 volts and have 17 volt modules on hand), wiring the batteries or solar modules in series allow us to get the 12 volts or 34 volts that we need.