Home » A Tale of Two Routes

South Africa’s secondary roads are full of possibilities and 4×4 potential, as Nick Yell proves on two Eastern Cape loops – an alternative to the Baviaanskloof, and a history-inspired meander through the Amatola region inland of East London.

Baviaans-lite. This is how I had imagined the first of the two routes that my fiancée, Annette and I, were to go on: a 270km dirt track that was to take us off the tarred N9 outside Uniondale and eventually deposit us on the R334 to Uitenhage. Although we planned to detour off this route to wrestle with the Gonjah 4×4 trail near Patensie, I was looking forward to this challenging alternative route to PE, particularly as – unlike Baviaanskloof – it’s not on everyone’s bucket list. But, as we were to discover, it certainly should be. 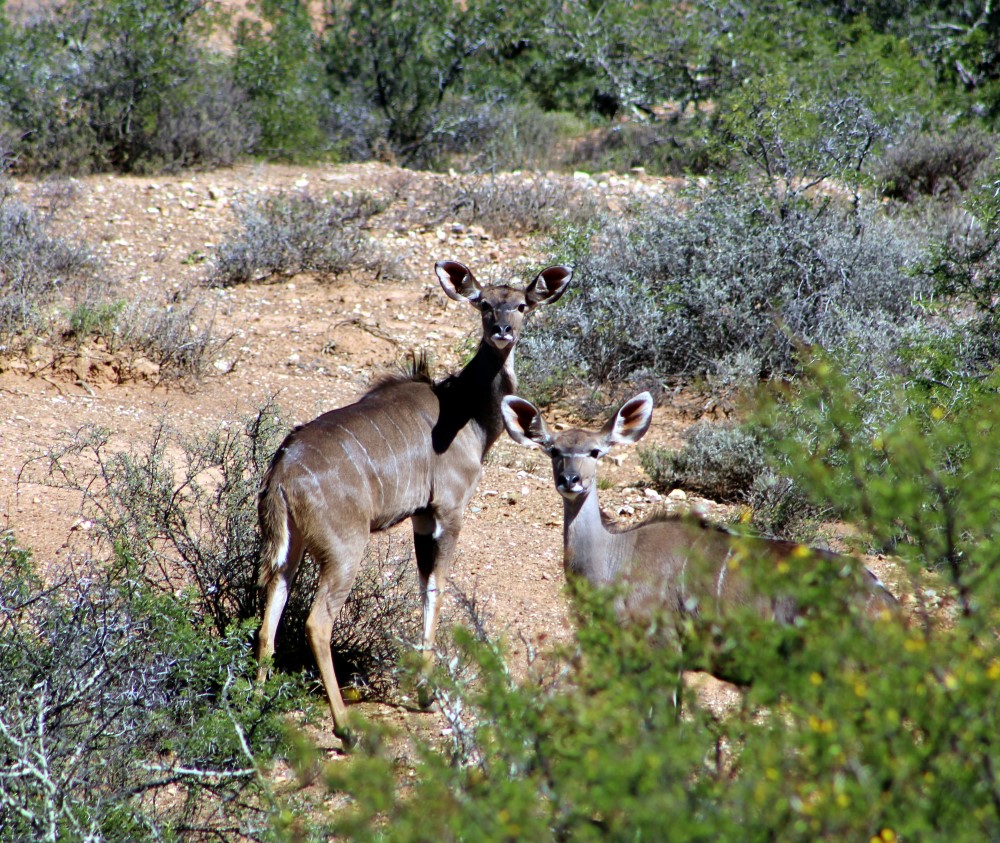 Wildlife sightings along this pristine route are frequent.

“Okay, so if we were going to do the Baviaanskloof like that line of cars that just passed us, we would turn right to Nuwekloof now,” I commented to Annette.

Although it’s an illusionary notion even on secondary roads, it’s good to feel that you’re pioneering a new way of getting somewhere, and is a hobby I never tire of in our “different worlds within in one country” with its 500 000 km of gravel roads just waiting to be explored.

Start and end points: From 13 km outside Uniondale, to the T-Junction with the R334 about 14 km south-west of Uitenhage. See map inset for details.

Towns en route: None directly, although Patensie will be only 16 km out of your way.

Surface: All gravel, sand and rocky tracks, except for about the last 8 km which is tarred.

Suitable for 4WD soft-roaders: A qualified yes − if clearance is at least 200 mm, tyres are quality All Terrains, the track is not muddy and the weather is good.

Precautions: Check for heavy rains a week prior to doing the route; if the Grootrivier is in flood and the weir is overflowing too fast, getting across the drift may be hazardous. Also be sure to take sufficient petrol, food and water in case of breakdowns.

The gravel roads from Uniondale had been relatively silky past the farms of Hartebeest Post, Zaaimansdal and Kouga Game Farm (where we’d had good sightings of white springbok and giraffe) until we turned off the main dirt road to Willowmore at the Winterhoek signboard. But I knew from a past motorbike adventure-ride that the dirt track ahead to Steytlerville was about to get more challenging, especially after the recent rains.

Sure enough, we crossed over a number of sections where the road surface had been washed away, and where the sandy outwash was thicker than it had been when I’d passed through previously. This is still softroader territory, and it’s aptly labelled as a tourist scenic route — the rugged Karoo veld stretches to the red rock facades of the Baviaanskloof Mountains in the south, and to the svelte green folds of the Grootwinterhoek mountains in the east.

After 30km, we reached the Grootrivierspoort turn-off (you need to really look for the signboard because it’s been mostly consumed by an acacia tree) and the first of the two horseshoe-shaped sections we’d plotted on the map. It promised to be a rough dirt track through rough country: modern pioneering territory.

For the first half of this 60km section, you follow the base of the Baviaanskloofberge. You track through a few Grade 1-2 sections, passing deserted farmsteads and scraping through overgrown acacia and aloe avenues which echo a dystopian future − one in which the vegetation has claimed back the roads, and only giant leopard tortoises have survived.

But, after crawling through this adventurous section, the next 30km becomes an almost sedan-friendly gravel road as it sweeps past successful-looking farms. It was as we passed through a rocky kloof on this dirt track that we had a magical sighting of three kudu cows bounding down a mountainside and across the road.

The main challenge of the day was still in front of us – the transit of the Grootrivier Poort, the gruelling Antoniesberg Pass and the apparently spine-jarring Elandspad that rides up and on top of the Baviaanskloofberge. I’d wanted to tackle this section for a number of years and had been thwarted on my last attempt when the river was in flood and I was persuaded by a local farmer that my Pajero media car might well disappear downstream.

Since then, a large water-pumping project has been built in the valley and seemingly regulates the flow, which makes the river-crossing more of a certainty than it used to be. In line with reports I’d read, the 50km which follows from the last Steytlerville junction to the T-Junction with the R331 outside Patensie is still the stunningly beautiful rollercoaster ride I’d expected, and it delivered dramatic passes, epic mountain scenery, a complete sense of wilderness (we didn’t see another car the whole way) and Grade 1-2+ sections − in spades.

“What sort of buck are those over there?” Annette asked me, as we ground our way towards the top of the steep pass out of the Grootrivierspoort.

Bounding over the loose rocks towards a sheer drop-off a few hundred metres in front of us, were two klipspringers: just one of the species of mountain antelope we saw on this alpine section. In addition, we were confronted by a cacophony of frogs as we traversed a short marshy section, and a herd of obstinate Nguni cattle that looked at us as if we were alien life-forms. This wet and long-grassed plateau was a precursor to the final ascent over a series of rocky and rutted sections before our descent towards the Patensie/Uitenhage T-junction. This done, we found that the views of the Cockscomb from the top were spectacular.

Wildlife sightings along this pristine route are frequent.

From here, we deviated from the route to Patensie, and the delights of the nearby Gonjah 4×4 trail, and tucked in an overnight stay at Kudu Kaya’s riverside campsite on the eastern edge of the Baviaanskloof. Both come highly recommended. From there, after a couple of days, we continued the route.

For the rest of Nick’s adventure through the Eastern Cape, grab a copy of the August edition of SA4x4 Magazine.