Home » Around the Bend on the Mutali 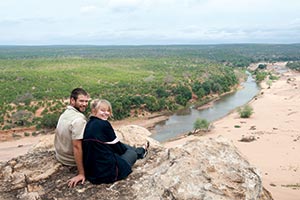 It’s amazing what a search for cold beer will lead to. Camping on the western side of the Mapungubwe National Park close to the Limpopo River, I felt the sudden urge for a cold frosty. “Love, lets head down to that spaza shop we saw on the way to camp, it’s only a couple of kilometres from here… ”. Climbing into our MegaWorld Amarok, we mooched along to the little winkel under a tree. But no luck on the beer front. Happily, the good lady at the spaza shop directed us to a grog outlet on a nearby farm. Of course, en route I got totally lost. We ended up having a magic day, though, dawdling down next to the Limpopo River, and eventually we found Parma farm – which was exactly where the woman from the spaza shop had said it would be! We left with Hansa quarts, a kilo of crocodile steaks and a packet of Surf. But the highlight of our day, which our directionless meanderings had led us to, was Ratho, a campsite on the banks of “the great grey-green, greasy Limpopo River, all set about with fever trees”. This was a place quickly earmarked for future trips.

Although there were plenty more fever trees to come, this trip was to be about contrasts: from Afro-temperate Mistbelt Forests to semi-deciduous Scrub Forest, Afromontane Grasslands, Sour Bushveld, Mixed Bushveld, and Mopane Woodlands, to a recently-discovered small area of Brachsteygia Woodland, known to us common folk as Masasa trees, near the small rural village of Gundani. Actually, all this namedropping is another way of saying that I’d never seen such a variety of beauty and scenery in such a relatively small piece of Africa. I must confess that those botanical names are courtesy of Sarah Venter of Makhodo/Louis Trichardt. Meeting Sarah was one of those lucky breaks that old hacks like me dream about. It was in an article about the Limpopo Birding route that I saw Sarah’s phone number – what a find! Born and bred in the Soutpansberg, this woman has a doctorate in forestry, and an encyclopaedic knowledge of birds; she speaks fluent TshiVenda and probably knows every path, track and homestead in this mountainous rural community. It was Sarah who convinced us that we should spend some time in rural Venda.

“I travelled this whole area for my work for years – often totally alone. This is an incredibly safe area – a lot safer that the cities where you guys come from.” Her directions led us to Christopher Nethonzhe at Golwe Community Camp, and a visit to the newlydiscovered Brachsteygia Woodland at the Gundani Community Camp. I’ll bend your ears about all this a bit later. But let’s go back to the very beginning, even before our search for beer. It started in Cape Town months earlier with a message from SA4x4 HQ: “Get yourselves up to Mapungubwe, but don’t do the normal circuit; find something new.” What a challenge! I’d last visited the region some 20 years before. Looking at my maps on Garmin Base Camp, Dominique and I realised that if we could get the VW for two weeks we could explore the Soutpansberg first, then head east into rural Venda with its artists, sacred lakes, myths and legends, before swinging into the Kruger Park at the Punda Maria gate. From here we would follow the Limpopo River to Musina and on to the main prize at Mapungubwe. Louis Trichardt, our first stop on day one, was some five hours’ drive from Joburg. When we met John and Gail Grieves at their farm Buzzard Mountain Retreat, some 17 kilometres outside town, I said, “John, I can remember that when we first met, you were wearing a spanking new Toyota cap.” He replied, “Hell, Richard; that was 1994!”

Well, we were back, and I couldn’t wait to have my first off-road experience in the Amarok. I had a vague memory of a steep, rocky, mountain road snaking up to the campsite. Happily, nothing had changed, so I pushed the low-range button and we crawled our way up higher and higher into the forest, until the ochre and reddish sandstone cliffs loomed high above our first night’s campsite…