The Oxford dictionary describes an underdog as “A competitor thought to have little chance of winning a fight or contest.” Using this definition, we can compare two apparent underdogs from completely opposite ends of the spectrum − the one being Boers at war, and the other being Mitsubishi’s Pajero Sport. Both sides have been outnumbered by challengers, yet put up a fight so strong that battles have turned in their favour.

The source of this odd comparison and strange introduction to my story can be attributed to Mitsubishi themselves. Whether it was an intentional attempt at published comparisons or not, they took us to the sombre battlefields in KwaZulu-Natal, where the Boers were outnumbered five-to-two during the battle of Spion Kop. It was on this famous hill that the outgunned Boers used skill and cunning to match their ill-prepared rivals.

With regard to the Pajero Sport in its current state, the sales charts would certainly consider it outgunned, as its biggest rival (the Toyota Fortuner) outsells it by 10 to one. But why? The Pajero is a brilliantly-judged product. It features suspension, a tractable engine, and a cleverly organised interior.

South Africans are so loyal to a brand that sometimes we fail to consider the underdog – despite, on closer inspection, seeing clear advantages. For a limited run only, Mitsubishi has equipped their Pajero Sport Shogun with so many extras that it’s become a bargain you’d be silly not to consider. In typical Mitsubishi fashion, modifications to the Pajero Sport are purely there to benefit off-road prowess, not styling. No ground-clearancekilling chrome nonsense here; just solid aftermarket kit, making the Pajero Sport Shogun undoubtedly the most capable out-of-the-box SUV in its segment.

To test the R70k worth of upgrades given to the Shogun, we took it on an adventure that covered well over 1000km of degraded gravel, Grade 5 trails and, of course, the tedium of highway miles. We would be driving along quad-bike trails and 4×4 routes, and blazing our own trails to explore the battlefields of the past and find out what this Mitsubishi is all about. 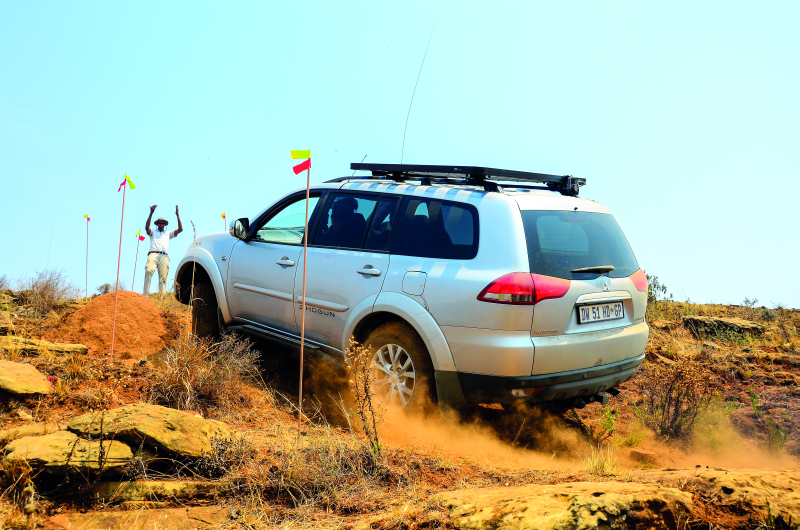