Thick sand, water crossings, salts pans, rough roads – a Mercedes-Benz Sprinter takes it all in its stride on a Botswana tour from Moremi in the north to the Makgadikgadi pans down south.

For more information on this and other Protea 4×4 Adventures, fill out the form at the end of this article.

Our radio crackled to life. “Guys, make absolutely sure you have engaged four-wheel drive.” Jannie Rykaart then repeated the message for good measure, and I glanced sideways at my mate Kobus – aka Kabous. We both wore a hint of smirk. For the last hour, we had been aiming the front wheels of our Mercedes Sprinter AWD at the thickest sand Botswana could offer, and the big Merc had been eating it up like a Dakar monster truck. Thing is, we had been cruising in just rear-wheel drive, hence the grins.

I’d better explain. This was a trip with Jannie Rykaart of Protea Safari Tours. The plan was to go up to Maun and on to Moremi before heading down to the Makgadikgadi Pans Game Reserve, but, in the pre-departure phase, I’d received a slightly nervous call from Jannie. “I’ve managed to get a Mercedes Sprinter AWD, but the tracks in Moremi and the Pans often need low range… We are just going to have to be hellish careful!”

I’d never been to Moremi. If they had to organise a Trabant, I wanted in on this gig. As it turned out, I was now part of the story of a big white bus, a home on wheels, and a photographer’s dream wildlife-vehicle. I christened our Sprinter ‘The Studio’. 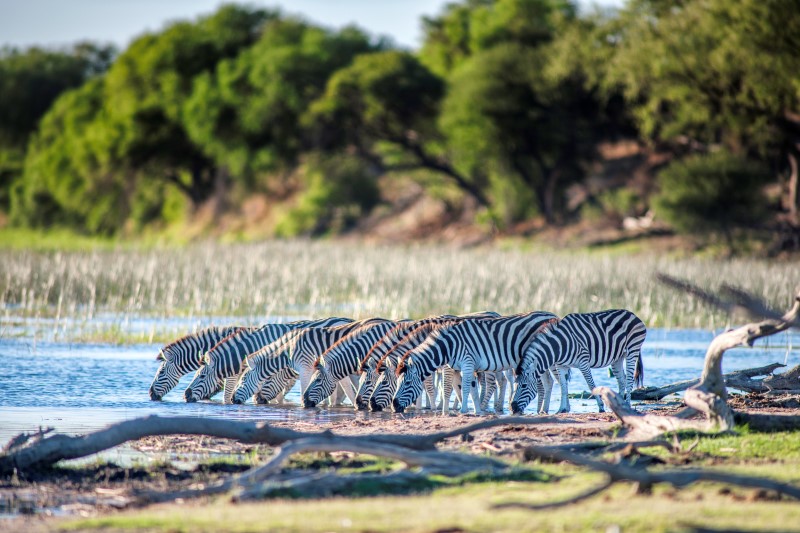 An example of the photography made possible by ‘The Studio’.

An advantage of the Sprinter became apparent on our first night in Botswana. We had driven from Joburg, crossed the border at Martin’s Drift, and headed up to Serowe. After stocking up with food, we carried on for 25km to the Khama Rhino Sanctuary, our first camp on the trip. With the sun setting, we watched a rhino and her calf (surrounded by a large herd of eland) drinking at a small, almost dry pan near our camp. But rain clouds were building, and Jannie said, “Get your tents up: I reckon we’re in for a storm.”

The rain came down in buckets; and, of course, I smugly hadn’t put up my tent – I’d simply moved the Snomaster fridge in the back of the Sprinter onto the wide rear bench seat, and folded out my mattress. In seconds, I had snug five-star accommodation. I didn’t put up a tent for the rest of the trip.

Flight of a lifetime

Jannie wasted no time in whisking us off to Maun International Airport, where we were booked on an hour’s flight over the swamps in a six-seater Cessna 206 Stationair. Our young pilot, Lelo Fundisi, was soon flying low over the swamps, the silver tentacles of the delta glistening below our wings. Banking widely to the left, she said one word, loudly: “Buffalo.” All those black dots on the bank of the largest winding channel were buffalo − literally hundreds of them. This low-level flight over the Delta gives you some idea of the immensity of this natural miracle; although it is some 15 000 square kilometres in the dry season, it increases to 22 000 square kilometres in the wet! 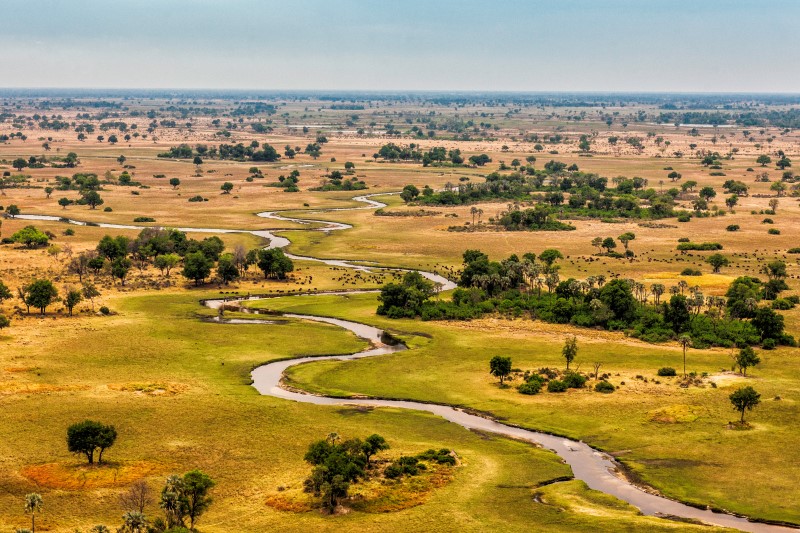 The Makgadikgadi Pans, a salt pan with an area of 3900 square kilometres, is situated in the middle of the dry savanna of north-eastern Botswana. It is one of the largest salt flats in the world. The pan is all that remains of the formerly enormous Lake Makgadikgadi.

Lying southeast of the Okavango Delta and surrounded by the Kalahari Desert, Makgadikgadi is technically not a single pan, but many pans with desert in between, the largest being the Sua (Sowa), Nwetwe and Nxai Pans.

The only plant life is a thin layer of blue-green algae, and wildlife avoids the region during the harsh dry season of strong hot winds. After rain, the pan becomes an important habitat for migrating animals − including wildebeest and one of Africa’s biggest zebra populations, and the large predators that prey on them. The wet season also brings migratory birds such as ducks, geese and Great White Pelicans. The pan is home to one of the only two breeding populations of Greater Flamingos in southern Africa.

The main entrance to the park is about halfway between Maun and the town of Nata on the Francistown road. Travelling west, it is 45km from Gweta to the turn-off. There is another entrance at Khumaga, about 48km south-west of the main entrance, toward the Central Kalahari Game Reserve.

The beauty of the park is that every time of the year offers a completely different experience.

March-October (Dry Season). The pans themselves are accessible only during this time. Nights can be cold.

August-November. Windy weather starts – large herds of zebra and wildebeest migrate down to the Boteti River to wait for the rains.

November-March (Rainy season). Roads become wet and inaccessible.  Pans often still hold water in April and May – there is good game viewing and birding at this time.

The Khama Rhino Sanctuary is a community-driven project established in 1992 with the aim of saving the endangered rhino, and bringing an area that used to teem with wildlife back to its former glory. Some 25km from Serowe, it covers 8 585 hectares of Kalahari Sandveld. Although tiny compared to Moremi, it still has a population of white and black rhino, as well as over 30 other animal species and more than 230 species of birds.

There is a pub and restaurant, and a small shop. The Sanctuary offers excellent camping facilities. There is hot water available, but no electricity apart from that in the ablution blocks. There are eight chalets to choose from, located in different areas. Bedding and towels, braai facilities, a bar fridge and an electric kettle are provided.

Island Safari Lodge
Island Safari Lodge is one of the iconic camps in Maun. The campsite is roomy and spacious, with tons of shade under the canopy of large trees fringing the riverbank. There’s free Wi-Fi close to the restaurant. If you’re heading to Moremi, Maun is the place to stock up. There’s a Spar, a Choppies, a Woolworths, a Checkers and a Shell garage all close to the International Airport on your way into town. They all accept Visa & MasterCard. Remember to take insect repellent if you intend taking a boat cruise from the Island Safari Lodge. Also take something warm, as it can be chilly out on the river.

Third Bridge
Situated on a tributary of the Moanachira River on the Western side of the Moremi Game Reserve, the camp is located at the third “bridge” from the South Gate entrance. As these bridges are made from mopane poles, one needs to drive carefully when crossing them.

A small tuck-shop at the reception entrance gate has a stock of basics − tins of food, Peaceful Sleep, clothes-lines and pegs, dishwashing liquid and washing powder. They also have ice-cold beers, wine, and spirits.

It is illegal to pick up wood in the reserve, so either bring your own, or buy from the tuck-shop. Walking is prohibited except within the campsite.

This camp is situated on the banks of the Boteti River in the Makgadikgadi Pans National Park. We accessed the camp through the Western Gate via the little hamlet of Khumaga that is just off the Maun-Rakops road.

There’s no petrol in Khumaga, so fill up in Maun or Rakops. There was a really lekker ferry trip across the Boteti River.

The 10 campsites are serviced by two neat, clean ablution blocks. Some of the sites are shaded, but a recent fire (caused by a build-up of grass seed on a vehicle) burnt down a lot of the shade, although it’s recovering well. Each site has a braai, a fire pit and a large monkey-proof refuse container. Keep an eye out for monkeys. The camp isn’t fenced, and a large elephant walked through the campsite on a few occasions.

As it is also sited on the banks of the Boteti River, lots of elephant, zebra, wildebeest and herds of zebra come down to drink at the river in the morning and at night. We had great lion sightings, and twice sat watching a pride stalk the zebra coming down to drink.

A 4×4 vehicle is essential, and reservations must be made well in advance.

These are 35.8km North-East of Nxai Pan National Park Gate on the A3. There are only two campsites, under a stand of baobabs. The campsite is directly across the pan from the historical Baines Baobab site. A 4×4 is essential, and you have to be totally self-sufficient.

The camp is situated on the border of Kudiakam Pan; it was added when the boundaries of the Nxai Pan National Park were extended. The camp is unfenced and undeveloped. Pre-booking and pre-payment is essential.