Is the DRC passable? Can one get through from one part of the Congo to the next? Big questions for an overlander. This is Dan Grec’s experience, on his way down Africa’s West Coast in a familiar Jeep Wrangler Rubicon…

My thumbs-up is answered with two honks, so I gently ease off the clutch. The slack goes out of the tow rope and I barely notice the additional dead weight the Jeep is hauling, such is low-range first gear in the Rubicon. I’m towing a pickup loaded with food sacks and locals that has broken down in the worst possible place. We’re on a narrow, slippery clay hill with dense jungle encroaching all around. We have stamped out of the first Congo, but are still crawling through the large no-mans-land and so we are, legally, in no country on Earth.

Slowly but surely I climb, with the Toyota and its many passengers always looming large in my mirrors. I can’t help but smile as we crawl across the dotted line on the GPS indicating the international border between the two Congos. 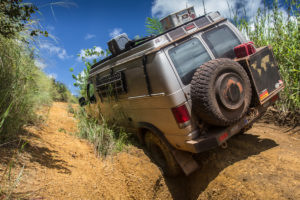 At almost two and half million square kilometres, The Democratic Republic of Congo (The DRC), which was formerly known as Zaire, is the stuff African legends are made of. Countless epic tales like Joseph Conrad’s The Heart of Darkness have been based there, and Africa was often referred to as ‘The Dark Continent’, because so much of Zaire went undiscovered and old maps simply showed enormous solid black areas. Modern-day DRC is widely believed to hold the richest mineral reserves of any nation on Earth: trillions of dollars’ worth of diamonds, gold, and rare earth metals lie undiscovered, and it’s estimated to contain over five billion barrels of oil. Despite this immense wealth – or possibly because of it – The DRC is one of the most dangerous and least functioning countries on earth.

King Leopold of Belgium first enslaved the region in 1884, setting the scene for a long line of violent figures who pillaged and exploited in any way they could. The infamous President Mobutu Sese Seko ruled with a brutal iron fist for over 30 years and is estimated to have personally pocketed up to $15 billion. While his family flew on the Concorde for weekend getaways to Paris, millions of his countrymen suffered and died as a direct result of his cruelty. In 1997 Mobutu fled the country, leaving behind, “a feral state of lawlessness and brutality,” as it was famously once described.

Recently, the capital of Kinshasa rates among the top five most dangerous places on the planet. Citizens are protesting the lack of a promised presidential election. Knowing he will be voted out, President Kabila is indefinitely pushing back the election. Protesting in Kinshasa can quickly turn violent and typically means burning cars, shooting, and rioting in the streets.

While The DRC is certainly not the safest place to explore, it contains vast swathes of the most remote and least-explored regions on the planet. For this reason I have long felt drawn to the Congo, and I’m approaching with a mixture of awe, respect, and fascination.

To cross the DRC

There is no getting around it; traversing the West Coast of Africa requires crossing the DRC one way or other. My challenge is to find a safe way to do so. Usually a river as big as the Congo would be the international border between two countries, though this is not the case with the Congo River. Downstream of Brazzaville/Kinshasa the river is completely contained within the DRC, so even if I can successfully cross to the southern bank, I will still have many hundreds of miles to travel in the DRC.

After scouring maps and planning for months, I focus on a seldom-used route that I’m well aware is at the upper limit of my capabilities – and that of my Jeep’s. Leaving Dolice, in the Republic of Congo, I will move south to Londela-Kays to exit the first Congo. From there I will attempt to drive the smallest tracks to a border crossing, that may or may not function, before hundreds of kilometres on virtually non-existent and muddy roads to the mighty Congo River. I hope to use a ramshackle ferry to cross, before another hundred kilometres to reach the Angolan border. 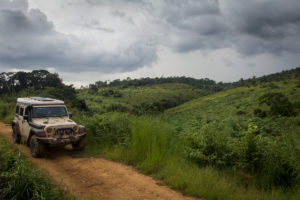 If it rains, all bets are off. It is entirely possible that zero vehicles get through for months during heavy rain. The dangers are real and the chance of recovering the Jeep if it gets seriously stuck are, for all intents and purposes, nil.

This is a heavy decision, the DRC is no joke.

In Dolice I again team up with my German friends, who are also looking to cross safety. We make a great team; always using our heads rather than racing on like the proverbial bull at a gate. Their beefy Sportsmobile (like my Rubicon) is equipped with a winch and front and rear lockers. Given what we’re certain lies ahead, the 37-inch mud terrains look very appealing. As we load up on supplies, fully expecting to be utterly alone for up to a week, I’m relieved to have friends with me for the biggest challenge of my life.

On the brink of disaster

Knowing we’re driving into the worst conditions we have ever encountered, we think it wise to put the lighter Jeep in front. If I get into trouble at least the Sportsmobile can winch me backwards. If the tables were turned, however, we both fear the Jeep would have no chance of winching the heavy Sportsmobile to safety.

After towing the stricken Land Cruiser over the crest of a hill, we glide downhill and when the driver pops the clutch the engine rumbles to life. Evidently it runs, it just doesn’t have a starter motor. Again we shake hands and bid farewell, and I feel butterflies in my stomach, as we dive deeper into the no-mans-land. I have been dreaming of the DRC for years and I feel a sense of excitement and also trepidation to be all-in. We don’t have a double entry visa for the previous Congo, so there is literally no turning back.

For a few kilometres I pick the way through grass taller than the Jeep before we discover what might be a road and slowly creep through muddy gullies, always aiming south. In one such gully I crawl gingerly up a steep and slick incline. With its narrow track and no wheelspin, the Jeep is able to skirt a major washout in the centre of the road.

My friends, however, are not so lucky. The combination of a wider track and increased weight proves their undoing. The immense torque of the big diesel causes the tyres to break loose, causing the rear to slide sideways and into the washout. Watching in my mirror, I’m relieved to see the Sportsmobile wedge into the washout at a 45-degree angle rather than flop right over.

After calming our nerves, in the course of a quick team meeting, we make a plan and get to work. Using my winch we secure the Jeep to a small tree – the only one in sight – and then winch the Sportsmobile off the back of the Jeep. We use all of our combined six traction mats in an attempt to bridge the washout and create a level surface that the Sportsmobile will have to climb through. We are soon pouring with sweat in the scorching sun, and each of us is thankful for the endless supply of cold water we have stockpiled in our fridges. A small crowd of locals gather to watch the show, all smiling and waving happily.

When we’re all set, I take a moment to evaluate our situation. Legally, we are in no country. We are way off the map and GPS, somewhere between the two Congos. I am stamping on the brake pedal so hard my leg is cramping, and the cooling fan in the Jeep has not cycled off once – so hot is the engine merely at idle. Behind and below, the 5.4-ton Sportsmobile is winching off the back of the Jeep, causing it to buck and squat under me. I watch anxiously in the mirror as a front tyre rises dangerously high into the air, and I begin to worry the Jeep will slide backwards.

Slowly and surely the monster van inches forward, while my friends keep a very close eye on progress. Unbeknownst to us all, the far rear tyre is extremely close to sliding back into the washout, dangerously close to disaster. One observant local man very loudly and clearly shouts, “Stop!” to our great thanks. 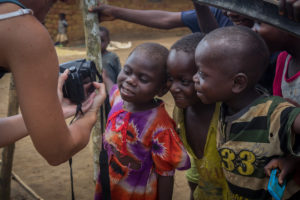 I knew The DRC was going to be an immense challenge, but this is ridiculous. We’re not even there yet!

When the van is finally free and we’re putting away equipment, the helpful local comes forward to introduce himself and shake hands. We’re extremely grateful for his timely intervention, to which he simply replies, “On Ensemble (We Are Together).”

After successfully extracting the Sportsmobile and treading gingerly through more deep mud pits, we arrive at a sizeable mud-hut village. At the edge of town we stop at a large log across the road, apparently the Immigration post. Soon a crowd of smiling children and adults forms, and after looking around I sense The DRC is different than anything I have experienced in Africa. Children and adults alike openly display child-like glee and joy, barely able to contain themselves. Their openness and welcoming manner radiates from them as a kind of unspoilt innocence.

Even the village feels different. The main street is wide and airy, the buildings are well maintained and spotlessly clean. Most strikingly of all, and for the first time in West Africa, I cannot see a single piece of trash.

A smiling man steps forward to declare himself the Immigration representative, eager to shake hands and welcome us to his country. The slender man is nervous and shy, and I sense he is deeply concerned about the long and detailed Immigration forms he hands each of us. After he spends a painfully long time explaining how and where I should complete my form, and after seeing his confusion and watching him point to the wrong line on multiple occasions, I realize this man cannot read or write. Though he is the official and it’s clear he needs the forms to be completed correctly, it becomes very clear he cannot do so himself. I now completely understand his concern and repeatedly assure him we are following his instructions to the letter.

After many false-starts and three identical and time-consuming explanations, he is eventually satisfied and grants permission for us to enter the country. Although he proudly carries a small stamp, he is unwilling to mark our passports, explaining we can get entry stamps further down the road.

Deeply concerned about bribery in The DRC, we have no intention of entering without the correct stamps. The always-prepared Germans produce an ink pad, and with the help of the gathered crowd we are able to sway the opinion of the now very helpful man.

As I have come to learn in West Africa, once I can convince a couple of bystanders of my point of view, they will go on to enlist the gathered crowd, and finally the person in charge. After many handshakes all around we continue forward, with everyone insisting we will find an actual road. Five minutes later, still hotly pursued by a crowd of playful children, we stop to write the date across the fresh stamp.

It’s not every day you get to write in your own passport.

Next month: Part 2 – Into the DRC and a major river crossing 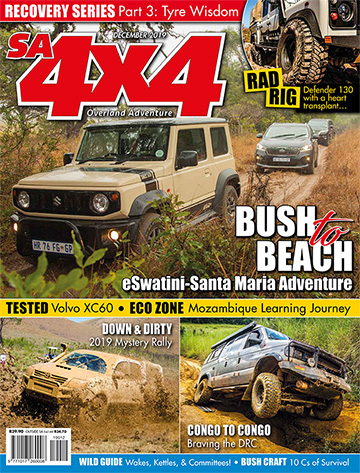 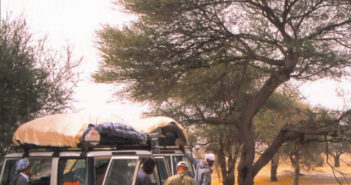 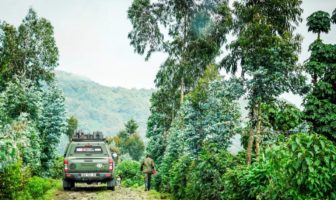 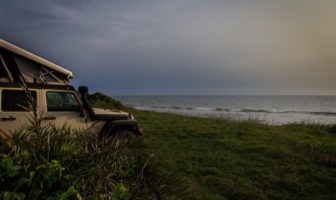 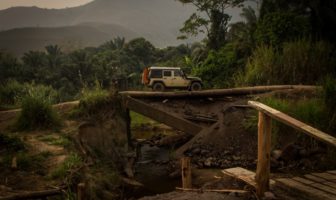