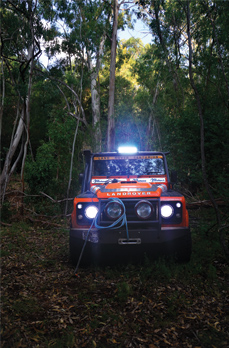 This year, for the 10th anniversary of the Defender Trophy, Land Rover Centurion pulled out all the stops and provided a fantastic week of action, camaraderie, and adventure.

The event was held on the magnificent Prynnsberg Estate in the eastern Free State, where the Maluti Mountains meet the Drakensberg to form a rugged sandstone background. Prynnsberg is situated a few kilometres from the town of Clocolan, and not far from the Peka Bridge border post into Lesotho.

I arrived in the middle of the action, missing the days of gruelling technical driving, but the 16 competing teams hadn’t finished with the adventure; I was in time to watch the group and spirit activities. Land Rover Centurion had put up a brand new Defender 90 as the winning prize – by far the biggest prize awarded yet.

No longer were there prizes for runners-up, or extras for each day; there was just the overall prize. Despite this, there was no tension or bad sportsmanship between competitors. Everyone was in the same situation, and they helped each other as if they were all in the same team. It was truly inspiring. While some seemed to take the challenges all too seriously, most of the competitors seemed to be there purely for entertainment. There was never a shortage of laughs, and definitely no lack of interesting characters – referring not only to the human competitors, but to their mascots, too.

Each team had to have a name, a flag, and a mascot. These ranged from a papier mache Speedy Gonzalez, to a giant black-panther soft toy, to a ‘lucky’ oil rag with a sewn-on face. The competitors treated their mascots as one of their teammates: carrying them across rivers, telling them it was all going to be all right, putting them to bed at night, and closing their eyes if the road – or lack thereof – became too scary.

It wasn’t all fun and games, though; many vehicles were damaged, and snapping side-shafts seemed to be the activity of the day. Happily, though a few mascots looked the worse for wear, no-one was injured and no-one had to pull out. Despite the damage to vehicles, the organisers of the Defender Trophy found a way to put a smile on everyone’s face with The Kak Move Of The Day award. This was presented each evening to a team who had done something truly cringe-worthy during the day’s challenges. One team had left the back door of their Defender open while driving up a particularly steep incline and lost all their recovery gear; and Nick Smart of team Vlakvark somehow activated his winch while it was wrapped around the bull-bar, creating a sort of Angry Birds effect.

The entertaining Team Vlakvark, of Archie Coetzee and Nick Smart, ended up walking away with the Roger Rouessant Team Spirit Award. The trophy is a crumpled stainless-steel pot that was driven over by a competitor, Roger Rouessant, in the Land Rover Centurion Defender Trophy in the Kalahari in 2007. After obviously having come off second best, the pot was then mounted, and is presented annually to the team that shows the best sportsmanship, spirit, and camaraderie throughout the tournament.

On the last day of the Trophy there was the treasure hunt. Here, even though the teams were still scoring points, the day was strictly for fun. At the start, each team was given GPS points to each stage of the hunt which they had to find; especially tricky when the points led you to the top of a mountain, but you were not sure how to get there or which way was even possible. The activities included abseiling, feeding lion cubs, going to the jail cell which once held President Swart in 1914, drag-racing down the local airbase runway, and tubing down the Caledon River.

Every year, the Land Rover Centurion Defender Trophy incorporates an aspect of community upliftment. The final task of the treasure hunt had the teams making pancakes for the local old-folks home in Clocolan. They were awarded extra points if they could successfully flip the pancake on the first try. The ladies at Cloc-In found this extremely entertaining, and, in return, cooked lunch for all of the competitors. It was a good afternoon filled with smiles and laughter, and ended on a correspondingly high note when Land Rover Centurion presented a cheque of R20 000 to the Cloc-In Old Age Home. All in all, it was a successful tournament with plenty of entertainment. Not only did the contestants gain experience, but they learnt from each other, made fantastic friends, and provided the outlines of new campfire stories. I will definitely be there again next year, and hope to compete soon.