With my ‘better half’ in Johannesburg being fattened up for Christmas, I was left in Nairobi to sell the old truck and to ensure that the French shorty, which we’d been asked to deliver to France, was made ready for the desert. Apart from a flimsy aluminium roof rack, the French 88-inch had been left bare. The tyres were bald, there was only one spare, the springs were flat, and the shocks finished.

I set about planning how we were going to travel in the little Landy: where to sleep (we hated ground tents), and where to store fuel and water for an extended Sahara trip, along with food, spares, clothes, tools, the cooker, the cool-box… Unlike the French, we had enough of everything for fully independent travel; we needed to rely on no-one but ourselves.

I also had to fix old Gramps and find a buyer, and I needed to make enough cash to support myself for a few months. So, I hired myself out as a safari guide and took a number of backpackers into the reserves, and the little shorty was given a few long trips as a shakedown to discover any faults. There were none. It ran like a sewing machine.

I built a 100-litre fuel tank that sat on the floor at the back. It filled the space from behind the seat bulkhead to the back door, level with the wheel arches; and created a floor for our other stuff and the water jerries. That also meant taking off, re-tempering and adding new leaves to the springs, and attaching extended military rear shackles. I changed all four on my own, taking each spring (and my bandaged hands) into town on taxis. Acceptable tyres were found, and I filled them with decent tubes.

But the biggest challenge was to have a roof-top tent made. After sitting with a chewed pencil, I presented the design to some chaps in the back streets of Nairobi. They made a wooden folding frame using round dowels, with steel corner brackets on a marine ply floor. The metal workers made the brackets for folding, and a canvas bloke added the tent and cover. Amazingly, it worked. It was tough enough, too − I didn’t tie it down properly onto the roof when I took it back to camp to fix it permanently, and it crashed onto the road in front of a bus – and survived!

A buyer was found for the old man, and a price negotiated that realised more than we’d invested in him, but it was a sad moment when the Dancing Hippo wobbled out of Mrs Roche’s campsite with someone else at the wheel.

In February, a much less skinny Mandi arrived at Nairobi airport, where I stood holding a card with her name written on it. Well, it had been three months… “We’d better have a coffee,” I muttered. 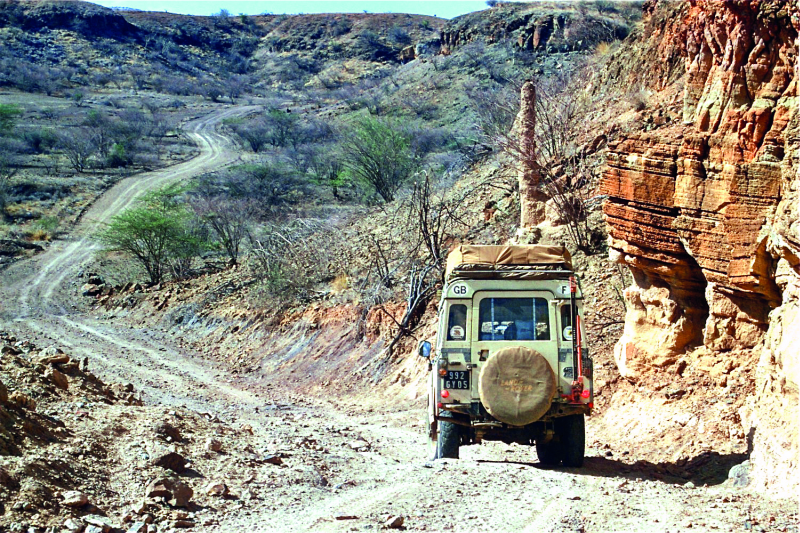