#1 THIS YEAR IS NUMERO TEN – one of the most epic, audacious and thrill-seeking events going, the Elephant Charge in Zambia is a 4×4 motorsport challenge and has reached its tenth anniversary. You do NOT want to miss this year’s show! The 2017 Fuchs Elephant Charge will take place at a secret location in the Zambian bush on Saturday 14 October 2017. Are you rrrrrrready?!

#2 EC PUTS THE FUN INTO FUNDRAISING – since 2008, the Elephant Charge teams have supported 17 wildlife conservation projects with grants totaling $647,991. This year we hope to round that figure off to a solid old $1 million bucks! That’s some serious FUNdraising right there. Much better than a sponsored silence! Well we think so anyway

#3 CONSERVATION THROUGH EDUCATION – is the main focus of the Elephant Charge’s impact. Many Zambian children sadly haven’t had the opportunity to visit their own national parks but through some of the EC projects they will. For example, Conservation Lower Zambezi bring groups of children into their education centre from schools surrounding the Lower Zambezi National Park. These future David Attenboroughs, enjoy game drives and boat cruises and learn more about the importance of threatened wildlife including elephants, wild dogs and pangolins.

#4 CONSERVATION THROUGH COMMUNITY – is also supported by the Elephant Charge e.g. through Conservation South Luangwa’s Annual Conservation Fun Run, now running for 8 years. The day starts with a 10km run for all ages and carries on with football, netball and volleyball matches. The event usually attracts in the region of 3,500 people and provides a neutral platform for community members and wildlife managers to discuss conservation of important local wildlife populations through sports and drama. People power!

#5 CONSERVATION THROUGH ANTI-POACHING – law enforcement is an integral aspect of conservation and through the Elephant Charge we have funded various organisations over the years in these efforts e.g. Conservation Lake Tanganyika to conduct marine patrols and Zambian Carnivore Programme to conduct anti-snaring work to protect lion, leopard, cheetah and other vulnerable carnivore populations throughout Zambia. Keeping those cats roarrrring just like our engines. 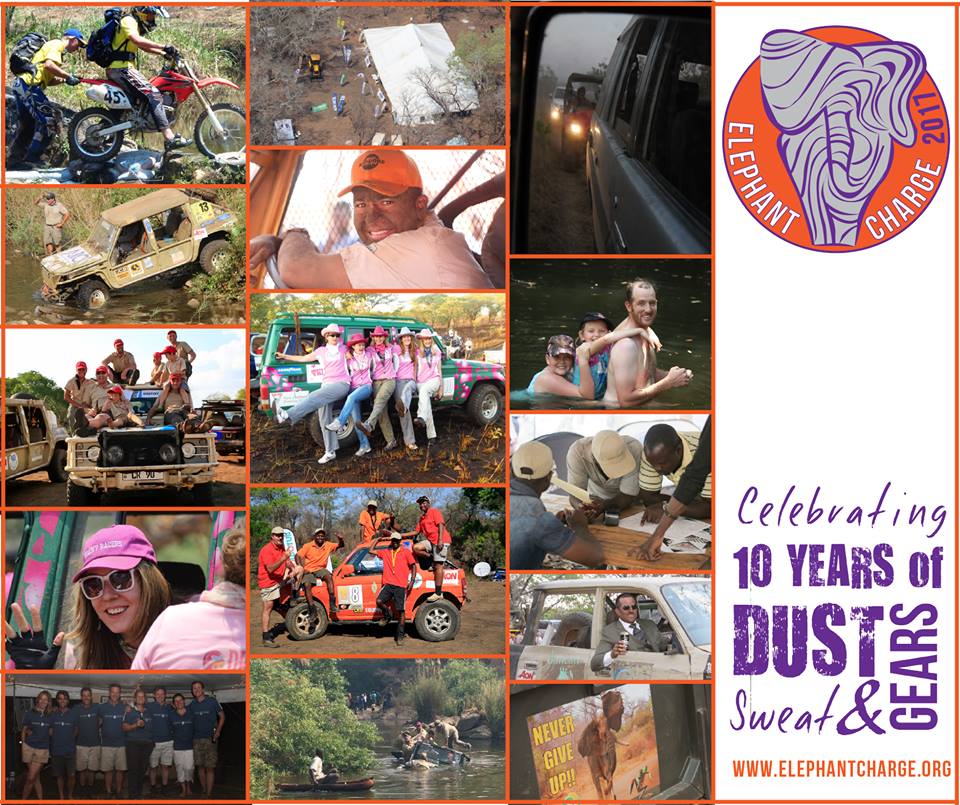 #6 CHECK OUT THESE CHECK POINTS! In order to raise all this lovely cash for conservation, the Elephant Charge relies on sponsors for various aspects of the event, including ten sponsored checkpoints on the course. Each checkpoint is manned, equipped and resourced by these wonderful people who really make the day for the teams with their snacks, drinks, braais, water sprayers and music systems (even cold towels and smoothies- who would believe it!) Last year’s checkpoints were sponsored by: Royal Air Charters, NWK, Aon, Maxxis Tyres, Afgri, National Milling, South City Church, Omnia, Kwikfit and Leopards Hill Memorial Park.

#7 ALL THE SMALL THINGS: as well as the naming sponsors, there are also many other people and companies who help make the event what it is. The Elephant Charge is run by a volunteer committee who donate their time and resources. What’s more, the Teams all go to huge efforts themselves to raise funds with their own sponsors and events. Everything donated above each entrance fee goes directly to the conservation projects of the year. Last year’s shortest net distance winners, The Carnivores have raised over $30,000 for conservation in Zambia – hardcore heroes!

#8 TEAM TACTICS – this really is the ultimate team sport. In each vehicle, you will find (well hopefully at the beginning at least!) a driver, a navigator, two long runners and two short runners. Communication is the key between all team members but of course when you see your long runners disappear off a cliff-edge a whistle, yell or walkie talkie (oops not allowed) would come in handy. And who is responsible for these well-oiled monster chariots,?! Again, more time and sweat donated by fanatic mechanics such as LA Sport Mudpackers (sponsoring both the CLZ Mudhogs and Hot Clutch this year) and other workshops such as Torktek, Autoworld and Automotive Performance Centre, throughout Zambia.

#9 LARGE AND IN CHARGE – so what exactly is the Elephant Charge you might be wondering?! The event takes place at a different, secret location every year usually not more than 2 hours outside of Lusaka. The teams start off with a cloud of dust and yahoos echoing around the escarpment at 0600 and have until 1500 to complete 10 precariously positioned checkpoints in the shortest distance. Winch wench what – I hear you say? Back and front is ideal. Down ravines and up cliff faces. Why go around when you can go over? The Gauntlet is the real test of mettle and is three proximate points generally located lethally around a river bed. Watch out because distance here is doubled! At the 2017 Fuchs Elephant Charge, Sausage Tree Team will be defending their 2016 title of shortest distance to a swathe of eager, ramped up, kitted out, challengers.

#10 DUST, SWEAT AND TEARS – Friendships are forged (and broken!) on this epic adventure through the African bush. Adrenalin pulses through your veins, fueled by a buzzing competitive energy resulting possibly in tears of exhaustion (maybe even frustration) but most of all, inevitably in the end, genuine laughter and comradery amongst team mates, charge mates and really let’s face it by now they are just darn good mates…

If you want to learn more about the Elephant Charge in Zambia either participating or sponsoring check out our: